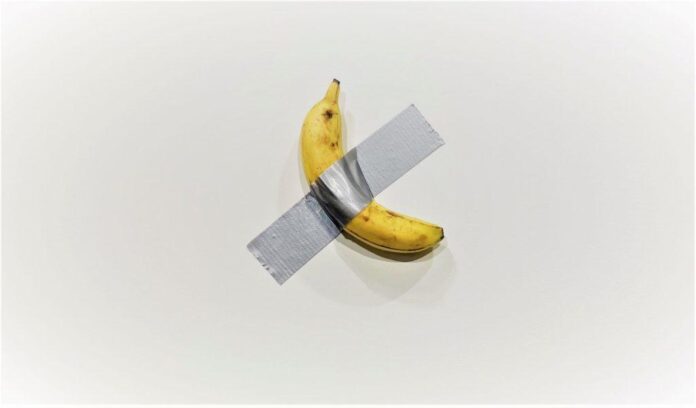 Italian artist Maurizio Cattelan failed to halt a lawsuit claiming that he copied another artist’s work in his viral sculpture of a banana duct-taped to a wall.

A federal court in Miami on Wednesday denied Cattelan’s motion to dismiss the litigation brought by American artist Joe Morford alleging that Cattelan’s Comedian infringes the copyright of his own work, Banana & Orange.

United States District Judge Robert N. Scola, Jr., stated in his ruling: “Thankfully for the court, the question of whether a banana taped to a wall can be art is more a metaphysical question than a legal one. But the legal question before the court may be just as difficult—did Morford sufficiently allege that Cattelan’s banana infringes his banana?”

Scola concluded that, at this stage in the civil suit, Morford has “adequately alleged that Cattelan’s Comedian has a substantial similarity to […] elements of Banana & Orange.”

Comedian was exhibited to much fanfare—and derision—on Perrotin’s stand at Art Basel Miami Beach in 2019. According to legal documents, the gallery sold three copies of the work, as well as two proofs, for a combined total of more than $390,000.

Morford, who is representing himself, claims that Cattelan plagiarized and inappropriately copied Banana & Orange, which he registered with the U.S. Copyright Office in 2000. The piece, from Morford’s “Sculptures: Still Life” series, comprises two green rectangular panels, the top one with a centered orange attached to it with gray duct-tape, the bottom one with a centered banana attached to it with gray duct-tape. Tape was also used around the borders, creating a vertical diptych. 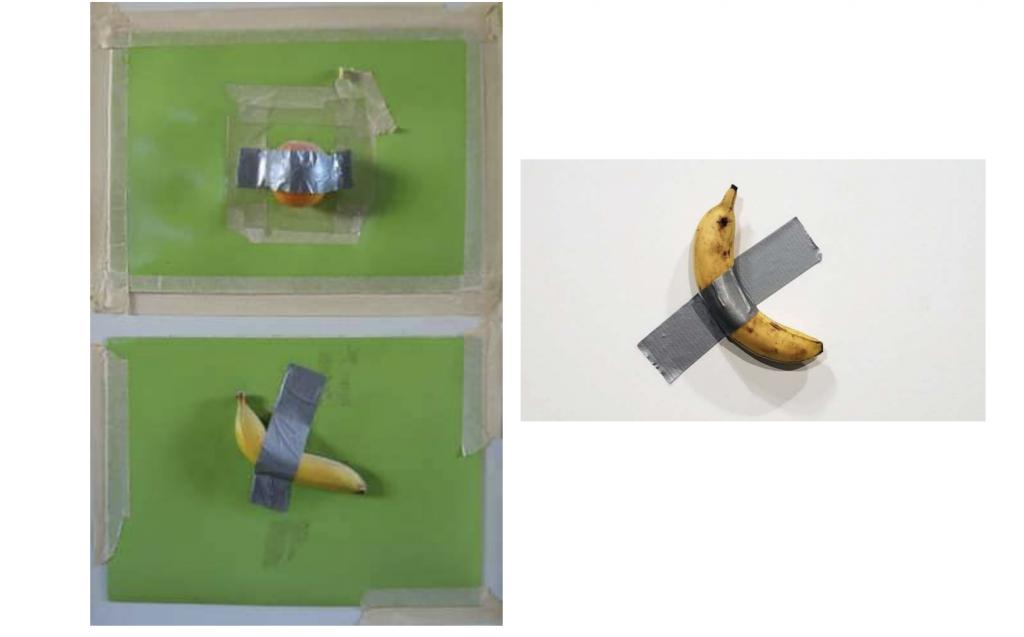 A side-by-side comparison of Morford’s and Cattelan’s works. Photo via court documents.

The judge found that Morford’s allegation of similarity between the two artworks stood up to initial scrutiny. “In both works, a single piece of silver duct tape runs upward from left to right at an angle, affixing a centered yellow banana, angled downward left to right, against a wall,” he wrote. “In both works, the banana and the duct tape intersect at roughly the midpoints of each, although the duct tape is less centered on the banana in Morford’s work than in Comedian.”

Cattelan’s attorneys, Adam Cohen and Dana Susman of the New York firm Kane Kessler, argued that the additional elements of the orange, the green background, and the use of masking tape borders in Banana & Orange “weigh against a finding of substantial similarity.”

But Scola found that the duct-taped banana “constitutes half of Morford’s work and has a prominent positioning” and that therefore “the alleged infringement of Morford’s banana is sufficient, quantitatively and qualitatively, to state a claim.”

Cattelan also contended that the “coordination and arrangement” in Banana & Orange is “not sufficiently original” to warrant copyright protection.

Cattelan further sought to invalidate Morford’s copyright claim by saying that the fruits in Banana & Orange are synthetic whereas the banana in Comedian is real, so Morford “cannot own the idea of a real banana duct-taped to a wall.”

Another question put forward is whether Cattelan would have been aware of the existence of Banana & Orange. Morford claims that footage of the work has been accessible on YouTube since 2008, on Facebook since 2015, and on his own website since 2016; it has, he reports, been “digitally accessed” in 25 countries.

But Cattelan argued that access could not be established “by mere Internet publication.” The judge found that “Morford need not establish that Cattelan had access, but only plausibly allege that he had access.”

Neither Cattelan’s lawyers Adam Cohen and Dana Susman from Kane Kessler, nor Joe Morford, responded to requests for comment by publication time.

The ruling came during a busy legal week for the Italian artist. A Paris court also recently rejected a claim from the wax artist Daniel Druet, who worked as an assistant to Cattelan, that he is the “sole author” of a number of the artist’s works.