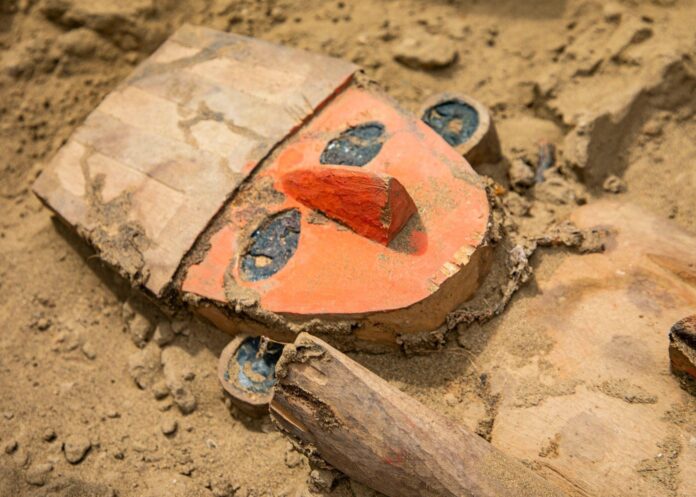 Archaeologists have unearthed a remarkably well-preserved Chimú sculpture in the Chan Chan archaeological complex in Peru, a region that was sporadically occupied between 600 CE to the colonial period.

The statue was found during an ongoing preservation project of the Huaca Takaynamo, a pyramidal structure within the ancient complex that archaeologists believe was primarily used for ceremonial and burial purposes.

The 47cm-tall statue statue dates to the early Chimú period (900-1470 CE) and is between 850 and nearly 1,500 years old, making it one of the oldest sculptures discovered at the site.

“The sculpture, in a perfect state of preservation, wears a cap with a trapezoidal cut at the narrow top [and] has a decoration of seven vertical bands of alternating light and dark colours,” according to a report published by the Peruvian ministry of culture last month. “The face is flat, oval cut and painted red. The nose, with a straight profile, stands out from the plane of the face. The almond-shaped eyes and circular ears exhibit uneveness, where a black resin is preserved that would have been used to affix mother-of-pearl plates.”

The Chan Chan archaeological site is located in the La Esperanza district in Trujillo, on the northern Peruvian coast. Like the statue discovered, the Huaca Takaynamo complex is surrounded by a well-preserved polychromatic mural that is not found in other parts of the archaeological site.

The sculpture was discovered alongside nectandra seeds, which have been associated with ritual human sacrifices in the Chimú culture and are believed to have psychoactive properties. Underneath the statue there was a small black bag decorated with brown and white thread. The finding reinforces evidence of the “ceremonial function of [Huaca Takaynamo] in Chan Chan”, according to César Gálvez Mora, the director of the preservation project.