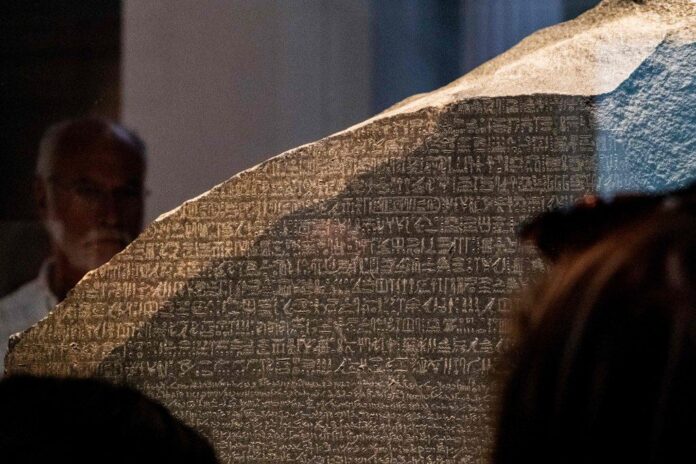 With a new petition, a group of archaeologists are calling on the British Museum to repatriate the Rosetta Stone back to Egypt.

Launched in September, the campaign urges Egyptian Prime Minister Mostafa Madbouly to submit an official request for the return of the stone and 16 other artifacts removed from the country by illegal or unethical means. The document has already amassed more than 2,500 signatures.

“Previously it was the government alone asking for Egyptian artifacts,” Monica Hanna, an archaeologist who co-founded the restitution campaign, told CBS News this week. “But today this is the people demanding their own culture back,”

Hanna predicted that the stone and other objects are “definitely” going to be repatriated, “it is just a matter of when.”

The Rosetta Stone was discovered in 1799, the year after Napoleon invaded Egypt, by a French officer who was supervising a dig in the Nile Delta city of Rashid. With texts in three different languages—Greek, Demotic, and Egyptian Hieroglyphs—the object was seen as a cross-cultural translation key that could yield unprecedented insights into ancient civilizations.

“History cannot be changed,” the document goes on, “but it can be corrected, and although the political, military, and governmental rule of the British Empire withdrew from Egypt years ago, cultural colonization is not yet over.”

Representatives from the British Museum did not immediately respond to a request for comment, but a statement shared with Reuters noted that there has never been a formal request from the Egyptian government for the return of the Rosetta Stone.

While the Egyptian government has never requested the stone back, others in the country and abroad have. In August of this year, renowned Egyptologist Zahi Hawass rebooted his own campaign to convince European institutions to return three culturally significant relics—the Rosetta Stone among them—to Egypt.

While the push to restitute objects stolen during periods of colonization has gained momentum in countries across the world, the British government has shown little inclination to deaccession the many unethically sourced treasures in its biggest cultural institution. Just this week, newly elected U.K. Prime Minister Liz Truss said she does not support the British Museum returning the Parthenon Marbles to Greece.