Home News Introducing Dataism: the Art Movement We Need to Understand How Our World... 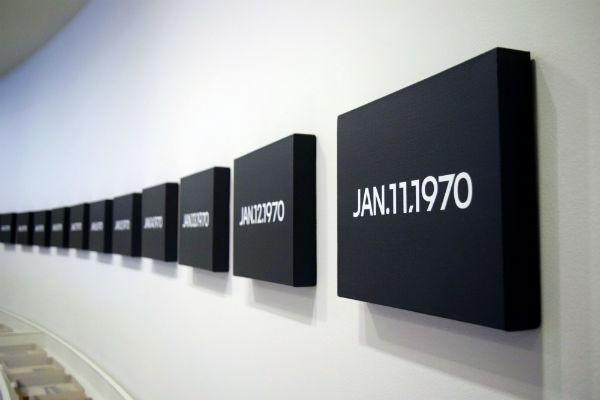 The 1961 Jasper Johns work 0 Through 9, which depicts the numerical figures stacked one on top of the other and scaled to fill the whole canvas, is art’s early acknowledgment of the important role that numbers play in our lives. Five years later, On Kawara began a series of small canvases, each painted with nothing more than the date—in simple white letters and digits—of its creation. His “Today” series, which now numbers more than 3,000 canvases, relies on the same indicators of numerical value as those found on Johns’s painting. Yet when Johns showed all numeric digits at the same time, he rendered them devoid of empirical information. Kawara’s numbers, by contrast, refer to a distinct, observable reality—specific days on the calendar—and therefore describe a quantifiable, chronological journey through the days of the artist’s life.

While Johns’s numbers owe much to Abstract Expressionism and Pop Art, Kawara’s pictures are forerunners of an art movement that is only now coming of age. I will call this new movement Dataism. 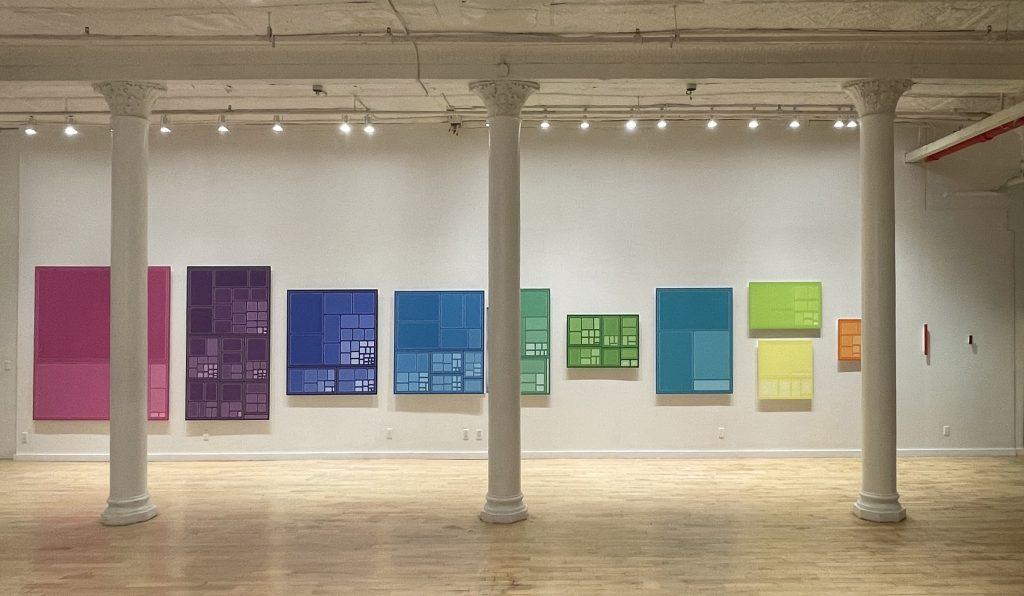 Interior view of the BarabásiLab exhibit at Postmasters Gallery, showing the “Philanthropy” series (2022). Each panel corresponds to one of the 12 areas of philanthropy defined by the U.S. tax code. The size of Art & Culture, in dark green, is proportional to the $37 billion arts and culture has attracted during the past decade. One of the small squares within that work captures the tiny weight of visual arts within the philanthropic ecosystem. Photo: Courtesy of Postmasters Gallery.

Dataism is an artistic practice that acknowledges how data has become humanity’s principal means of understanding nature, characterizing social processes, developing new technologies, and, increasingly, probing what makes us human. This way of making art is fueled by the conviction that art cannot escape, ignore, or bypass data if it wishes to remain relevant to the post-visual processes that shape our society.

The evolving social, economic, and technological factors that define our existence today are way too interconnected and far too complex for any single individual to grasp. To apprehend and respond to this reality, art must co-opt the tools that science, business, design, manufacturing, and politics have long adopted to engage with the world and spur change. If we want art to matter in the way science, medicine, and the global apparatus of modern finance all matter, then art, too, must learn to speak the lingua franca of our time, and of the future—which is data.

I am a network scientist who, after abandoning an education in art to pursue science, helped build a new discipline—network science—to explain how the complex genetic, social, and technological networks drive our societal and biological existence. Over the past two decades, I led a scientist-artist collective known as BarabásiLab that has helped invent the visual vocabulary of networks. This parallel journey in networks and art—the subject of recent retrospectives at the Ludwig Museum, Budapest, and ZKM Karlsruhe, Germany, as well as a current show, “BIG DATA (networking the artworld),” at Postmasters Gallery in New York—is what drove me to Dataism.

As a scientist, I have learned to appreciate the fundamental role data plays in our ability to detect, measure, describe, predict, and intervene in the processes that govern our world. Data helped Copernicus, Kepler, and Newton discover the physical laws that govern the movements of stars. Data is what economists rely on to document societal inequalities, what activists use to demand change, what politicians quote to justify policy, what educators rely on to refine teaching practices, and what your doctor leans on to offer a diagnosis.

Whether we consciously recognize it or not, data creates the imprint of the universe in our collective consciousness. In this moment of collective migration into digital and virtual realms, data has become, in a very tangible sense, our new reality. Dataism is art’s acknowledgment that humanity has already learned to listen to our universe and to navigate it, through data.

To be sure, contemporary artists frequently integrate into their practice the unique aesthetics of numbers and scientific and algorithmic symbolism. Examples range from Alfred Jensen’s The Number Paintings to Bernar Venet’s canvases depicting mathematical formulas to Ryoji Ikeda’s data-verse trilogy, which visualizes and sonifies information lifted from the Human Genome Project and CERN. These practices bring a common appreciation for the retinal beauty and associative power of information conveyed through data and math, exploiting their visual and cultural resonance.

Dataism, however, is about more than the embrace of the visual or aural symbolism of mathematical and algorithmic data. It is about the embrace of numbers’ capability to carry information, and thus to embody meaning. The roots of Dataism, then, are not to be found in Johns’s canvases. We can, however, discern its antecedents in Mark Lombardi’s exquisite pencil drawings, which graph hidden relationships between politicians, businesses, and terrorists; and in Hans Haacke’s politically charged installations, which link museum board members to corporate roles.

Yet these forebears could not practice Dataism as we understand it today.

Indeed, Lombardi’s and Haacke’s work can be described as a small-data practice, relying on manually collected information in which the challenges, ironies, politics, and even humor of data-gathering were as much a formative part of their art as the basis upon which their work’s meanings were extracted.

The Big Data revolution offers today’s artists an unprecedented ability to decode complexity through a wide range of new tools and techniques, shifting an artist’s role from data collection to curation, interpretation, contextualization, and messaging. 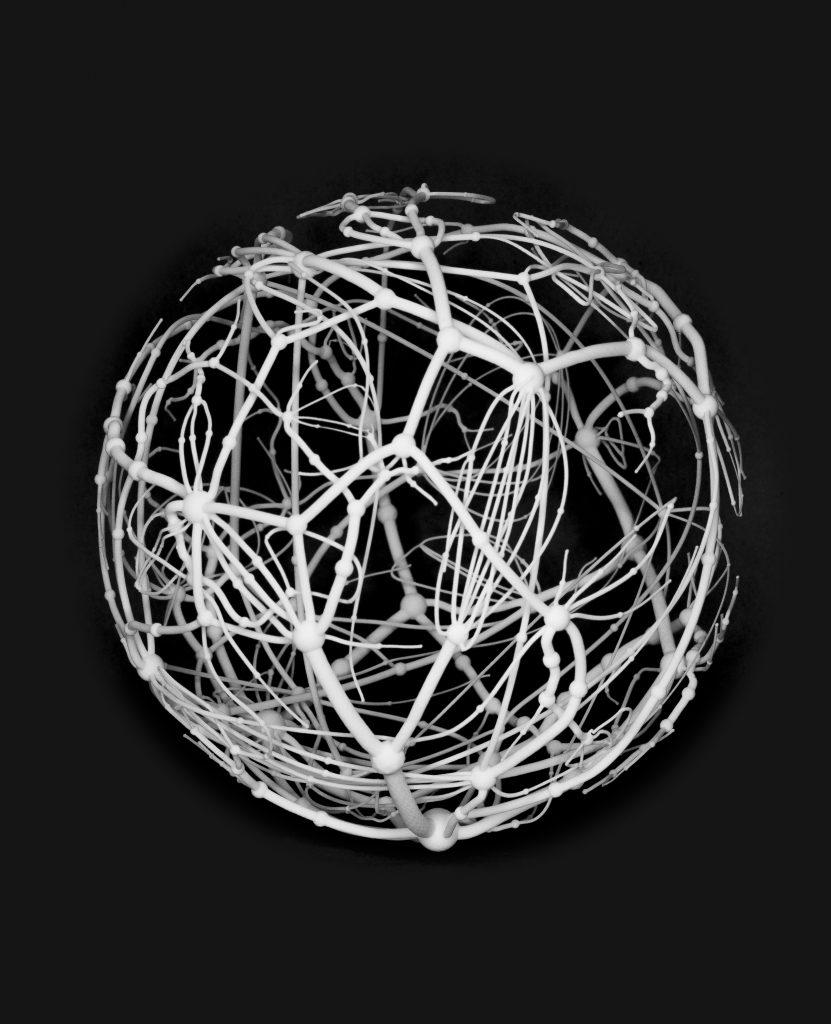 The Art Board (2019), by BarabásiLab, on display at Postmasters Gallery in New York, a data-driven look at the governance of art institutions, reinforces the role of the connectedness of the art ecosystem. Photo by Peter Puklus.

For example, in my lab, taking inspiration from Haacke’s earlier work, we were able to process the publicly available Form 990 tax documents of more than 600,000 nonprofits in the U.S., allowing us to identify the board members of every art institution. By reconstructing the network of joint governance through shared board members, we could observe the institutional landscape of art at a scale that was not imaginable before—and offer a visual representation of the power dynamics of today’s art.

It is tempting to see Dataism as a return to Plato’s idea of art as mimesis. But mimesis implies copying, an inherently imperfect attempt to reproduce reality. Copying is not what the Fake News network, which depicts the spread of the Pizzagate conspiracy theory, the first well-documented instance of political fake news, is about. Looking faintly like a sea squid, the image records each act of sharing by both humans and bots that allowed the fake news about alleged child abuse in a D.C. pizza restaurant to reach its massive audience on Twitter. The Fake News network is not a copy. It is, in fact, the most accurate rendition of reality as we know it. 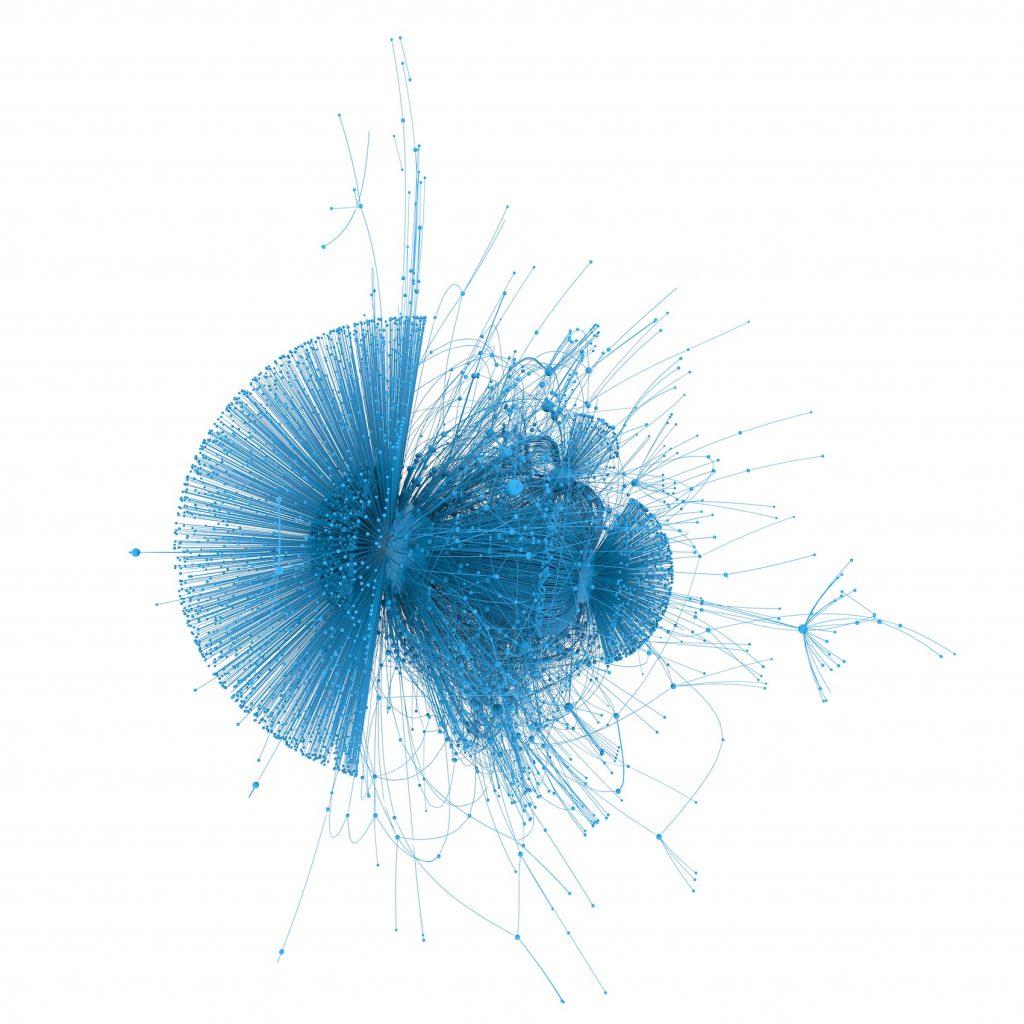 Fake News (2018), by BarabásiLab, captures the spread of tweets sharing the #pizzagate hashtag on Twitter.

Put another way, Dataism goes beyond mimesis by accurately rendering dimensions of reality that lie underneath its visible surface. Realism or naturalism is art’s attempt to represent the subject matter truthfully, as the human eye can discern it. Yet realism, being retinally governed, is focused on depicting only what is visible. In contrast, Dataism captures a reality that transcends—or underlies—physicality. It documents, like an X-ray of sorts, invisible but objective societal processes, connections, associations, affiliations, correlations, causes, aspects, and consequences of reality that are simply not accessible to retinal art.

The road ahead for my fellow dataists is full of both challenges and opportunities.

Humanity is facing a complexity explosion. We are confronted with too much data for any of us to make sense of. At the same time, we ache to grasp the big picture; we seek synthesis. The traditional tools and mediums of art, be they canvas or chisel, are woefully inadequate to this task. With Big Data shaping our life to a degree that is no longer possible for art to ignore, today’s and tomorrow’s artists can embrace new tools and mediums that scale to the challenge, ensuring that their practice can continue to reflect our changing epistemology.

Of course, data can both empower and limit us. A data-driven society is prone to algorithmic and data biases, walking a fine line between utopias and dystopias. Artists embracing Dataism therefore have an opportunity to address the power of data to limit our actions, to constrain individual freedom, to empower biases and discrimination, and to critically explore the many implications of a society’s over-reliance on data.

“It is necessary for a painter to be a good anatomist, so that he may be able to design the naked parts of the human frame and know the anatomy of the sinews, nerves, bones, and muscles,” wrote Leonardo da Vinci, a conviction that prompted the young artist to dissect cadavers to master the architecture of the invisible that shapes the visible. His simultaneous curiosity for the arts and the sciences helped him become the defining creative figure of his era. If Leonardo were with us today, the same instincts and curiosity that drove him to anatomy would no doubt turn him into a Dataist.

The hidden architectures that shape the visible today no longer consist of muscles and nerves, but of data and networks. Dataism is our chance to bring art into alignment with a world of unfathomable complexity.