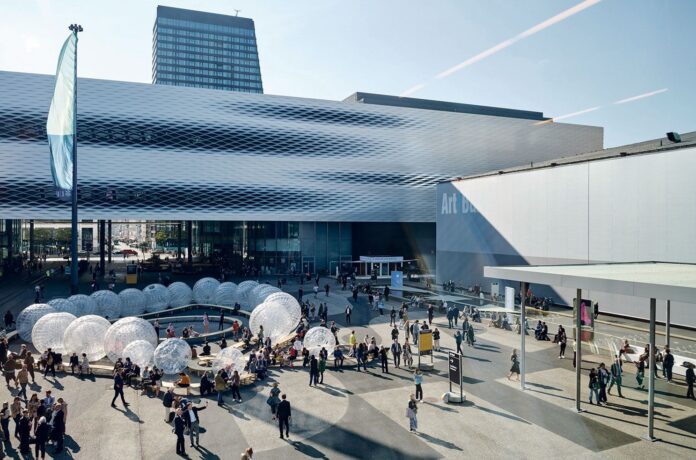 Art Basel returns to its traditional June dates for the first time in three years this week—and with it some semblance of normality. Gone are the masks and on-site Covid-19 testing, while visitor figures are expected to rebound to pre-pandemic levels. Gallery numbers are up, too: 289 compared with 272 last year (and 290 in 2019).

Cancellations, postponements and dramatic losses in attendance decimated the fair landscape in 2020 and into 2021, but Art Basel’s global director, Marc Spiegler, says the Swiss fair has emerged “quite strongly” from the pandemic. “What we’re seeing in terms of people applying to and planning to come to our shows is a continuation—if not an expansion—of the global art world,” he adds.

Art Basel’s stable footing can in large part be attributed to James Murdoch, whose private investment firm Lupa Systems injected SFr48m (€46m) into the fair’s parent company MCH Group in August 2020, becoming a board member and anchor shareholder (with 32.32% of shares) in December that year. As Spiegler says: “To his full credit, James jumped in at a time when other companies stepped back. There were various people who were considering investing in MCH and got scared during the pandemic, but James went forward.”

One such company, the investment fund XanaduAlpha, has recently renewed its interest in acquiring Art Basel, having first entered into negotiations with MCH in 2020. According to a report last week in the Basler Zeitung newspaper, XanaduAlpha has now offered MCH around SFr200m (€192m) for 70% of the Swiss fair, though a spokesperson for the parent company says MCH “has absolutely no intentions of selling Art Basel”.

The group is now planning a further capital increase, with the two anchor shareholders—the canton of Basel-Stadt and Lupa Systems—to invest between SFr27m and SFr34m (€26m-€33m) each. This will “secure liquidity for the refinancing of [MCH’s] SFr100m bond and the further development of the company”, according to an online statement. It is expected the parliament of Basel-Stadt will approve the investment, though the leader of the Green Liberal Party, David Wüest-Rudin, is calling for an exit strategy to be included in the deal, allowing for a vote in two years’ time determining whether to keep the stake in MCH, according to Basler Zeitung.

In early March 2020, before the pandemic took hold, MCH predicted sales losses of up to SFr170m (€163m) for 2020. The conglomerate underwent restructuring into four divisions that separated out its art-related industries, its Swiss events, its venues and its “live marketing solutions” (in April that year, the US-based marketing division laid off 150 employees).

That situation was compounded by the axing of the Baselworld watch and jewellery fair—part of the Art Basel franchise—in April 2020 after its main exhibitors walked out and set up a rival fair in Geneva (its main sponsor, Swatch, bailed in 2018, citing the outmodishness of the fair format). The outlook remains bleak for the watch fair—Florian Faber, the group’s new chief executive “wants to leave Baselworld aside for the time being”, according to the MCH spokesperson. Instead, the group’s focus is “on new formats and new platforms”.

Expansion and investment are indeed once again on the agenda, with an earlier decision to halt the development of a portfolio of regional art fairs now reversed. Having pulled out of Singapore-based Art SG in November 2018, in January this year MCH decided to give it another go, buying a 15% minority stake in Art Events Singapore, the organiser of the Asian fair. “Our investment in Art SG is part of our strategy to support the growing art scenes and our galleries across Asia, which we see as complementary to our core business of running Art Basel in Hong Kong,” the MCH spokesperson says.

Hong Kong, however, is beset with its own problems, not least a tightening of political control from Beijing. Meanwhile, faced with some of the world’s strictest Covid-19 measures, many international dealers and collectors chose to stay away from Art Basel’s latest Hong Kong edition last month, while more than half of the participating galleries opted for satellite stands. The result was a much more subdued affair than in 2019, with the number of galleries participating around half that of pre-Covid levels.

Competition is also building in other parts of Asia. Frieze launches its Seoul fair this September, while Tokyo Gendai, a new fair announced last week, is due to open in the Japanese capital in July 2023. Both events could help grow market hubs to rival Hong Kong.

Expansion is happening closer to the Swiss firm’s home, with the launch in October of Paris+ par Art Basel. MCH has stumped up €10.6m for a seven-year tenure for the new art fair, which is launching at the temporary Grand Palais Éphémère before relocating to the larger Grand Palais after renovations there are complete, expected in March 2023.

Spiegler anticipates the selection for the first Paris fair to be “one of the toughest yet”, with around 60% fewer stands (around 160 in total) at the Grand Palais Éphémère than at the other Art Basel fairs.

Paris was a natural choice, Spiegler says, as a city that is attracting “some of the most important galleries in the world”. David Zwirner, Mariane Ibrahim and White Cube have recently moved in, while Hauser & Wirth recently announced it will also open its first gallery in the French capital next year.

Private collectors are also setting up museums in the French capital on an unparalleled scale, adding to the city’s momentum. There is François Pinault’s Bourse de Commerce, the Cartier Foundation’s move to enormous new premises beside the Musée du Louvre in 2024 and the Hotel de la Marine on the Place de la Concorde. Add to that a new crop of museum directors at the Louvre, the Centre Pompidou, the Palais de Tokyo, the Petit Palais and the Musée d’Orsay and you have a “generational shift within the Paris art scene”, as Spiegler puts it.

This alone will not guarantee the success of Paris+, which ruffled feathers for ousting the longstanding Foire Internationale d’art Contemporain (Fiac), but the increasing attention on Paris will certainly help. Either way, it is a clear statement of intent from MCH.

As its spokesperson says: “MCH Group as a whole pursues a strategy of growth and expansion. We strongly believe there is a need and a desire for live exhibitions and trade fairs. If anything, the pandemic and the subsequent ‘return to (almost) normal’ have demonstrated that people are keen to meet in person again.”

What I Buy and Why: Digital Art Star Trevor Jones on the ‘Trad’ Artists He Collects and Using the Latest Tech to Display NFTs