Home News Met exhibition frames the kimono as a global transmitter of style, beyond... 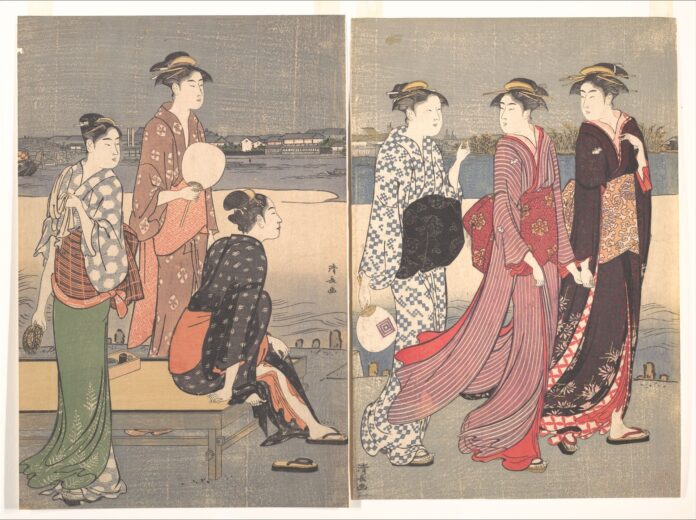 The Metropolitan Museum of Art has ignited a fervour for fashion exhibitions thanks to blockbuster events like its annual Costume Institute shows and the star-studded Met Gala extravaganza. This summer, the museum has the largest number of fashion objects on display in its history—concurrently running are In America: A Lexicon of Fashion, which opened in September 2021, In America: An Anthology of Fashion, unveiled this May, and Kimono Style: The John C. Weber Collection, which opened to crowds last week.

The latter, an exhibition spearheaded by the Met’s Asian art department, with loans from the Costume Institute, presents 60 examples of kimonos alongside Japanese theatrical costumes, battle attire, paintings, prints and decorative arts. The show reflects the museum’s growing emphasis on cross-departmental shows, which poses challenges when dealing with dress that can be classified as regional or ethnographic. Museum costume collections have long been critiqued as Eurocentric and, as a result, kimonos are often oversimplified, even stereotyped, in their presentation.

“I don’t like the idea of the designation of the kimono as ‘national costume’ because it freezes the kimono in time,” says Monika Bincsik, the Diane and Arthur Abbey associate curator for Japanese decorative art, who co-curated the show with Karen Van Godtsenhoven, previously a Costume Institute curator.

The curatorial framework of the show sought to convey Japan’s complex and ever-evolving fashion system, whose dissemination of trends parallels Western countries’. Organised chronologically and thematically, the exhibition traces the kimono from the Edo period (1615–1868), when sumptuary laws and social hierarchies dictated attire; to the Meiji period (1868–1912), when Western tastes and technologies (silk-railing machines and aniline dyes, for example) made the garment more accessible; to the end of the 20th century as social dynamics changed and women entered the workforce, and as the kimono became a vehicle for them to assert their agency and taste.

Globalisation and exposure to Japanese dress, primarily through woodblock prints, led to widespread fascination with kimono in the early 20th century. Just as the kimono’s liberating silhouette and cut—namely, the concept of creating a garment from a single bolt of fabric—influenced Paul Poiret’s and Madeleine Vionnet’s couture, Japanese makers incorporated Western imagery, ranging from foreign blooms, such as roses and tulips, to geometric patterns inspired by Piet Mondrian’s paintings and even Mickey Mouse.

“The kimono’s encounter with Western fashions has acted as a catalyst for many important changes to our contemporary wardrobe,” says Van Godtsenhoven. “These include gender neutral dressing, democratic and ample universal sizing, a sustainable attitude with respect for fabrics and materials, and freedom of movement for the wearer.”

At the core of Weber’s collection, these ready-to-wear kimonos were first produced around the 1920s and sold in Japanese department stores, which modelled their promotional techniques—think seasonal catalogues—after the likes of Wanamaker’s in Philadelphia and Harrods in London.

The final room of the exhibition focuses on contemporary ensembles by Japanese designers, including Rei Kawakubo and Yohji Yamamoto, and Western talents, such as McQueen and Cristobal Balenciaga. Bincsik believes, however, their interpretations of kimono are fundamentally different, stating: “Unlike Western designers, Japanese ones are already familiar with kimono structure, so they tend to be more philosophical in their approach. It’s about how the kimono can lead to new ideas.” Introduced in 1997, Issey Miyake’s revolutionary “A Piece of Cloth” (A-POC) line, for example, allowed customers to create their own garments from a tube of fabric by cutting along pre-knitted, dotted seams.

Set amid the restrained serenity of the Japanese galleries, where the delicate trickle of Isamu Noguchi’s Water Stone (1986) can be heard, Kimono Style offers a more contemplative, focused display of dress as opposed to the oft-overstimulating exhibitions many institutions are veering towards. Just like the kimono itself, the show’s power is its balance between clever simplicity and endless possibilities for interpretation.

The show underscores the increasing popularity of fashion exhibitions in museums. The Costume Institute exhibitions at the Met, for example, have increasingly drawn visitors to the encyclopaedic museum. The 2018 show Heavenly Bodies: Fashion and the Catholic Imagination, held in the Fifth Avenue and Cloisters locations, was the most attended exhibition in the museum’s history, drawing more than 1.5 million visitors. Two more Costume Institute shows also feature in the museum’s top ten: the 2015 China: Through the Looking Glass and the 2016 Manus x Machina: Fashion in an Age of Technology.

“Historically the Met’s exhibitions and collection displays tend to focus on particular areas of expertise and within a somewhat traditional art historical canon,” Max Hollein, the museum’s Marina Kellen French director, tells The Art Newspaper. “Exhibitions that are collaborations between different departments and that connect a diverse area of voices and experts invite new and more expansive ways of presenting art.”

This Artemisia Gentileschi Was Painted Over Because It Was Too Racy. Science Is Revealing Her Bold Original Vision