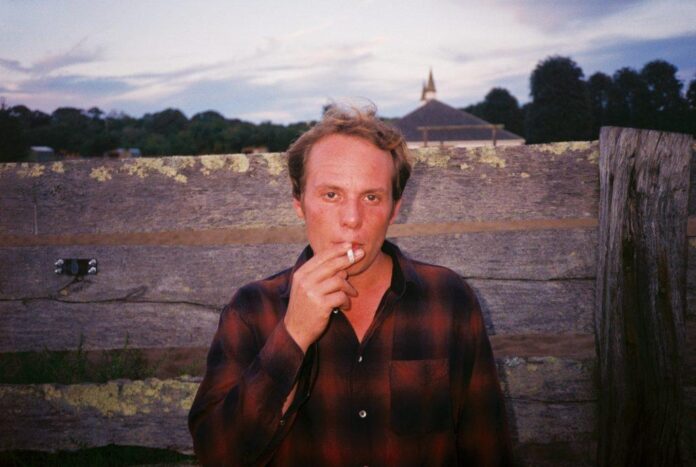 A NIGHT OUT WITH MAX LEVAI

School is officially back in session this week, and the dizzying flurry of invites and emails going out made me pine for one more weekendHamptons before the madness begins. So I asked art dealer Max Levai, whom I recently met at his art space, the Ranch out in Montauk, if he was around for one last blast of summer. Here’s what it was like...

4:53 p.m.: Max comes to meet me at the Montauk Jitney stop, and has to wait for several minutes until an incensed source of mine finally lets me off the phone (more on that in a future column…). Tanned from a long summer out East, Max looks like a swashbuckler. His manner of speech has a kind of California surfer bro lilt to it. A few weekends ago, when I first met Max at a day party out at the Ranch, I immediately thought that he would fit in really well with the Jackass crew. He’s got a reckless spirit.

5:04 p.m.: “Everyone that lives out in Montauk instead of, say, East Hampton or Amagansett or whatever, comes out here under the idea that they like , not ,” he explains to me over iced coffee while we walk his hound dog, Monday, down the strip. The “” he’s referring to is a sense of laidback egalitarianism: Montauk is the only place in the Hamptons where the beaches are public and you can get a cold beer for less than $10. The “” he’s referring to is the Hamptons that lives in the mind’s eye of most people: sprawling estates dotted with Bentleys, buxom hydrangeas, and linen-clad billionaires. On the way to the Ranch, Julian Schnabel drives past us in his Escalade, which suggests something about how salt-of-the-earth Montauk really is.

5:23 p.m.: Max tells me about the journey of getting the Ranch off the ground during the pandemic. While he was still working for Marlborough Gallery, the family business, his friend asked him to come out East and stay at his motel while it was vacant. The Kubrickian offer appealed to Max, as his puppy was graduating into a hunting dog’s energy level. “This was before I really knew there was any issue, and I was working from here. Then my whole world kind of changed,” he said. (In September of 2020, Max was caught in a legal standoff with the gallery, where, at the time, he served as president. It’s a lot of back and forth that ended with Levai leaving the gallery entirely and eventually opening the Ranch.) 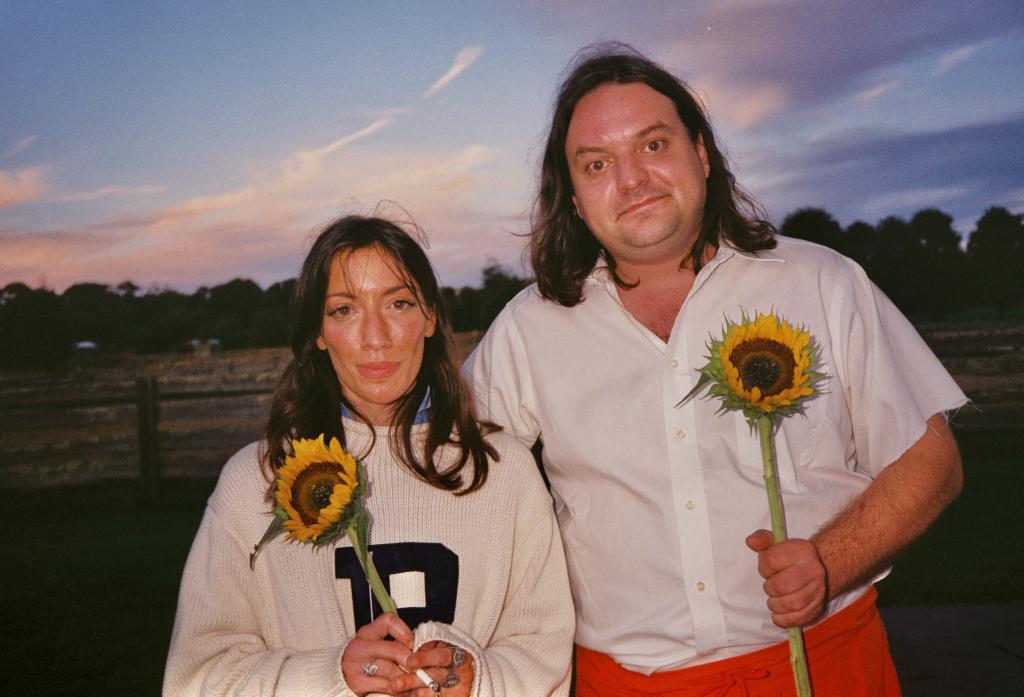 Jamian Juliano-Villani and Billy Grant at the Ranch. Photo by Zach Sokol.

6:12 p.m.: We walk up to his house on the estate, just up the hill. He points out his favorite horse on the Ranch, Blue, a palomino pony who he’ll get to see compete in a cutting competition this fall. (The actual rancher across the street handles the equine component of the operation out here.) We start with a bloody Mary, and Max lights a cigarette on the stove. While he smokes, I check out his personal art collection: a Darren Romanelli quilted couch, some custom-made books on the fireplace mantel by Justin Lowe and Jonah Freeman, several Genesis Belanger sculptures, the painting  by Peter Cain, a Werner Büttner piece, one of Jo Messer‘s paintings from her recent show out here, among others.

6:46 p.m.: Noel de Lesseps stops by the house. The painter (and son of beloved Luann de Lesseps) had a show out here titled “The End,” and forgot to sign some of the paintings. We bop back down to the gallery space in his black stretch BMW station wagon, which he bought off a former sheikh of Qatar and has made a hobby of refurbishing. “I used this to cart around Frank Stella when he was here,” he said. “Come on, I’ll drive you around like the sheikh.” Off we went for a quick dip in the ocean at Ditch Plains.

8:35 p.m.: Back at the house, we try and fail to light a fire in his stone barbecue pit. No reason to fret though, more bloody Marys are procured. The lights of a car containing Jamian Juliano-Villani, Billy Grant, and Alex Shulan appear at the base of the driveway. 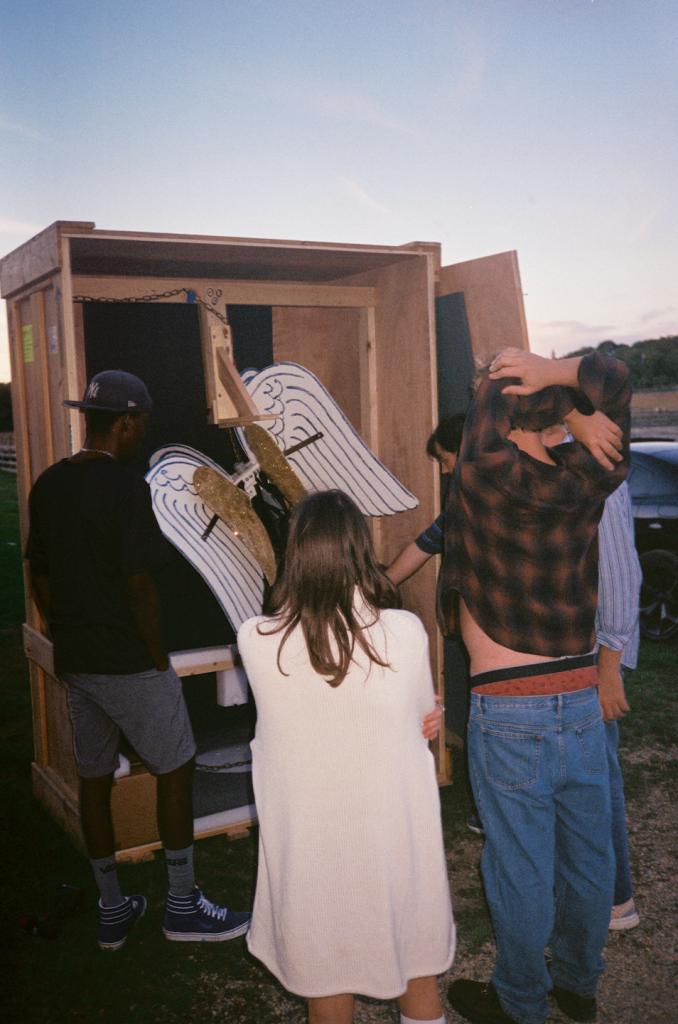 Jamian and Max help unload a Mike Kelley sculpture for the show. Photo by Zach Sokol.

8:39 p.m.: “I’ve gotta take a tequila shot like, .” I hear the unmistakable rasp of Jamian’s voice. The three of them all seem grated from the commute out here, but it doesn’t take long for the wheels to start turning for a reliably O’Flaherty’s-esque evening. I find out that the duo behind the art world’s most buzzed-about gallery have nearly secured a new spot, as their current lease on Avenue C and East 4th is ending. It feels almost too perfect that it would be in Andy Kaufman’s former apartment on Avenue D. Billy shows me a video of the apartment that looks like a frat house from planet Meow Wolf. Apparently Kaufman did all the tiling in the house himself. “It was his gusto,” confirms Billy.

9:03 p.m.: Jamian says she believes the Ranch is haunted because last time she was here, she and Billy saw a ghost of a woman in a long white gown walking down Old Montauk Highway. “We pulled over and we were like, ‘Yo, are you okay?’ And she was like ‘Yeah I’m fine.’ We wanted to make sure this bitch was okay! Like two hours later we see her walking still in this low-laying fog, way far away from where we first saw her.” This actually isn’t the first time I’ve heard Jamian tell me about a brush with the supernatural. She tells the story with such gravitas that I’m inclined to believe her. “Let’s do shots!” Max exclaims. We load into the hearse-like BMW for the Dock, a local dive. 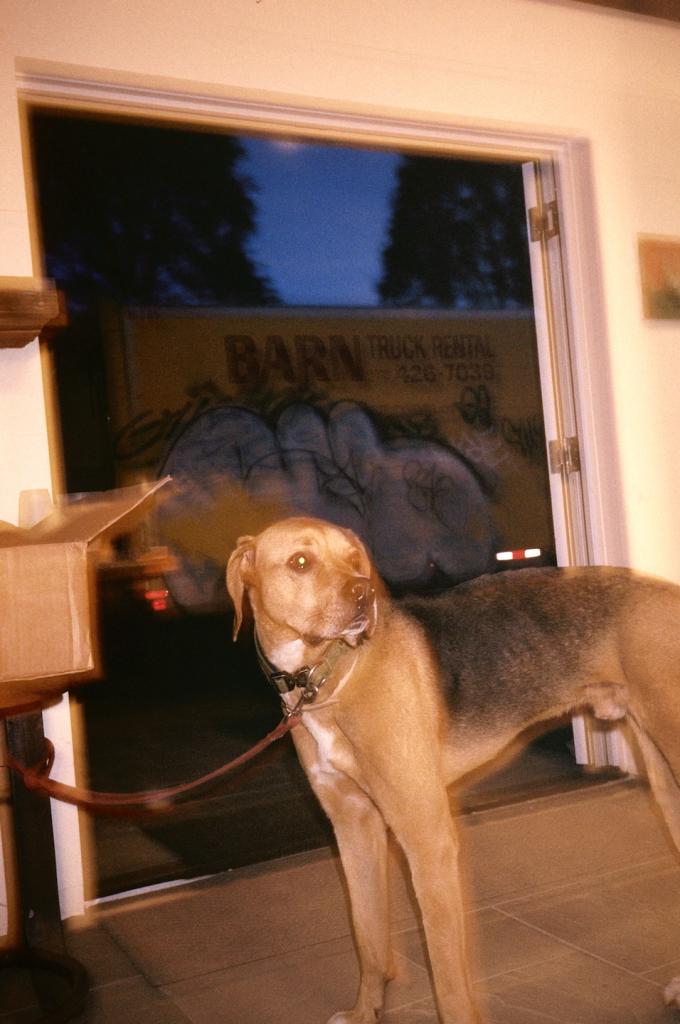 9:46 p.m.: A sign outside the Dock warns that cellphone use is strictly prohibited, which is concerning to me because that is how I’m writing this story and I have no notebook. We congregate at the bar and Max and Jamian joke that the reason they had to postpone Jamian’s forthcoming show at the Ranch was because of a bad case of chigger-bites they got on a recent weekend jetskiing. “We legitimately thought we had monkeypox, it was so bad,” Jamian says. I used to get these growing up in Georgia. They’re gross.

10:10 p.m.: Painkillers are consumed at a dizzying rate. Jamian slaps a fake Cartier watch on my wrist that’s permanently stuck at 5:06. She won’t let me return it. Max and Jamian are discussing their plan for the install, which sounds like equal parts work and play. Max explains that part of the Ranch’s credo is to maintain the work ethic that true American ranches demand. “It’s the ranch mentality: when you wake up, you have to want to do the work.” This is the final note in my phone I have before a waitress catches me with my phone out. The rest of the evening remains in Montauk.

GUESS WHO’S BACK, BACK AGAIN 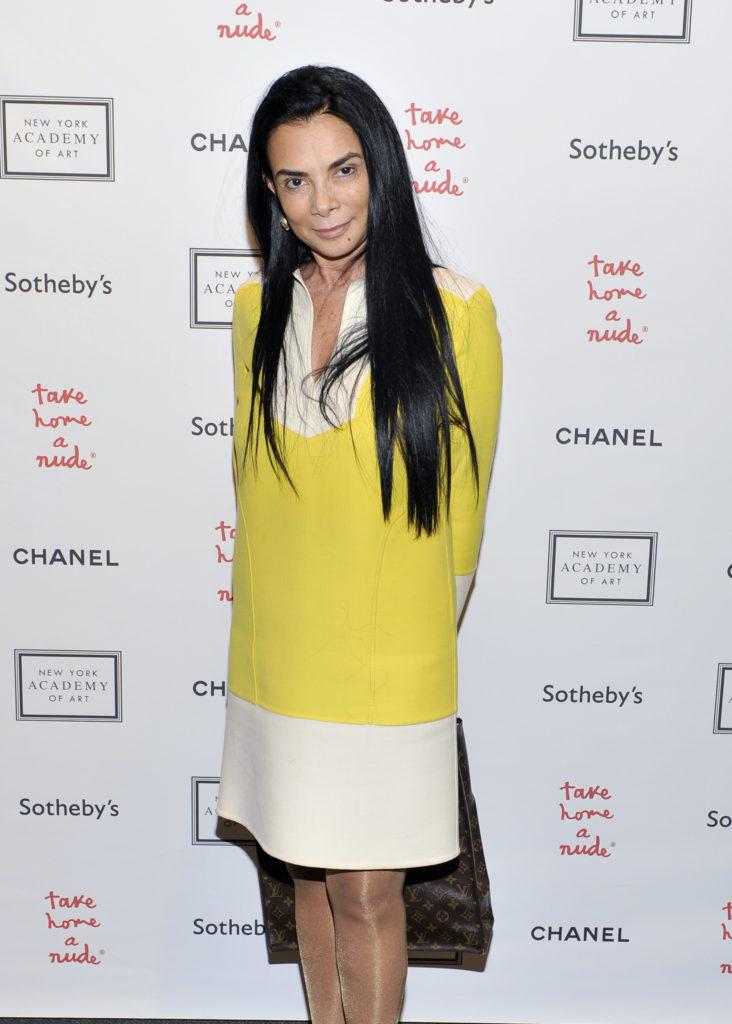 The last I heard from Mary Boone, she was out of jail and serving the rest of her sentence by way of community service at Free Arts NYC. As I’m sure you all remember (but I’ll remind you anyway), the infamous art dealer had been serving time for tax evasion  in the amount of about $3 million, and was let out early during the coronavirus pandemic under a court-mandated community service order.

Her original sentence from 2019 was for two-and-a-half years, and seeing as it is September 2022, it seems that sentence is complete and Boone is back in the game. According to sources, she’s now looking for a new space to restart the enterprise that launched the careers of Jean-Michel Basquiat, Ross Bleckner, Julian Schnabel, Barbara Kruger, and David Salle, among others.

I reached out to Boone to confirm this, but she declined to comment. From what I hear, though, she’s been looking since around late July or early August, and has been in touch with her old landlord about her former space in SoHo at 420 West Broadway, but is also looking around in the newly popular Tribeca neighborhood with a realtor.

But there’s a kicker. The final morsel of detail Wet Paint heard is that Boone isn’t looking alone. In fact, she’s looking alongside Leo Koenig, the gallerist whose brother, Johann Koenig, was accused of sexual assault last week in the Berlin-based newspaper Die Ziet. (Johann denies the allegations and plans to sue the publication for defamation.)

Leo Koenig couldn’t be reached, but personally, I look forward to Boone’s return to the art circuit. We need some fresh gossip!

… A Vogue profile reveals that Jennifer Lawrence and Cooke Maroney’s new baby boy is named after Cy Twombly … James Fuentes is leaving the Lower East Side for Tribeca at 52 White Street, which a press release described as “a beautiful column-free, cast iron building” … London’s Saatchi Yates gallery is moving from its current Cork Street space to a new location in the St. James neighborhood in January … A fire damaged Donald Judd‘s onetime office in Marfa during a restoration project last summer, but the shrine to Minimalism is undergoing extensive reconstruction, and will eventually reopen in spring 2024 … Sarah Meyohas’s crypto-venture BitchCoin officially has its own merch, the BitchCoin Cap, which sells for a modest $35 …

*** Sophia Cohen and Elena Soboleva both turning some looks at Burning Man *** I finally made it out to the Mnuchin-owned Léon out in Shelter Island, where your dear scribe enjoyed perhaps the best martini of her career *** Ashley Biden had her full security detail follow her around the Hamptons this weekend, with a late-night stop at the Ranch *** Robert Pattinson has curated a selection of works by some of his favorite artists, such as Willem de Kooning, Lynette Yiadom-Boakye, Richard Serra, and Julie Mehretu, for a Sotheby’s auction *** Cultural Counsel stalwart Marcella Zimmerman is hanging out a shingle to launch an affiliated creative agency, Digital Counsel, and has hired rising-star artist Alix Vernet and the ’s Gutes Guterman … Speaking of PR firms, Pac Pobric, Artnet News‘s longtime Wet Paint wrangler extraordinaire, is leaving our dear publication for greener pastures at Berlin Rosen—we’ve laughed, I’ve cried, Pac will be sorely missed! ***

In anticipation of this week’s utter mayhem in New York as we dive into Armory Week, I asked you to name the ultimate rookie mistake someone could make at an art fair. And as I write this from the subway between openings, a dinner, and an after-party, I think Morgan Spangle from the Dedalus Foundation hit upon the perfect anser: “going at all.” Couldn’t have said it better myself.

Up next: Who in the art world takes the best selfies? Write in your response to [email protected].

The Future of ArtPrize, America’s Most Popular Art Extravaganza, Looks Bleak as Its Board Quietly Disbands