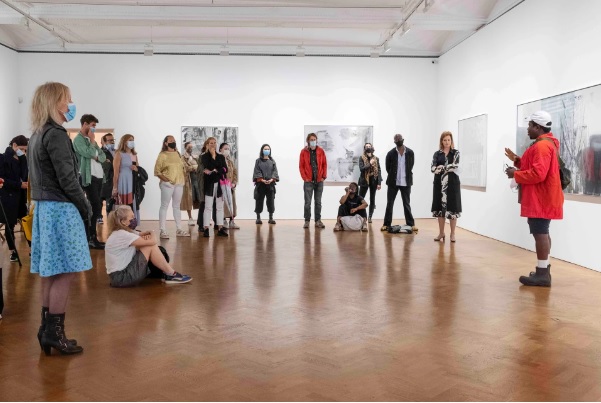 Where can you get to from Manchester for less money than a train to London? The mayor of Greater Manchester, Andy Burnham, caused a social media storm recently when he claimed it was cheaper to fly to Jamaica, Brazil or India.

And although the specifics of his figures were picked apart (booking in advance can net you a Manchester-London return for a lot less than the £369 Burnham claimed), the fact remains that travelling around the UK is an expensive business. Which is why for this year’s London Gallery Weekend, the charity Art Fund has offered to help foot the bill for curators from the UK’s regional galleries to come and visit the three-day event (13-15 May).

“Imagine you’re a curator in Cornwall and you’re coming to London,” says Art Fund’s director, Jenny Waldman. “That means train travel, staying overnight for a night or two in London—that’s quite an expensive trip already.”

Art Fund also saw an opportunity to develop the relationship between regional museum and gallery curators and London’s commercial galleries. “And just to repair the brilliant ecology of the museum sector—the damage that has been done by the pandemic means that people have not been travelling to see work, travelling to meet each other,” says Waldman. “It felt like it was a really good moment to bring people back together.”

Eighteen institutions across the UK, from Aberdeen in the north, to St Ives at the bottom tip of England, have been selected to receive funds.

One of the curators who will be visiting thanks to the fund is Katie Bruce, curator-producer at Glasgow’s Gallery of Modern Art (GOMA). She explains why it is so valuable: “Fundamentally some of it is about resources and funding across regional museum services. I think there is a common understanding that there isn’t money at the moment. We’re in Scotland so London doesn’t mean a quick day trip. Or you can do it but leave very early in the morning and are exhausted. So the funding enabled me to plan my time effectively, to use the sleeper to get three full days down in London. We don’t have the funding to do that in house.”

Having the Art Fund’s stamp of approval also helped justify the importance of the travel, says Bruce, especially for a council-run gallery using public funds.

Waldman hopes that London Gallery Weekend will enable the curators to network. “Just having the opportunity to see a lot of work, to meet the gallerists involved, to talk to each other and with the galleries about artists, to be introduced perhaps to some new artists whose work they haven’t seen before. All of those things are hugely advantageous for curators wherever they are.”

For Jemma Craig, an assistant curator at Southampton City Gallery who is early in her career, this is an invaluable chance to make contacts. “That will be a first for me, broaching and establishing those kind of links with commercial galleries. Southampton is in the running for City of Culture—hopefully I can be a conduit between this amazing event and bringing those benefits back to Southampton.”

TOP 5 Renaissance Paintings You Should Know