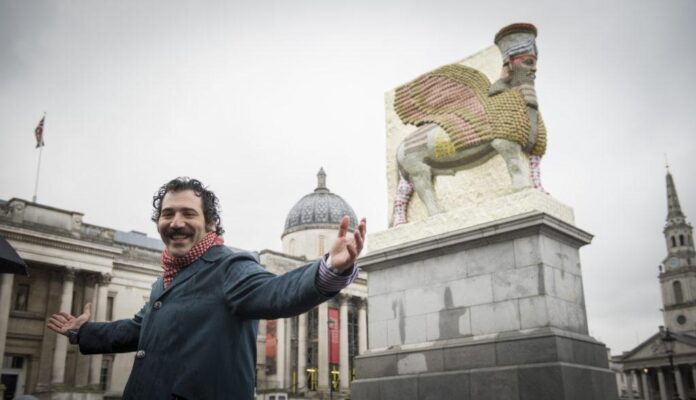 Berlin Nixes Repatriation Claims – German politicians have stressed there are no plans to repatriate the bust of Nefertiti or the Pergamon Altar, responding to comments made in the press by a deputy justice minister Saraya Gomis. Egypt and Turkey have long called for the return of the objects, which are star attractions at Berlin museums, and Gomis said that she felt the prized objects should be returned. (The Art Newspaper)

Milly Thompson Has Died – British artist Milly Thompson has died aged 58 from a brain tumor. Thompson was a founding member of the 1990s-era collective BANK and also known as an independent painter, writer, and performer. (Guardian)

Michael Rakowitz Urges British Museum to Swap Out Assyrian Sculpture – The Iraqi American artist has offered to donate a large-scale copy of an ancient lamassu, which he made using date syrup tins in 2018 as his commission for the Fourth Plinth in Trafalgar Square, in exchange for the repatriation of the ancient artifact to Iraq. ()

Curator Pleads Not Guilty to Child Pornography Charges – A once-rising photography curator in New York, Efrem Zelony-Mindell, faces life in prison on federal charges of possession of child pornography and attempted enticement of a minor. Zelony-Mindell, who has pled not guilty to the charges, was arrested after contacting undercover FBI agents about engaging in sexual activity with a child. (The Art Newspaper)

Nicolas Party to Create Mural for the Frick – To be unveiled this summer, the pastel mural will be inspired by a work from the museum’s collection, Rosalba Carriera’s Portrait of a Man in Pilgrim’s Costume (ca.1730). (Press release)

Chinatown Storefront Pays Tribute to Community – A storefront in Chinatown has become a space for local residents to reflect on experiences of Asian, Asian-American, and Pacific Islander people during the pandemic. The exhibition, “Archive as Memorial: Documenting A/P/A Voices During COVID-19,” is on view through March 25 at the former souvenir shop turned project space, Storefront for Ideas. (Hyperallergic)

Ariana Papoudemetropolous’s Madcap Adventures at the Louvre – The artist’s debut film work takes place on a roaming bed at the Louvre. The phantasmagoric film was commissioned as part of the museum’s “Louvre Looks” project, which will see 20 contemporary artists under 40 propose a three-and-a-half minute video relating to the museum. (Press release)