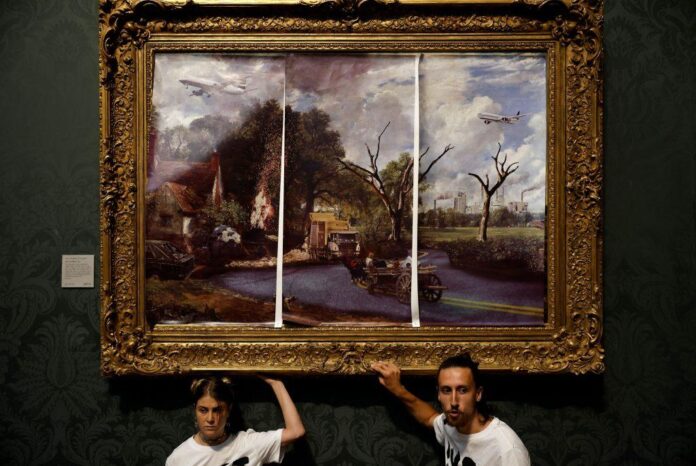 Miami Beach Sculpture Sparks Controversy – The public is debating whether the government should use city funds to buy art after Miami Beach bought a $80,000 installation by Cuban artist Juana Valdés consisting of 12 porcelain rags. ()

Breast Milk Performance Gets Artist Kicked Out of Fair – Anonymous conceptual artist OONA was kicked out of Satellite Art Show for staging a guerilla performance entitled, in which they produced breast milk in front of an audience and then put glasses of milk up for auction. ()

Climate Activists Found Guilty in Glue Stunt – A U.K. district judge has convicted two Just Stop Oil protesters of causing criminal damage to John Constable’s at the National Gallery in London. The activists, who taped posters of a dystopian version of the painting over its vitrine before gluing themselves to the frame, must pay £1,000 in damages. ()

Patti Wong Steps Down at Sotheby’s – After more than 30 years, Sotheby’s international chairman is retiring. She helped grow the auction house’s business in Asia to more than $1 billion annually. “Though I am stepping down—I will never go far,” Wong said. “Sotheby’s runs in my blood; we will always stay close.” ()

Met Gets $10 Million Donation – Philanthropist Adrienne Arsht donated $10 million to the Metropolitan Museum of Art to benefit the Met Live Art series, which is dedicated to contemporary performance. She gifted the department $5 million in 2020. ()