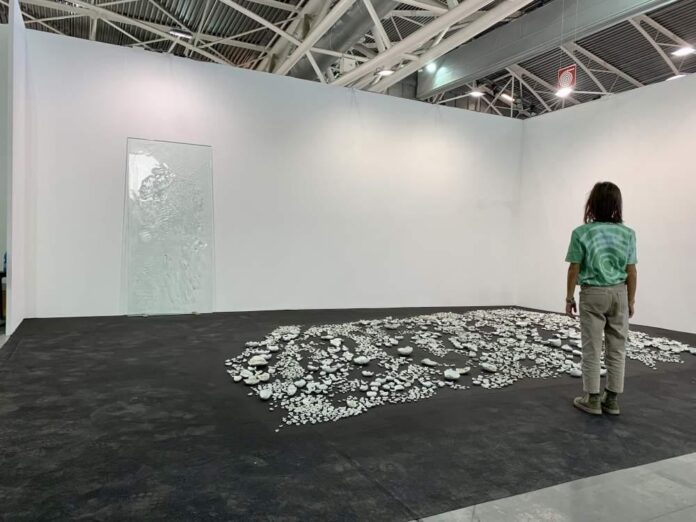 Zero masks, zero restrictions, catering and all services at full capacity—in the first post-pandemic Artissima fair in Turin (until 6 November), Covid is now a distant memory. Collectors, both Italian and international, have returned in large numbers from Europe and some even from America, thanks to the galleries—foreign for the most part, at 59%. There is a strong presence from Germany, Switzerland, France, Brazil and US.

The difficult years are not over, however. The pandemic has been followed by the war on the borders of Europe and an energy crisis. Art is still a refuge commodity and the desire to buy is there, but the market is more reflective, especially for an experimental and cutting-edge fair like Artissima, where 42 galleries are showing for the first time and where several artists are making their Italian debut.

Meeting museum directors, art advisors and curators remains one of the primary motivations for many exhibitors, who typically present works of reasonable size and prices in the medium-low range: most are under €50,000, with a minority of works up to €400,000. In rare occasions, works approach €1m (but this is for exposure rather than sales).

Given that expectations were calibrated, the first day was satisfactory. Recent drawings in the range of €1,000 to €5,000 by Ana Prvacki, a 46-year-old artist of Yugoslavian origin whom the Italian public got to know around 15 years ago at the Castello di Rivoli, sold well to Italian, Brazilian and German collectors at 1301PE (Los Angeles), according to its director Brian O. Butler.

A veteran of Artissima, and a member of the fair’s selection committee for many years, the Viennese gallerist Gregor Podnar is also present in the Drawings section, with Dan Perjovschi’s plates (€3,500 each). His booth in the main section features paintings, sculptures and photographs, ranging from €4,000 to €120,000, by Robert Gabris, Ivan Kozaric, Julije Knifer, Anne Neukamp, Nobuto Tsuchiya, Oho and Prioz Bizjak. “On the first evening we made a few small sales. Times are still difficult and the flow of collectors is not comparable with the best years, but it has returned to growth and this gives us hope for the coming days,” Podnar says.

The lower end of the market typically performs well at Artissima, as evidenced by the numerous sales below €10,000 on the first day. At the Galerie Urs Meile, based in Lucerne and Beijing, there was interest in photographs, sculptures and paintings by Swiss and Chinese artists of different generations and prices, ranging from €3,400 by Maio Miao to €30,000 by Urs Lüthi, with works by Mirko Baselgia, Marion Baruchi, Chen Zuo and Ju Ting at price ranges in between. “We have been coming back for a few years, we have made many important contacts who come back to see us, something has already been sold,” says gallery owner Karin Seiz.

In the same vein, Neck de Bruijn’s Amsterdam gallery Upstream offered a series of videos by the Dutch artist Jeroen Jongeleeen at €8,500 each. “They depict Jongeleeen creating drawings by running through the landscape for hours on end, an intervention that mixes Land art, drawing, video, performance, conceptual art, painting, minimalism, light and colour; some pieces have already been sold, to Italian and German collectors, but we are here more to meet directors and curators than anything else,” De Bruijn says.

Benedetta Spalletti of the Vistamare gallery from Pescara offers cautious but well-intentioned collectors an overview of her gallery’s artists, from the historical ones, such as Ettore Spalletti, Joseph Kosuth and Mario Airò, to the younger ones, such as Anna Franceschini, Lorenzo Scotto di Luzio and Claudia Comte; prices range from €6,500 to €270,000. “On the first day we laid the foundations for sales that I hope will be formalised in the coming days. People take time to mature their decisions, but there is a good flow of collectors. I have been doing Artissima for many years and I know that it can always bring surprises,” he says.

Happy with the first sales, Peres Projects (Berlin, Seoul and Milan), which is returning to Turin with a selection of loyal artists and some new entries, from Shaung Li, Donna Huanca, Ad Minoliti to Rafa Silvares, and prices ranging from €4,200 to €125,000. “The first day went well; we have been doing Artissima for many years, since 2014 we had not returned until last year, we hope to continue well over the next few days,” says the gallery’s director Benedetta Tuzzi.

At the highest price points, ‘home’ artists, both Italian and from Turin are doing well. They include Piero Gilardi, at Biasutti & Biasutti with recent works, and Giorgio Griffa, at the Roman Lorcan O’Neill with canvases from the 1970s, 1990s and the last 15 years, which are priced from €9,000 to €70,000, and are much appreciated by Italian and German collectors. “We are happy with the first sales, all in the middle range, we hope that the trend will continue,” says director Laura Chiari.

Further confirmation came from Tornabuoni, the modern and contemporary art giant that brings post-World War II art to Turin: a focus on Optical art (Alviani, Scheggi, Dadamaino, Castellani and new entries such as Francesca Pasquale), a small excursus on colour and abstractionism (Fontana and Albers, Dadamaino and Biasi) and a tribute to Turin-based Carol Rama and Mario Merz; prices ranged from €30,000 to €400,000, and even close to €1m. “We have made some substantial sales, to well-known collectors who already have works by these artists”, in particular “foreign collectors who are looking for more important works by artists from Turin or by Albers, who is well-known and appreciated by Anglo-Saxons and rare to find”, says gallery director Ursula Casamonti.

More caution, on the other hand, was found for lower-priced works by lesser-known artists such as Emel Kurhan, Aret Gicir and Silvia Bingaz (from €3,000 to €8,000) on the stand of Oktem Aykut (Istanbul), at their third Artissima. “Sales are not going very well, but they are not our priority, we are here to meet people,” says gallerist Doğa Öktem.

What Art Does Brad Pitt Collect? Here Are 8 Artists Whose Work We Know the ‘Bullet Train’ Actor Owns and Admires