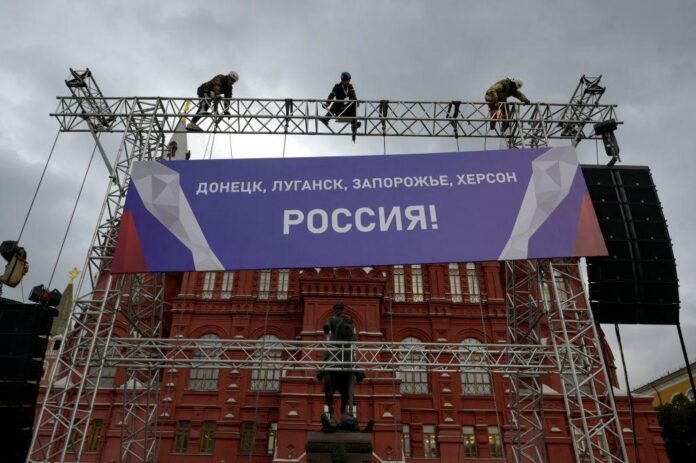 On October 19, Vladimir Putin imposed martial law in four Ukrainian territories illegally annexed by Russia. When he did so, he also effectively legalized the looting of cultural heritage in Ukraine, the Art Newspaper points out.

Per Russian law, the declaration of martial law grants the country the power to “evacuate” items of economic, social, and cultural significance. Kherson, Zaporizhzhia, Donetsk, and Luhansk are the four regions specified in Putin’s decree.

However, looting has taken place in the occupied Ukrainian territories now for months.

Russian troops removed a 21st-century replica of an 1823 statue depicting Prince Grigory Potemkin, who engineered the annexation of Crimea from the Turks in 1783. Soldiers also exhumed Potemkin’s bones from St. Catherine’s Cathedral in Kherson and transported them further into Russian-held territory, according to CNN.

‼️According the General Staff of the Armed Forces of 🇺🇦, in the temporarily occupied territory of the Ukrainian Crimea, the occupying authorities issued an order specifying the procedure for evacuating museums to 🇷🇺@MCIPUkraine appeals to @UNESCO https://t.co/UVqunEHvHQ pic.twitter.com/LCqseFV33w

On October 15, ahead of Putin’s martial law announcement, the Ukrainian ministry of Culture declared that the “evacuation” of Crimean museums will be considered a “war crime.”

“Mass removal of cultural values ​​from the territory of Ukraine by the Russian occupiers will be comparable to the looting of museums during World War II and should be qualified accordingly,” the ministry’s statement read, citing the Hague Convention for the Protection of Cultural Property in the Event of Armed Conflict.

“The actions of the Russian Federation are a violation of international law… Any seizure, destruction or willful damage to religious, charitable, educational, artistic and scientific institutions, historical monuments, works of art and science is prohibited and should be subject to prosecution.”

The culture ministry concluded with a plea to Unesco and “all international partners” to “prevent another violation of international law by the aggressor state,” to “refuse cooperation with Russian museums,” and to “counter the illegal traffic of cultural values.”

Mykhailo Podolyak, a senior adviser to Ukrainian President Volodymyr Zelensky, took to Twitter to say that the martial law decree should only be considered a”pseudo-legalization of looting of Ukrainians’ property.”

“This does not change anything for Ukraine,” Podolyak wrote. “We continue the liberation and deoccupation of our territories.”