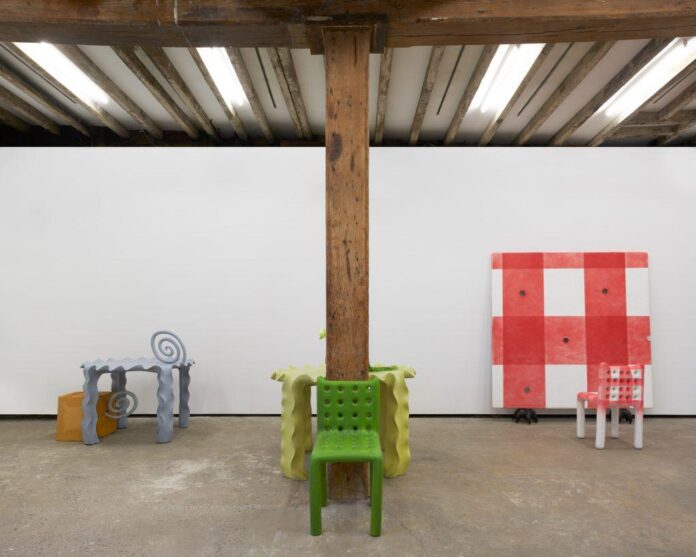 “Wholesome” is the first time Barger has displayed wall works, which are more conceptual in nature than functional. Also, they all have the word “interruption” in their titles. In a sense he is interrupting the world of design, in another sense he is interrupting the viewer who might have been ambling around the exhibition mistakenly thinking they were viewing objects of furniture rather than sculpture. The fact that some are also functional and can be used as chairs, shelves, coffee, and tables is simply a bonus. All the works are available for purchase and range from $5,000 to $24,000. 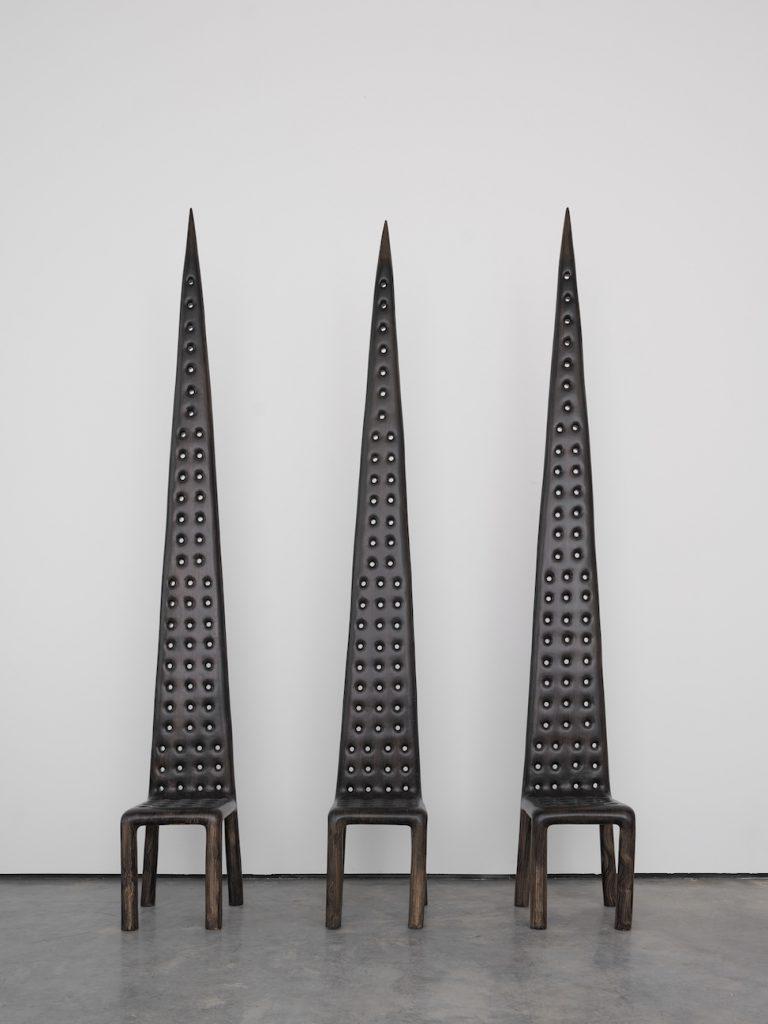 “Making something functional like chairs and furniture makes me feel useful,” said Barger. “I really value that in myself, being wholesome, coming from the Midwest, that kind of pride. But there is another side of wholesome and I want to push this narrative further with my wall works. I included traditional utilitarian objects like baskets and wooden chair seats and combined them with holes and images of the body.”

Barger has always used gingham as a placeholder for midwestern identity. His new works subvert this more pointedly; the holes are less grid-like and more spontaneous. “The holes interrupt the gingham, they pierce through it,” explained Barger. “They interrupt the sweetness.” 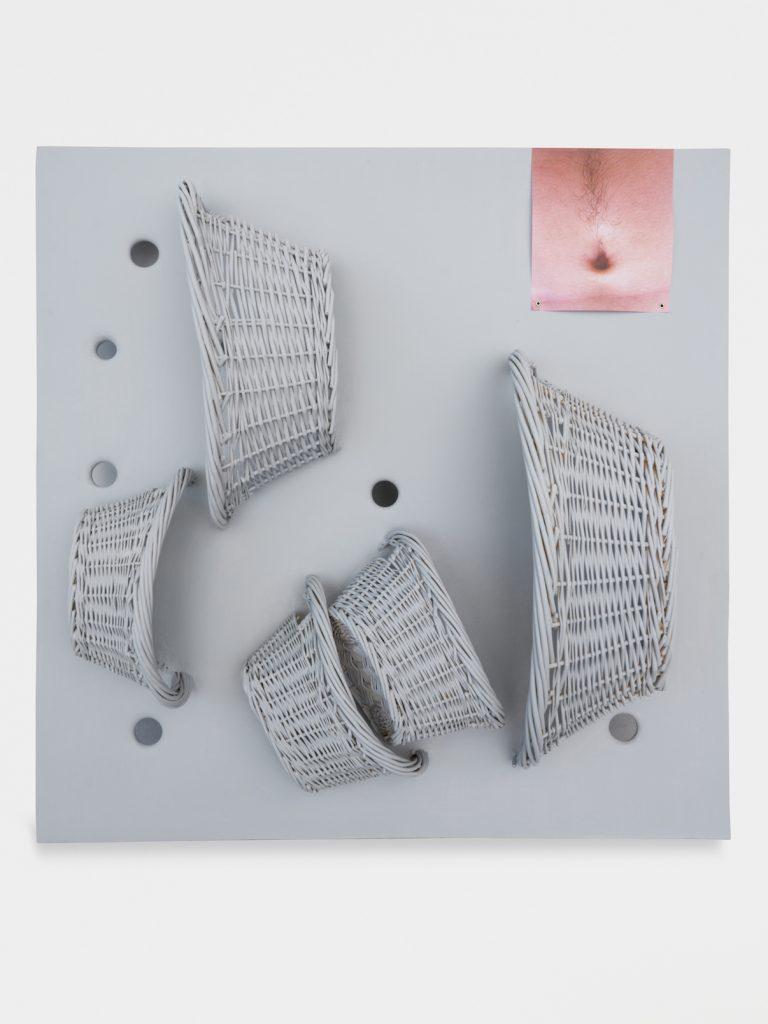 In his sculpture titled Innie or outie Interruption (2022), an intimate close-up image of a man’s belly is tacked to the top right hand corner of a gray paper-pulp canvas shaped sculpture dotted with holes and scattered with wicker baskets. Barger’s work began as an inherently personal exploration of his personal desire, but he has broadened his exploration to include outside narratives. Barger took photos of his friend’s belly buttons, as well as his own, before finding the perfect image of a stranger’s stomach online. After sharing stories with other Midwesterners in New York, many of them also queer artists, Barger realized he was not alone in his experience.

Barger grew up in Illinois and studied architecture before he took a year off to find himself. He worked as a dog walker, collecting discarded furniture and scraps along the way. Soon Barger was creating pulp out of the paper he found and building it onto the salvaged furniture before filing it down into shapes, a process he still uses today to create the unique, curved bodies of his sculptures. Barger’s view of furniture as a metaphor crystalized during the five years he worked as an assistant to the artist Jessi Reaves, a mentor and kindred spirit who uses functional elements as materials for her own boundary-pushing sculptures. 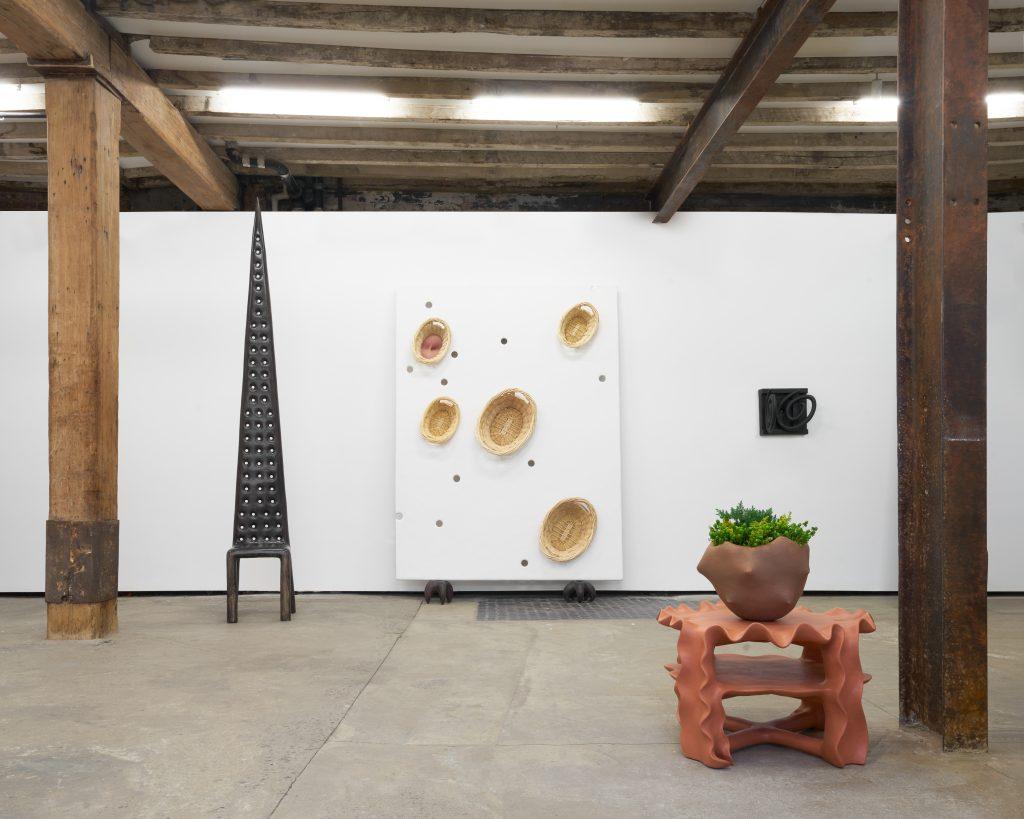 Barger is part of an exciting new generation of artists and designers pushing past the decorative aspect of design and developing a new standard where the work should mean something, a concept that has largely been more rigidly applied to fine art. The wall works at Salon 94 are just the beginning: Barger plans to explore these ideas more in the future.

‘A Face Is Not Just a Face’: Is It Finally Time for the Gay Gaze of Unsung Portraitist Gilbert Lewis?