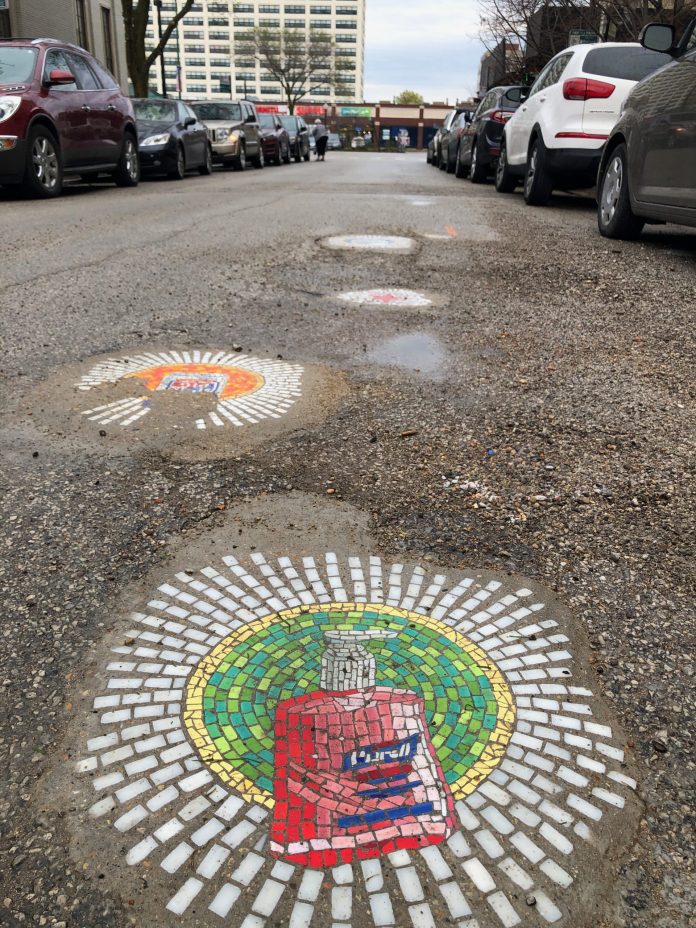 One Chicago driver got a little too excited about Jim Bachor’s recent tribute to one of humanity’s preferred coping mechanisms. In a COVD-19 themed series, the Chicago-based artist installed four mosaic potholes on the city’s northeast side, except an anxious motorist drove over the can of Old Style before it was dry. Despite its partial damage, the rest of the cemented works feature the newly iconic roll of toilet paper and bottle of hand sanitizer. A red star from Chicago’s flag fills the fourth as a nod to the local community.

Bachor tells Colossal that since he began his public projects in 2013, he’s realized that the blacktop holes are quite unifying. “Everyone hates potholes—rich, poor, young, old, tall, young. (It) doesn’t matter.” Despite his proactive measures to fix the clunky holes in cities like New York, Detroit, and Los Angeles, Bachor calls them an “unsolvable problem…. I actually have empathy for (the) city government. It’s a no-win situation. Folks assume my work is a bit of a political statement about getting on the city to fix them but it really isn’t.” This is Bachor’s first installation completed on a single street.

The tiled pieces currently make up a small portion of the artist’s overall creative work, although he has plans for additional series and appreciates that their accessibility. “The pothole art campaign also keeps me connected with people that like my work but might not be able to afford an original or print. And like a billboard, they work 24/7,” he says. Bachor also notes that there’s a connection between affluent neighborhoods and well-kept roads. “I’ve had funny concepts for nicer parts of the city but found it impossible to find potholes to do them,” the artist writes.

You can find more of Bachor’s civically-minded work on Instagram, and check out the prints and wearables available in his shop. You might also like these humorous “Coronavirus Tourism” posters and a game of Pandemic Lotería. (via Block Club Chicago)