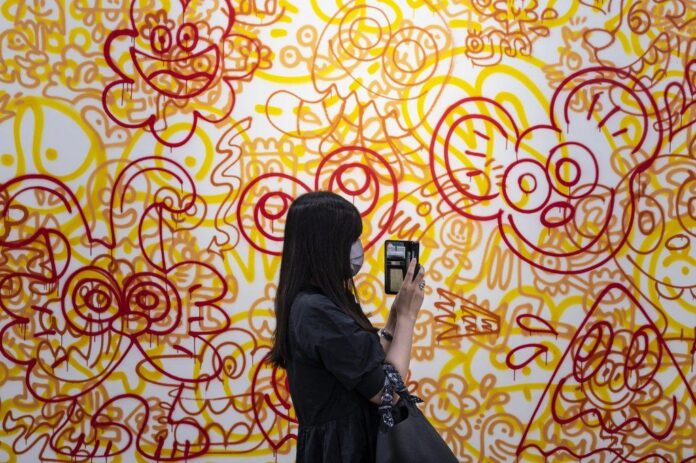 They are young. They grew up in an era of modern China that has undergone the most transformative change due to rapid economic expansion, while receiving education in the west. And now, their art careers are about to take off.

Unlike the preceding generation of Chinese avant-garde artists, who were brought up during the upheaval of the Cultural Revolution and remained largely unknown to the outside world until much later in their careers, younger Chinese artists are now getting the spotlight straight out of art school. An increasing number of them are getting attention from western galleries and gaining global exposure, appearing in group shows, art fair booths, and even solo presentations in Europe and the U.S.

Auction results might offer a glimpse into the market potential of these post-’90s Chinese artists. While total sales of Chinese contemporary art in the auction market has been relatively stagnant since the peak between 2011 and 2014, according to data retrieved from Artnet’s Price Database, overall sales began to pick up again in 2021, when Chinese contemporary artists raked in $538 million, a 45.4 percent uptick on the $370 million achieved in the pandemic year of 2020, itself up 5 percent on 2019. Sales of works by artists born between 1990 and 1999 saw the biggest growth compared to artists born in the previous eras, reaching more than $2 million in 2021, more than three times the $636,571 total achieved in 2020, and some 17.5 times more than the $114,240 the cohort achieved in 2019.

These young, western-educated Chinese artists have a specific appeal in Europe and America that sets them apart from their western counterparts, and this is not just down to their artistic skill, according to Thomas Stauffer, art advisor and co-founder of Gerber & Stauffer Fine Arts, Zurich, who has been working with these young artists and western galleries.

“In the context of the global world with its complex interconnections and interdependencies, this East-West dialogue of these young Chinese artists, which Western artists often lack, is attractive to collectors, gallery owners, and curators,” Stauffer told Artnet News.

Here are five post-’90s Chinese artists worth paying attention to, and they all happen to be women. 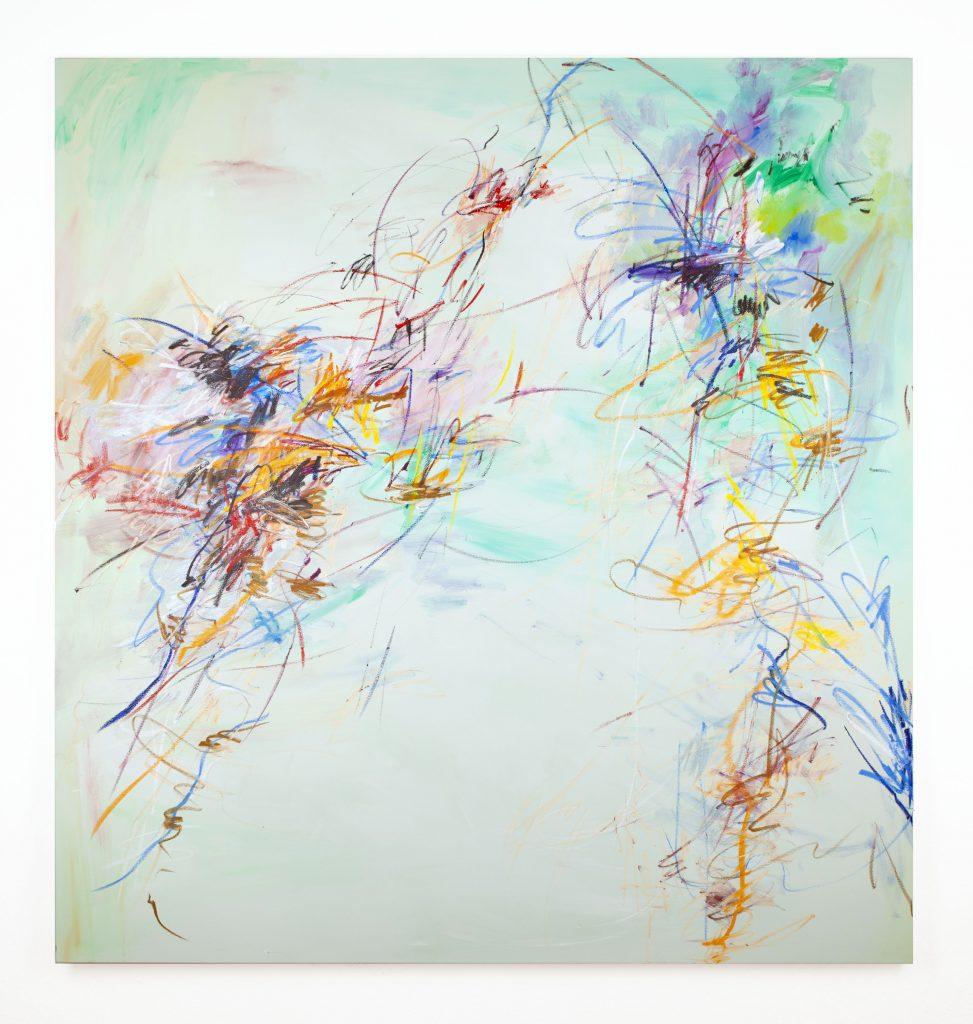 Xiyao Wang, Those whispers are scattered in the air with the wind no.1 (2021). © Photographer: Tizian Baldinger / Courtesy of the artist and Perrotin.

Who: Born in Chongqing, the 30-year-old attended the Sichuan Fine Art Institute in her hometown before furthering her studies in the west. She went to Germany to study at the University of Fine Arts of Hamburg between 2015 and 2018 before pursuing an MFA at the State University of New York at Purchase. Then she returned to Hamburg in 2018 and graduated in 2020 with an MFA. She currently lives and works in Berlin. She has recently been featured in a solo show, “The Crystalline Moon Palace” at Perrotin in Paris, and earlier a group show at Massimo de Carlo.

Why she appeals: “There is an energy and dynamism in Xiyao Wang’s paintings that is infectious and exudes an unforced and spontaneous spirit. She masterfully combines elements of Far Eastern calligraphy and the American Abstract Expressionists (Cy Twombly, Mitchell de Kooning). This skillful art-historical bridging distinguishes Xiyao Wang and other young emerging Chinese artists fresh MFA graduates,” said Thomas Stauffer, art advisor and co-founder of Gerber & Stauffer Fine Arts, Zurich. 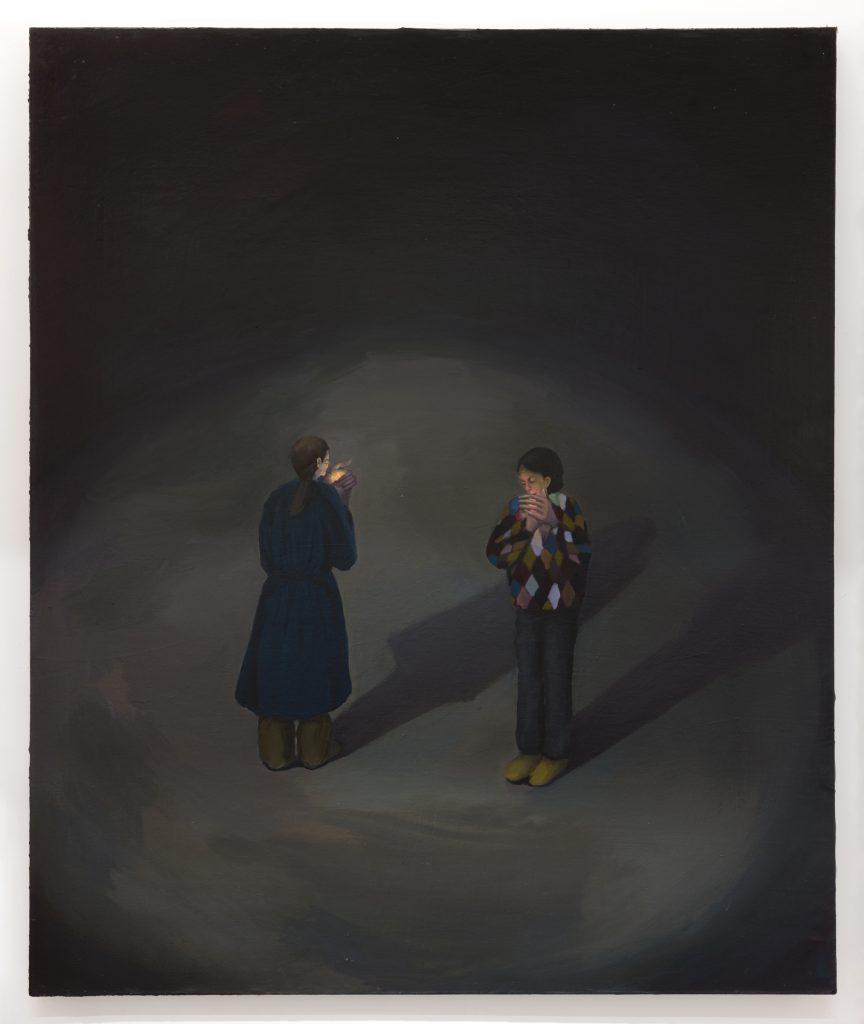 Who: The New York-based Liu was born in Beijing and has received training in various places in the west. She received her BFA from the School of Visual Arts, New York, in 2016, and studied for three years at the École Nationale Supérieure des Beaux-Arts, Paris. This year she received an MFA from the School of the Arts, Columbia University, New York. She has just opened her first solo exhibition, “Dogville,” at Kasmin in New York.

What she makes: She works in printmaking, independent publications, and figurative painting that appears to be layered with stories. The subtle yet dramatic combination of mysterious human figures and occasionally animals, and still objects conveys an emotive response to a distorted, repressive reality observed from afar. The alienation the artist has experienced from traveling between cultures has also influenced her work.

Why she appeals: “While Lyn’s exhibition history may be in its early days, she has developed a distinctly sophisticated and thoughtful visual vocabulary that is the result of a decade of study and refinement. Her technical prowess as a painter is equally mature, and we envision a very long career ahead of her,” said Eric Gleason, senior director at Kasmin Gallery.

Up Next: Kasmin will be showing Liu’s new works at the upcoming Armory Show in New York in September. 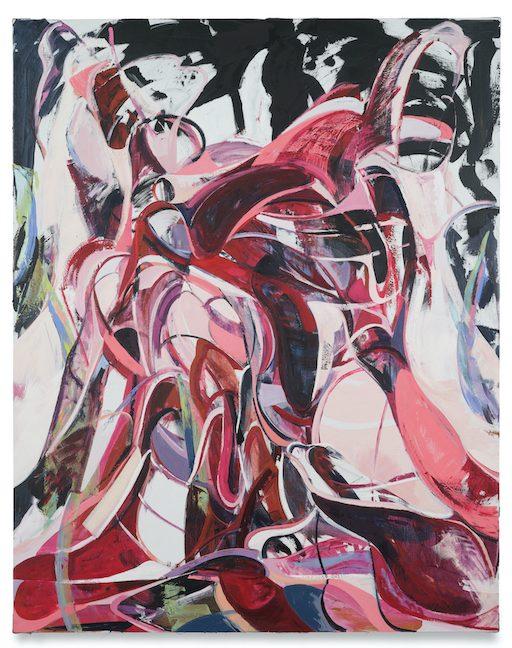 Who: Born in Beijing, the 29-year-old is the daughter of notable Chinese artist Zhang Gong, a pioneer of hand-drawn animation in China. She attended the Maryland Institute College of Art and studied painting at the Art Institute of Chicago before returning to China upon graduation in 2015. Her work has appeared in gallery shows including White Space, Star Gallery, and Ying Space in Beijing, as well as Salon 94 in New York. Her work is in the collections of Long Museum and the Longlati Foundation in Shanghai.

What she makes: Large-scale paintings that feature abstract interpretations of flora and fauna that can be read as eerie, enigmatic renditions of animal (or human) flesh, as seen in her and series, which pay homage to Francis Bacon’s (1954) that Zhang saw while she was studying at the Art Institute of Chicago.

Why she appeals: “Zhang Zipiao’s distinct hand, with her ribbons of juicy bold color, combined with strong physicality and unrest, place her as a central painter of her generation,” said Jeanne Greenberg Rohatyn, co-founder of LGDR.

Price range: LGDR declined to reveal the price range on the primary market, but a work sold at Phillips Hong Kong for $72,231 this past June.

Up Next: An upcoming solo show at the Long Museum, Shanghai; group shows at Song Art Museum and the Nanchizi Art Museum in Beijing; LGDR’s booths at Frieze Seoul and Art Basel Miami Beach, and a solo show at LGDR in New York in 2023. 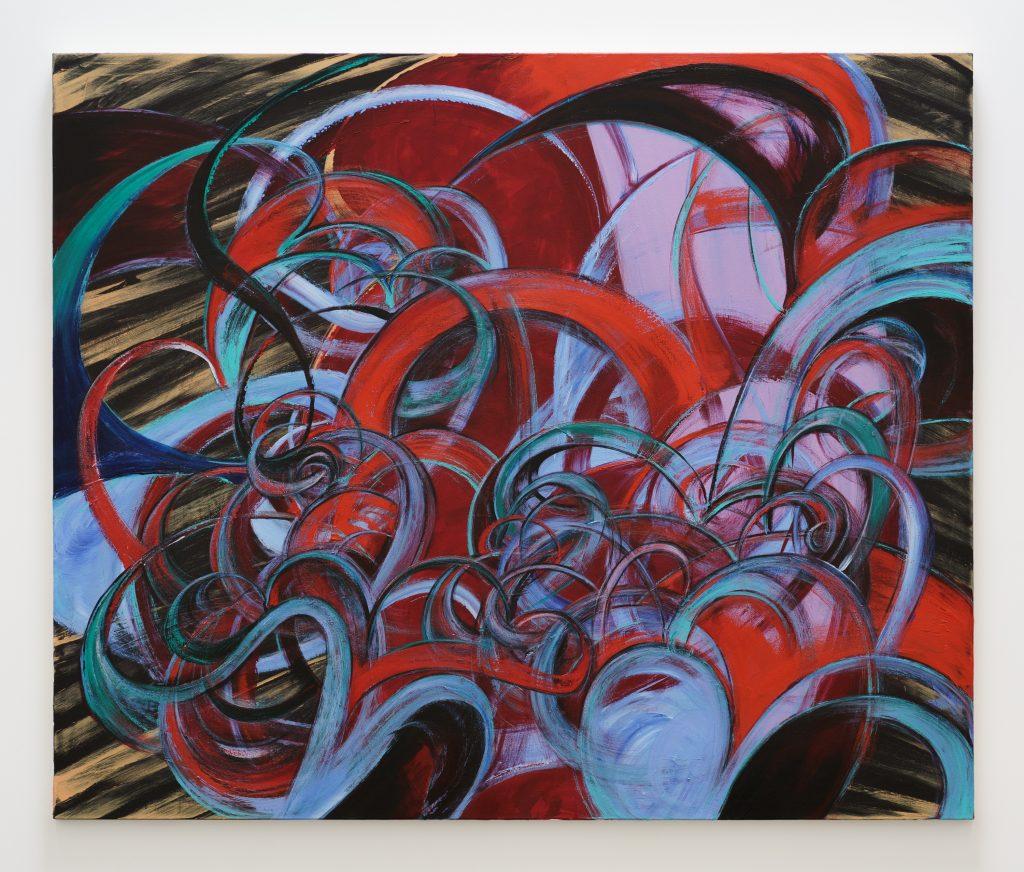 Who: The Shenzhen-born artist lives and works in New York City, where she first attended the School of Visual Arts for a BFA in visual and critical studies, followed by an MFA from the same institution. She has appeared in group shows in New York and Beijing, as well as solo shows at Latitude Gallery in 2020, and this year at ATM Gallery in New York. Most recently, she had her West Coast debut in a solo show titled “Expanse” at Bill Brady Gallery in Los Angeles. Her work is in the collection of some private museums in China, including He Art Museum in Foshan, X Museum in Beijing, and Xiao Museum of Contemporary Art in Shandong.

What she makes: Abstract paintings characterized by colorful brushstrokes that are distilled from her evolving, transient life experience, from growing up in Shenzhen, one of China’s fastest growing modern cosmopolitans, to establishing an artistic career in New York. The swirling motion depicted on canvas explores the vulnerability of life and bodies immersed in constantly changing surroundings.

Why she appeals: “I’m curious. First meeting Yuan, I knew immediately she shared my curiosity for painting. This curiosity and her dedication to painting made her an easy choice. The paintings also spoke to me. I’m not surprised by the interest in Yuan and her paintings. She’s a painter who puts in the time and knows what she wants, while having a serendipitous approach. My kind of artist,” said Bill Brady.

Up Next: A solo exhibition with Bill Brady Miami in March 2023. 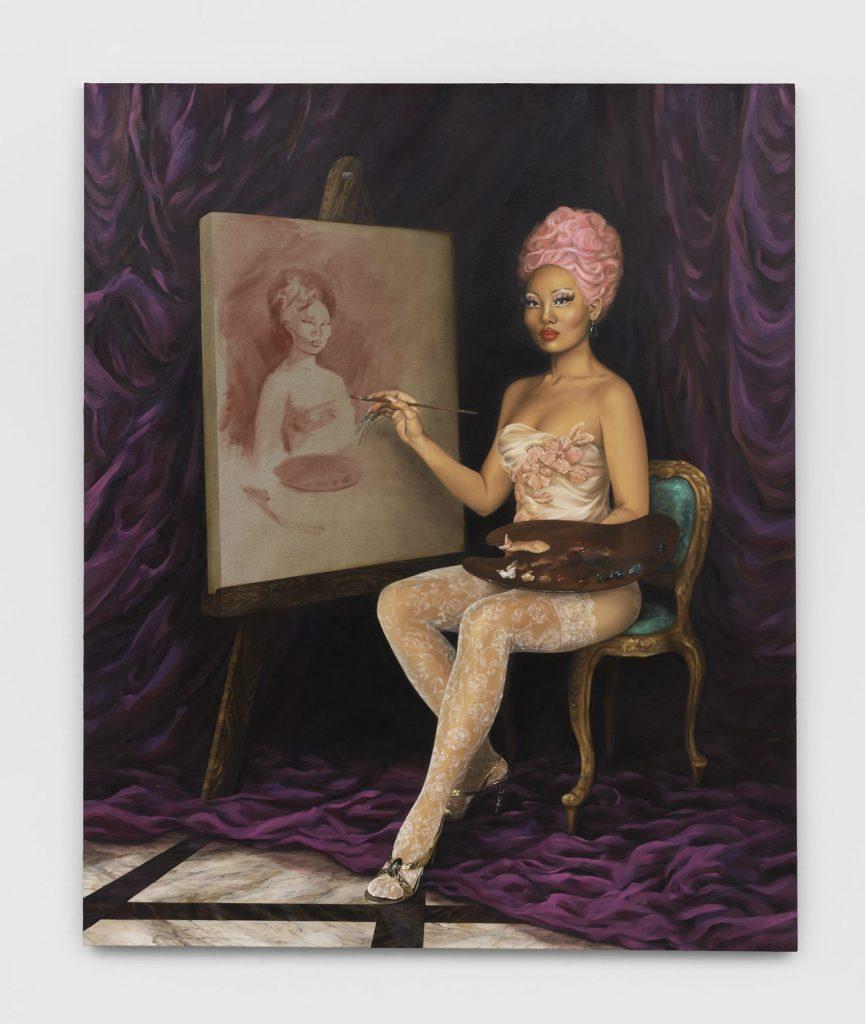 Who: Based in London, Xu was born in Shandong and has been drawing and painting since a young age. She began her study at the University of the Arts London’s Wimbledon College of Arts in 2014 majoring in fine art painting, and then earned an MA in painting from the Royal College of Art in 2020. Her work has appeared in gallery group shows including the most recent “Machines of Desire” at Simon Lee gallery in London.

What she makes: As a multi-disciplinary artist and an Asian female with a queer identity living in London, Xu’s work, whether it is painting, performance, or photography, investigates social constructs and the complexity of femininity, particularly in the digital age, where the line between what’s new and what’s fake becomes increasingly blurry. Her work also draws references from the 17th and 18th century western art history and motifs from queer culture.

Why she appeals: “Yang’s contribution to our curated exhibition, ‘Machines of Desire,’ is a powerful example of how she addresses notions of gender, sexuality, voyeurism, identity, and authority in her paintings. By traversing historical and contemporary visual cultures—in this painting, citing tropes from the Ming Dynasty, to Baroque and Rococo, through to cosplay—Yang’s work offers a portal to a timeless place, and in doing so, allows space for new truths to become possible,” Kat Sapera, director, Simon Lee Gallery.

Up Next: Xu will be featured in a group show titled “New Romantics” presented by Phillips in collaboration of The Artist Room at Lee Eugean Gallery in Seoul coinciding with the Frieze Seoul and Kiaf art week. She will also be taking part in the Vannucci Artist Residency (Umbria, Italy) with the Deighton Foundation in fall this year.