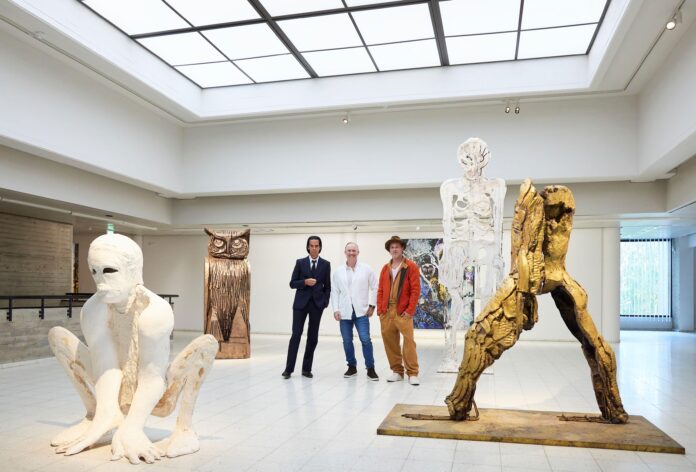 Many have described his face as “sculpted by the gods”, but few would define the actor Brad Pitt as a sculptor, until now. The A-list Hollywood star has publicly debuted his first works of art at the Sara Hildén Art Museum in Tampere, Finland, alongside works by the musician Nick Cave and the artist Thomas Houseago for the exhibition We (until 15 January).

Among the nine works by Pitt on show are a house-shaped structure moulded in clear silicon and shot with bullets, and his first ever sculpture, House A Go Go (2017): a 46cm-tall miniature house made out of tree bark, crudely held together with tape.

The largest pieces include a coffin-sized bronze box depicting hands, feet and faces attempting to break through the structure at various angles, and the plaster wall-hanging sculpture Aiming At You I Saw Me But It Was Too Late This Time (2020), which depicts a gun fight between eight figures.

The Oceans 11 star reportedly began making ceramic art following his turbulent divorce from the actress Angelina Jolie in 2017. According to The Sun, the actor now has a sculpture studio at his Los Angeles home, and invited Leonardo DiCaprio over during the making of Once Upon A Time In Hollywood to “bond over their shared love of pottery”.

Speaking at the exhibition’s opening, Pitt said of his artistic turn: “For me it’s about self reflection… It was born out of ownership over what I call a ‘radical inventory of the self’. And getting really brutally honest with me and taking account of those I may have hurt and the moments I’ve just gotten wrong.”

Meanwhile, the Australian singer-songwriter Nick Cave (not to be confused with the American visual and performance artist of the same name) is also making his artistic debut: he shows “glazed ceramic figurines depicting the life of the Devil in 17 stations, from innocence through experience into confrontation of our mortality,” according to a press release. The Devil: A Life is Cave’s first major body of visual work. It includes 17 individual pieces ranging between 15cm and 50cm tall, each hand-crafted, painted and glazed by Cave in England, between 2020 and 2022. Aesthetically the series nods to the artist’s interest in Victorian Staffordshire Flatback figurines, of which he is a collector.

Both fledgling sculptors created these works in dialogue with the considerably more experienced Houseago. The British artist has been practising for nearly three decades and showed work at the Whitney Biennial in 2010. In Tampere, Houseago, who is better known as a sculptor, shows a number of paintings, a medium he began experimenting with in recent years. They come from his large-scale Visions series that was made outdoors and was inspired by European symbolists including Norway’s Edvard Munch. He also shows new sculptures made from redwood and plaster that he made in response to works in the collection of the Sara Hildén Foundation, such as Alberto Giacometti’s sculpture Woman on a Chariot (1943/62).

Speaking of his decision to stage a collaborative show between himself, Cave and Pitt, Houseago says in a statement: “I am not an I. I’m a WE!”.

Philip Pearlstein, a Figurative Master Who Preferred Nude Portraits Over New Modes of Abstraction, Has Died at 98