Home News Will the Fourth Plinth in London’s Trafalgar Square be reserved for a... 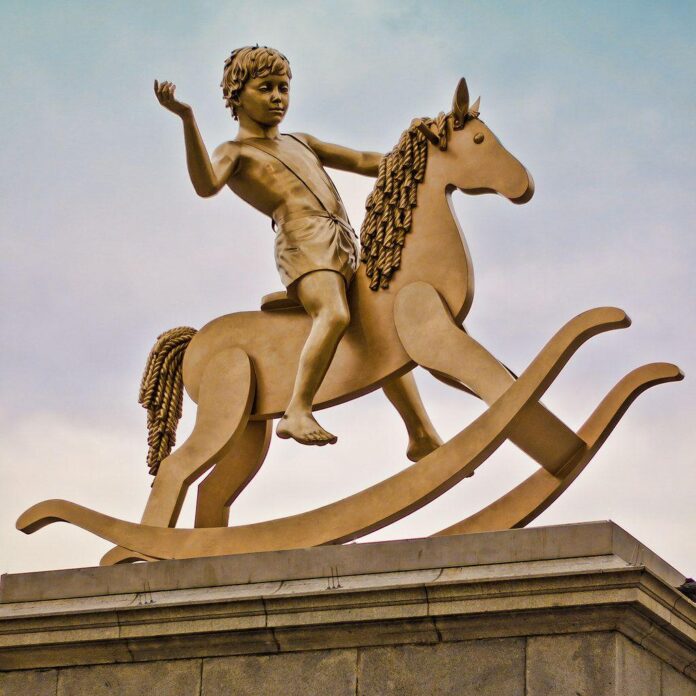 A memorial to Queen Elizabeth II could stand on the Fourth Plinth in London’s Trafalgar Square, the platform that has become the city’s most prominent space for contemporary art.

According to the Times, following the funeral of the late monarch 19 September, government officials will begin discussing ways to mark the Queen’s life and legacy with the Fourth Plinth seen as a possible location for a statue. Politicians have indicated that the space is being held for a commemorative statue of the Queen. Ken Livingstone, the former mayor of London, said in 2013: “The understanding is that the Fourth Plinth is being reserved for Queen Elizabeth II.”

But Michael Elmgreen, part of the Scandinavian artist duo Elmgreen & Dragset, criticised the idea, telling The Art Newspaper: “Through many of the amazing artistic contributions over the years I think the Fourth Plinth has become The People’s Plinth and [is] no longer a suitable site for celebrating members of the royal family.” Elmgreen & Dragset unveiled their commission—a boy on a rocking horse—on the Fourth Plinth in 2012 (Powerless Structures Fig 101).

Elmgreen adds “It would also be a devaluation of Queen Elizabeth’s popularity to place a statue of her next to the very unpopular King George lV [on the north-east corner plinth]. And can you imagine her on a plinth that has already hosted sculptures depicting an ice cream and drone [Heather Phillipson, THE END (2020)], a huge cartoon thumb [David Shrigley, Really Good (2016)], a blue cock [Katharina Fritsch, Hahn/Cock (2013)] and a boy on a rocking horse? There must be a better location.”

The Fourth Plinth programme was initiated in 1998 by the RSA (the Royal Society for arts, manufactures and commerce) with the support of the Cass Sculpture Foundation. Thirteen artists, including Yinka Shonibare, Rachel Whiteread and Mark Wallinger, have shown works on the plinth since the contemporary art initiative was launched in 1999.

For his 2018 piece,The Invisible Enemy Should Not Exist, the Iraqi-American artist Michael Rakowitz recreated an Assyrian winged bull with a human head, known as an lamassu. The work was based on the sculpture created in the ancient Mesopotamian city of Nineveh in 700BC, which was destroyed by Islamic State in 2015. But the pieces have not been to everyone’s taste. The rightwing commentator Darren Grimes tweeted: “Who thinks Trafalgar Square’s Fourth Plinth ought to be done with the crap modern art and instead be adorned with a permanent monument to her late Majesty?”

Speaking to The Art Newspaper, Clare Lilley, the director of Yorkshire Sculpture Park, says: “The Fourth Plinth is a brilliant and innovative platform for contemporary art and for debate around many important issues, not least post-colonialism, and to take that away would be a great shame as well as depleting London’s reputation as a forward-thinking city. But also the plinth itself is not well suited to properly honour such an exceptional monarch; it is off-centre, it sits very awkwardly in front of the National Gallery terrace, is adjacent to a flight of steps and is in close proximity to busy public toilets.”

She adds: “I expect that those who ultimately organise the memorial will want a place where the public can gather and pay tribute for years to come but I feel that a parkland setting is both more in keeping with the way our Queen enjoyed her private life and it would be a more peaceful and generous place for people to come together, remember and honour her. I’d have thought Kensington Gardens, with its proximity to Buckingham Palace and Kensington Palace as well as its history of royal memorials, would be more appropriate and far preferable.”

A spokesperson for the Greater London Authority (GLA), which is responsible for the fourth plinth at Trafalgar Square, says that a Queen Elizabeth II statue at a suitable location in London is a matter for His Majesty the King and the Royal Family to consider. “The GLA stands ready to support them in their wishes. There are planned Fourth Plinth exhibits for the next four years, and we will make an announcement regarding the new date for the next planned exhibit before the end of the month.”

The next artist to occupy the plinth is Samson Kambalu whose Antelope work is due to be unveiled later this year (the date is to be confirmed following the Queen’s funeral). Earlier this year Ben Luke, contributing editor at The Art Newspaper, reported that the piece “appears to be a relatively conventional bronze sculpture from one angle, but in fact depicts the pan-Africanist John Chilembwe’s defiant gesture of wearing a hat, which was forbidden in Nyasaland, modern-day Malawi, under colonial British rule. A smaller sculpture of the European missionary John Chorley [stands] alongside Chilembwe.”

In 2024, post-Kambalu, the Mexican artist Teresa Margolles will take over the plinth, showing 850 plaster masks depicting and made by trans people in London in a cubic structure inspired by form of a Tzompantli, a Mesoamerican skull rack used to display war captives.