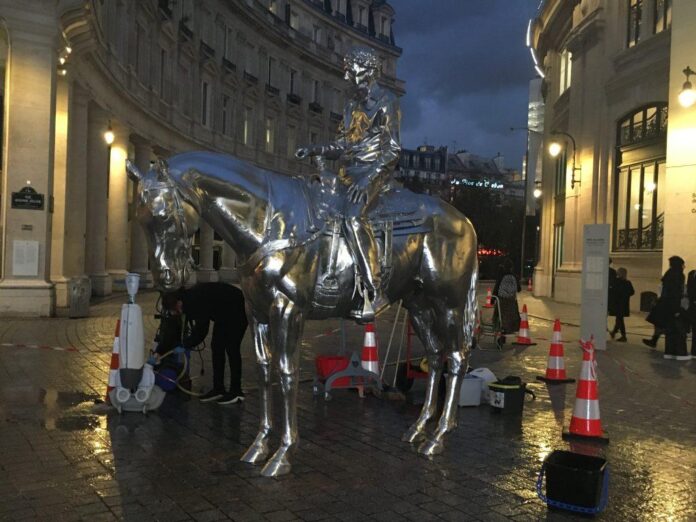 A silver equestrian sculpture by the American artist Charles Ray, installed in front of the Bourse de Commerce – Pinault Collection, was attacked by climate activists on Friday in central Paris.

The activists, Rachel, 20, and Aruanu, 26, also put a white t-shirt emblazoned with the phrase “We have 858 days left” on the sculpture’s torso—apparently a reference to studies stating that carbon emissions must peak by 2025 if the planet has a viable future. Then they knelt down in front of the artwork, holding hands, with a bucket of paint at their side.

“Eco-vandalism goes up a notch: an unprotected sculpture by Charles Ray was sprayed with paint in Paris,” Abdul-Malak posted on Twitter. “Thank you to the restorers who intervened quickly. Art and ecology are not mutually exclusive. On the contrary, they are common causes!”

By the time Artnet News arrived on the scene at 5:45 p.m., the paint had been completely removed from the sculpture and the ground after a two-and-a-half hour clean-up effort.

The Bourse de Commerce – Pinault Collection declined to comment when asked if it would be filing a police complaint.

Dernière Renovation has organized several actions in France over the past few months, from creating blockades on motorways to disrupting football and tennis matches. The latest demonstration coincides with the final day of the U.N. Climate Change conference, Cop27, in Sharm el-Sheikh, Egypt.

The Paris activists belongs to the umbrella group A22Network, which is affiliated with Just Stop Oil, whose activists threw tomato soup over Vincent van Gogh’s Sunflowers at London’s National Gallery in October.

Demonstrating just how international the eco-activists have become, just one week ago three women were arrested after attempting to glue themselves to Edvard Munch’s masterpiece The Scream at Oslo’s National Museum of Norway.

Museum directors worldwide have denounced the attacks. Earlier this month, directors from 92 international institutions signed a statement warning that the demonstrations were putting masterpieces at risk. (Conservators are divided on the subject.)

The statement, signed by leaders the Musée du Louvre in Paris, London’s National Gallery, Madrid’s Museo Nacional del Prado, and others, said: “The activists responsible for them severely underestimate the fragility of these irreplaceable objects, which must be preserved as part of our world cultural heritage. As museum directors entrusted with the care of these works, we have been deeply shaken by their risky endangerment.”