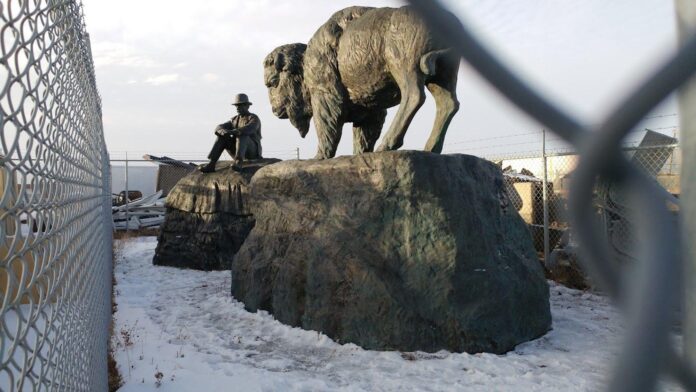 After commissioning a monument over a decade ago from artist Ken Lum comprised of two large bronze statues of a buffalo and a buffalo trader, the city of Edmonton, Alberta announced last week it was deaccessioning the work.

The work, finished in 2016 and based on a famous photograph from 1878 of a trader and a pile of buffalo hides shortly before the animal’s near extinction, was meant to bookend a new pedestrian bridge spanning the North Saskatchewan River that was completed in 2018. But after years of consultation and work the sculpture was deemed “harmful” by the city, which implied it might be perceived as a celebration of colonialism.

“While some audiences may find the artwork thought-provoking, for others it may cause harm and induce painful memories. For this reason, it is not considered inclusive to all Edmontonians,” the city said in a statement.

Lum, an internationally known Canadian artist who is currently the chair of the department of fine arts at the University of Pennsylvania’s school of design, says the decision was “authoritarian” and misguided.

According to the artist, city officials expressed “delight” with the work he completed it in 2016, but it has sat in municipal storage since. “It’s mind-bending to say I support colonialism,” he says. “I’m interested in the fact that colonialism didn’t end with decolonisation—there’s an aftermath that’s alive and well—not only in Canada but around the world.”

He adds, “It’s not a work that hammers you in the head, it’s a thoughtful, quiet work, but somehow the city is saying it’s verboten to even depict the buffalo fur trader. He’s a figure of malice, which I agree with—he’s still there in a different form, just look at the oil sands of Northern Alberta.” The work is not just about “culling the historical moment”, Lum says, but about how it relates to our own “anthropogenic moment” as more species become extinct every day in the midst of a global climate emergency.

Consultation with local First Nations groups was a mandatory part of the commission, which was awarded to Lum as part of a competition. He says the work is not only about Indigenous issues and the harm done to First Nations groups by the eradication of the buffalo, but addresses the ongoing rapacious extraction of natural resources.

There are many statues of buffalo across Canada, Lum says, but it seems to be the trader figure that provoked an outcry. As a counterpoint he mentions the 1910 Anglican church located in Fort Edmonton Park, which offers only a pleasant “settler” narrative with little context about indigenous peoples. The church he says is “a symbol of a kind of harm.”

Lum, who is part of Monument Lab, a US-based non-profit that studies how history is told in the public landscape—defining monuments as “a statement of power and presence in public” and intersecting with an active international movement to remove monuments and statues that reflect racist history—is not suggesting that the historical church be removed.

“Public art should be about asking questions,” he says.  “The closure of it in advance of someone who may object to it is authoritarian.”

He notes that it takes time for the public to engage with public art, and that his Monument to East Vancouver (2010)—now a beloved part of Vancouver’s cityscape—was initially vilified until it was eventually embraced as a civic icon. “Sadly the Edmonton work will never be given that chance.”

Amid a Feverish Market for Her Prismatic Paintings, Japanese Art Dynamo Etsu Egami Is Keeping a Cool Head