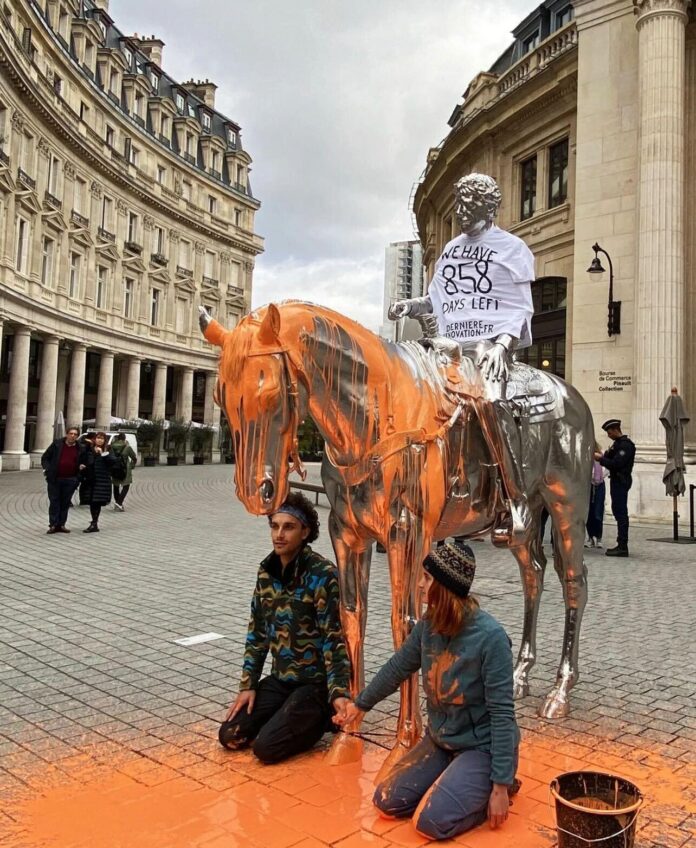 Eco activists have taken aim at a sculpture owned by one of France’s most prominent private collectors. On 18 November, protestors from the Dernière Rénovation group daubed a silver equestrian piece by the US artist Charles Ray (Horse and Rider, 2014) with orange paint; the work stands outside the Bourse de Commerce-Pinault Collection in Paris founded by the French luxury goods billionaire François Pinault.

In a clip posted on Instagram, one of the protestors is seen mounting the horse, placing a T-shirt on the horse rider which says: “We have 858 days left”, a reference to the three-year time limit for reducing CO2 emissions. The protestors then sat in front of the sculpture, holding hands (it is unclear if the protestors have been charged).

One of the demonstrators, Aruanu, says on the group’s Instagram feed: “What other choice do we have? I’m 26 and there’s almost no chance of me dying of old age. It must be said—government inaction is mass murder for my generation.”

The French culture minister, Rima Abdul Malak, visited the site, tweeting: “Eco-vandalism goes up a notch: an unprotected sculpture by Charles Ray was sprayed with paint in Paris. Thank you to the restorers who intervened quickly. Art and ecology are not mutually exclusive. On the contrary, they are common causes!” Her tweet prompted angry reactions, with one contributor saying “we are held hostage by your inaction”.

The protest in Paris follows a wave of climate protests at museums and galleries across Europe. Demands from similar groups such as Just Stop Oil in the United Kingdom and the Italian group Ultima Generazione have included an end to new oil and gas projects. Earlier this month two climate activists poured oil over a Gustav Klimt painting, Death and Life (1908-15) at the Leopold Museum in Vienna.