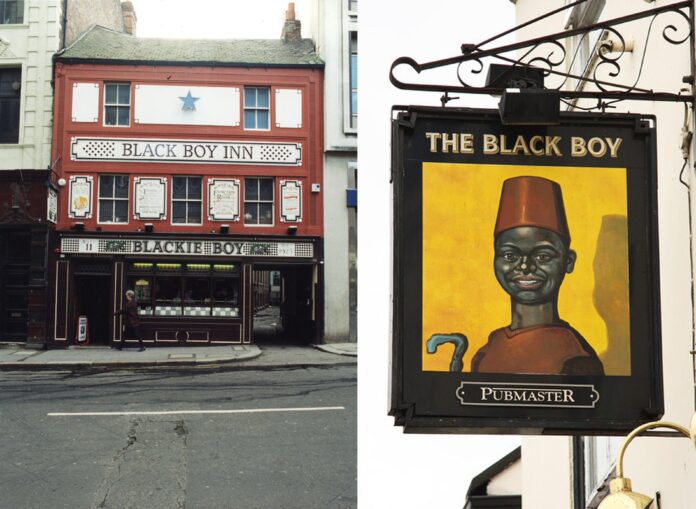 Ahead of the Turner Prize exhibition to be held this year at Tate Liverpool, one of the nominated artists—the Guyanese-born British artist and photographer Ingrid Pollard—is showing works in a career survey at Turner Contemporary in Margate, southeast England (Carbon Slowly Turning, until 25 September).

A key figure in the Black British art movement of the 1980s, and an active member of grassroots campaigns for women’s liberation and LGBTQ+ rights, Pollard has been making experimental work that explores themes such as race, sexuality and identity for more than 40 years. A particular body of work, Seventeen of Sixty Eight (2018), explores a difficult subject: representation of the Black figure in British life, namely the African figure on pub signs and architecture (the title relates to the 68 pubs in the UK that have “Black Boy” in their name).

The exhibition in Margate includes photographs, signs and found objects which “allow the viewer to encounter these representations of British history and the ‘Black Boy’ hidden in plain sight”, the gallery guide says. Pollard visited all of the venues, from rural inns to suburban lanes, that bear traces of a ‘Black boy’.

The exhibition curator Gilane Tawadros says in a catalogue text that “the spectre of the black boy, it seems, haunts every English town and village, and has taken material form in the mundane furniture and fittings of ordinary life. The legacy of slavery and the presence of Black people have been relegated to the margins, to incidental signs on drab buildings whose exact location remains obscure.” She highlights a series of white embossed prints that line the wall of the gallery, which show images of a boy and the words The Black Boy rendered in white.

The artist says in a statement: “The signs reveal evidence of a multiplicity of meanings within the frames that echo a British history of colonial commerce, popular culture, portraiture and narrative.” She explains how the project evolved, beginning at a pub in Killay, South Wales. “My interest [in Black Boy] pubs began on a visit to the Gower Peninsula. I remember they had really racist names for the cocktails.” She adds: “People ask why are you doing this? I’m more curious as an artist and researcher. When I go to these places, I’m just a pubgoer trying to have a conversation.”

A different version of the Ingrid Pollard exhibition opened earlier this year at MK Gallery in Milton Keynes. The other Turner prize nominees this year are Heather Phillipson, Sin Wai Kin and Veronica Ryan.