Home News Damien Hirst Just Burned Millions of Dollars Worth of His Art in... 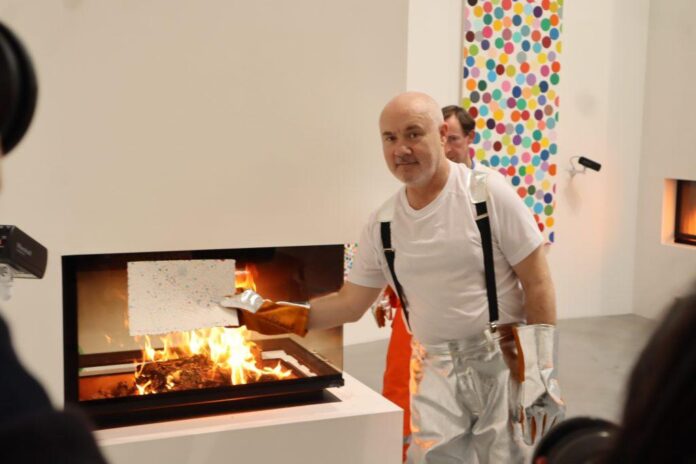 The white tents are up in Regent’s Park, and the art crowd has descended on London to burn money at Frieze. And if collectors followed their noses today, they just might have ended up at Damien Hirst’s Newport Street Gallery, south of the Thames, to watch the provocative artist toss potentially millions of dollars worth of art into the flames.

It was the grand finale of “The Currency,” Damien Hirst’s debut NFT project, where he invited collectors to make a $2,000 wager on the value of his art by choosing either a digital token or a physical work on paper.

“What a weird day!” the former YBA declared as he swaggered into the gallery, clad in a set of silver fireproof trousers. Workmanlike, he soon began to direct his studio assistants on how to most effectively chuck his artwork into five furnaces dotted around the room—after, of course, first holding up each work to the many cameras capturing the event.

“Going in!” Hirst declared, to applause from the room, as he tossed the first work, titled totally gonna sell you, onto the pyre. “Bye!”—there went another one. 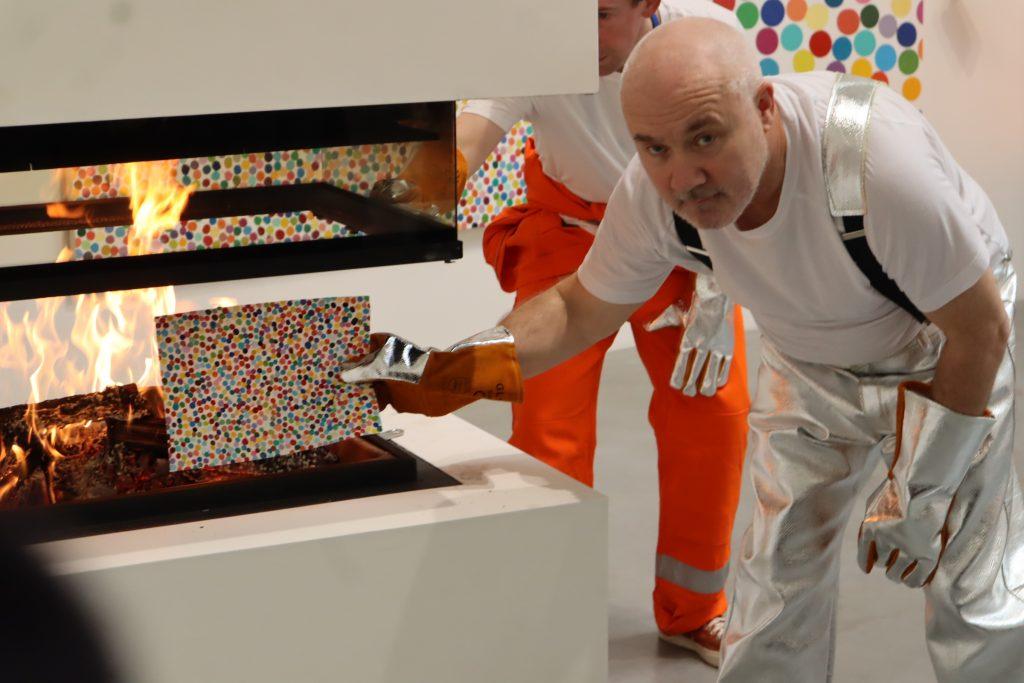 Damien Hirst at Newport Street Gallery for the grande finale of The Currency. Photo: Naomi Rea.

In case you’re wondering why Hirst is burning his art, let’s revisit the simple premise of the project. Last July, the artist dropped a collection of 10,000 NFTs, priced at $2,000 each; each corresponded to a real life work on paper. Hirst gave collectors a one-year window to enjoy their NFTs (or trade them in the Wild West that is the NFT market) and at the close of the exchange window, everyone left holding an NFT had to make a choice: Keep the digital token, or exchange it for the physical work. The twist? Whichever object the owner did not choose would get burned.

The final results came in in July, and—perhaps unsurprisingly as we have entered a crypto winter with NFT trading volume down 97 percent since January’s record high—the physical art won. A whopping 51.5 percent, or 5,149 “currency holders” chose to trade in their NFTs for physical works. That left 4,851 holders of NFTs, and thus 4,851 physical works to be consumed by the flames (though it should be noted that NFTs would have lost harder had Hirst not had a meaty thumb on the scale, as 1,000 of those NFTs belonged to him).

All 10,000 physical works went on display at the gallery, stacked in towers of transparent slides, for collectors to come and pick up their paintings. Once collected, these works are replaced by black-and-white translucent slides. The others are taken out one by one and upstairs to the furnace room. 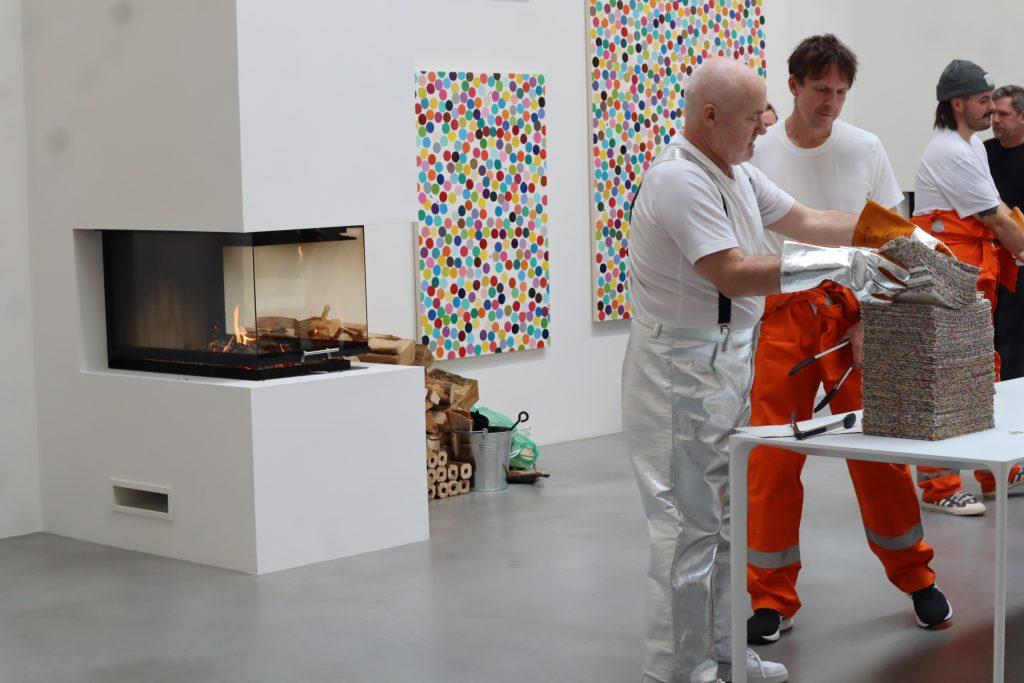 Damien Hirst at Newport Street Gallery for the grande finale of The Currency. Photo by Naomi Rea.

“It’s kind of nuts to be burning art, but I think it’s more like transformation really, because it’s the completion of making the proper artwork into an NFT,” Hirst said to a room of select press and 200 invited guests, many of whom were there to watch their would-be physical work burn.

“It’s a bit like the reverse of signing,” the artist joked as he funneled paper into the flames, earning a chuckle from those present who’ve heard tell of Hirst’s factory-like studio operation.

If you are wondering who made the best call in the situation, let’s look at the stats. Last week, resale prices of Hirst’s NFT hovered around $6,354, though the all-time average price is $20,742. Meanwhile, the highest price achieved at auction for one of the physical works has been $30,642 (at Sotheby’s in June), though most recently one sold for $13,723 at Bonhams. 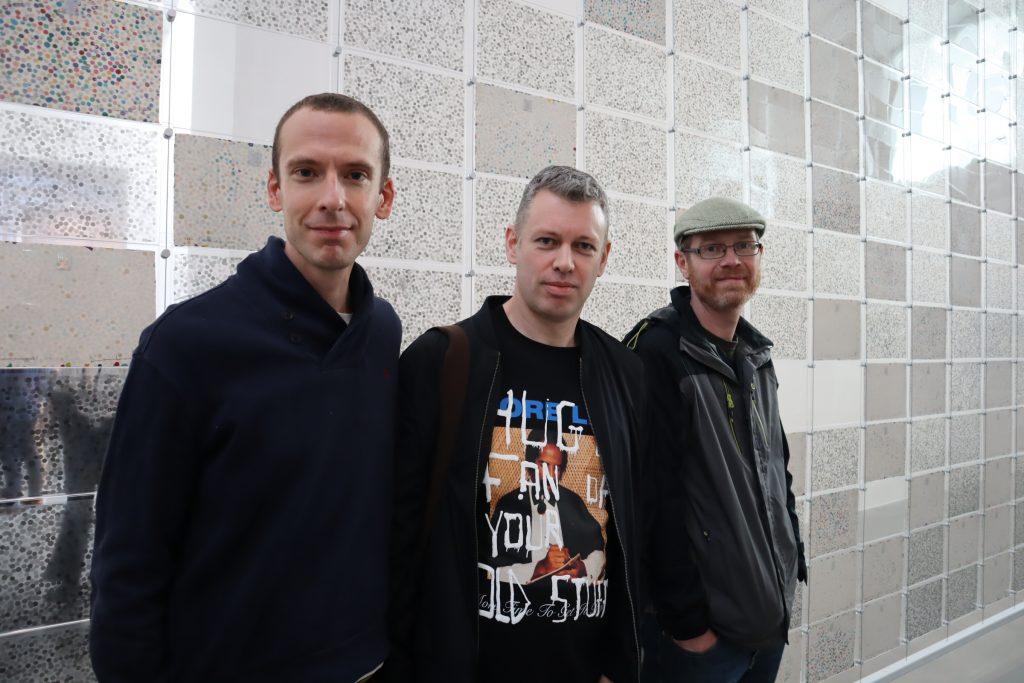 Among those in the room was art collector Tony Simmonds, who confessed that he’d bought into the project in order to get access to an original Damien Hirst work. “So why I’m here watching it burn, I’m not sure!” he laughed.

Luke Davies, another art collector who is active in the urban contemporary scene, gave some useful context that might help answer that question. “A lot of what isn’t really talked about is that the NFT isn’t just a jpeg,” he said, explaining that those who held onto their NFTs have been rewarded with some serious perks. These include access to Hirst via a studio visit.

Meanwhile HENI, the international art services business Hirst has collaborated with on the project, has also been showering them with gifts, such as a second Hirst NFT for free, and merch, such as a Hirst spot umbrella for Christmas. And a whole community of collectors has come together on Discord around the artist. “I see the NFT more as an access card to the Damien Hirst club,” Davies said.

But the most informative nugget was the revelation that collectors who held onto their NFTs were gifted with an original work on paper anyway, and are now holders of a Hirst spin painting. So in the end, it looks like there was a correct answer to the test. 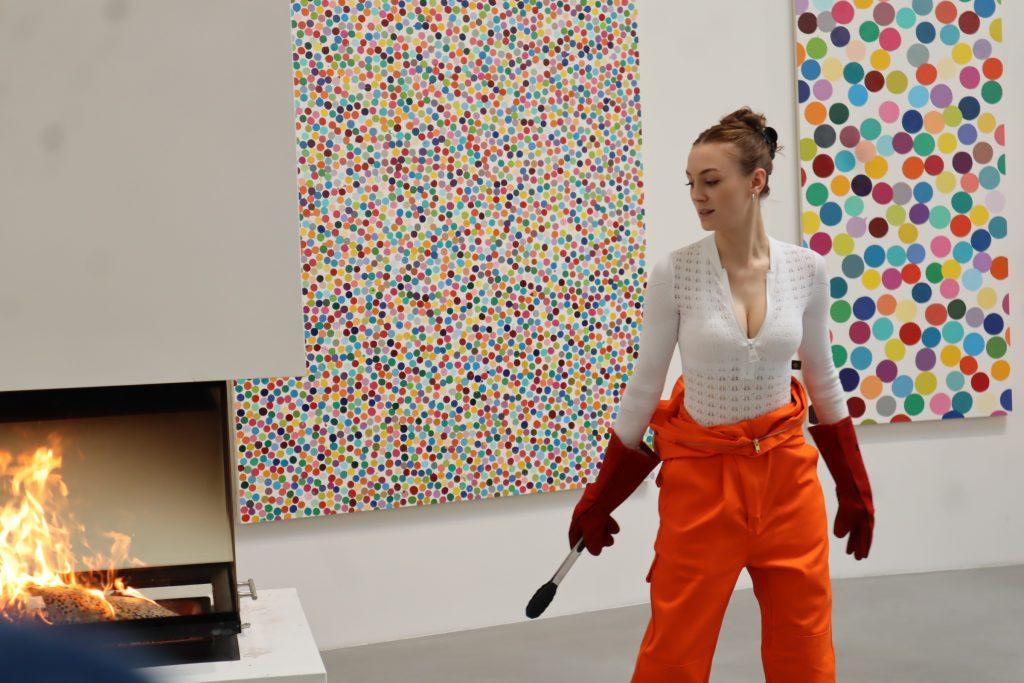 A studio assistant at Newport Street Gallery for the grande finale of Damien Hirst’s The Currency. Photo by Naomi Rea.

Some of the collectors present were less enthused with the spectacle than they had anticipated, such as Shaun Davin, a collector and long-time Damien Hirst fan, who has attended some of his more spectacular events such as his 2008 Sotheby’s auction Beautiful Inside My Head Forever and his phony Venetian shipwreck Treasures From the Wreck of the Unbelievable.

Davin had been one of the original currency holders, but had opted to trade on his NFT during the exchange window—though he told Artnet News he is seriously considering buying back into the club.

As I made my way out of the gallery, sweating—those furnaces are hot!—I had to laugh. Was it poignant that the country’s richest artist was in here burning art while we are in the midst of an energy crisis and much of the U.K. can’t afford to put their heating on this winter? Perhaps.

When asked what all this was about, Hirst turned the question back on his audience. “I’m saying, what’s it all about? That’s what I’m asking you,” Hirst said. “It’s all about finding out what happens next.”