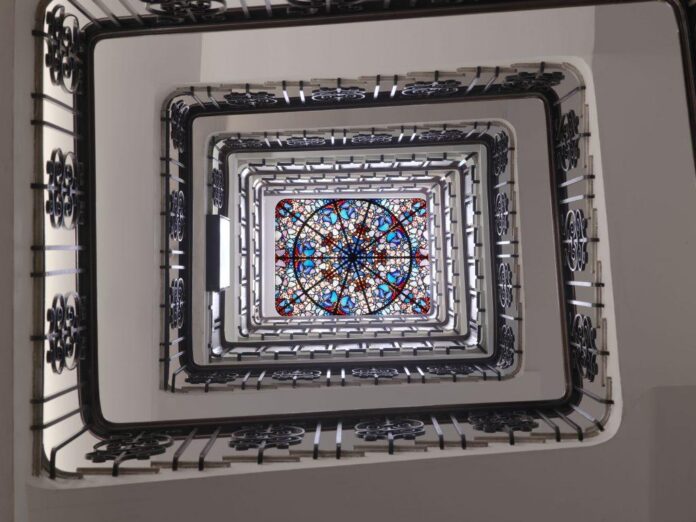 Ride the elevator, if you wish, but at Claridge’s in London, the smart set now takes the stairs. Hanging in the heavens at the top of the main staircase of that glamorous Mayfair hotel is a vividly colored kaleidoscope of butterflies. The work of British artist Damien Hirst, the stained-glass skylight featuring hundreds of butterflies is a new addition to the hotel and Hirst’s first foray in stained glass. 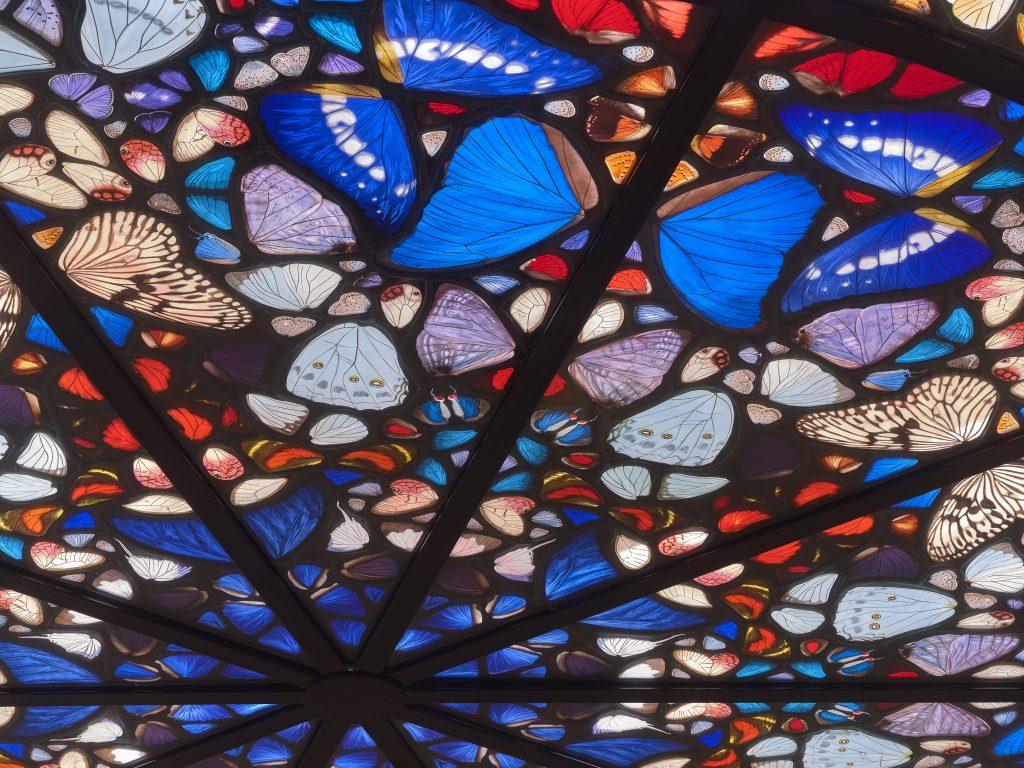 Close-up view of the artist’s stained-glass skylight. Courtesy of Claridge’s.

The rectangular window—which measures 6-by-8 feet and features a mass of cerulean, scarlet and lilac glass butterfly “wings”—is set into the ceiling of the 8th-floor staircase landing. Illuminated by LED lights, it draws guests up past the Royal Suite to the dormer balconies.

Butterflies and Hirst have a rich history, the winged insects appearing in early work in the 1980s, but most famously in his solo debut of 1991, . At that show, live butterflies emerged from pupae affixed to canvases. Viewers were invited to stand amid an ever-changing life cycle of birth, sex and death, as the butterflies—trapped in a Soho gallery room—lived out their short existence as an art installation.

At the same time, Hirst exhibited paintings that incorporated whole butterfly specimens, a technique he took up again in 2011 when he used real wings to create works reminiscent of stained-glass rose windows. At one point, his studio was said to be the UK’s biggest importer of exotic butterflies.

This being Hirst—he of rotting cows, pills, and a macabre obsession with skulls—the butterflies have proved controversial. His “dead things are very dead,” commented Frieze magazine of a 2012 Tate Modern retrospective that restaged the butterfly life cycle installation. “It doesn’t reveal an awful lot.”

By contrast, this new glass work is as joyous as an afternoon martini in Claridge’s Fumoir bar. “I love light and I love butterflies,” Hirst said. “I love how it’s turned out; I wanted to create an optimistic kaleidoscope of hope and light and butterflies and I think the result speaks for itself.”