Home News In a First for the U.K., a Public Museum Has Repatriated Its... 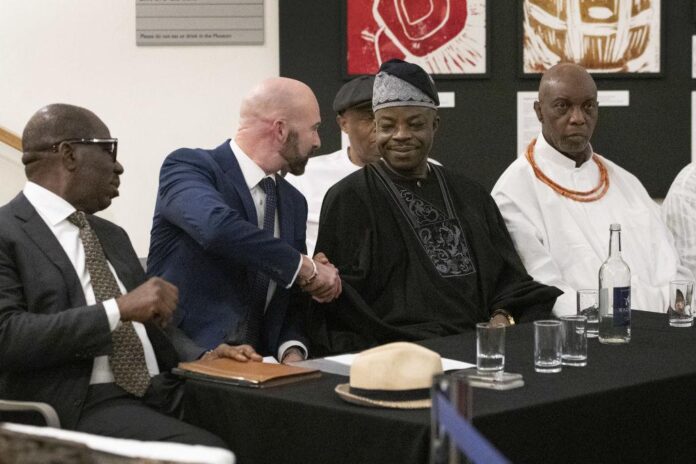 The Horniman Museum and Gardens in southeast London has restituted its collection of Benin bronzes to Nigeria, becoming the first public U.K. institution of note to do so.

At a ceremony held yesterday, November 28, the anthropological museum transferred ownership of 72 objects to officials from Nigeria’s National Commission for Museums and Monuments (NCMM). Each of the artifacts was looted by British soldiers in an infamous raid of Benin City (present-day Nigeria) in 1897.

Six items, including a pair of bronze plaques from Benin’s royal palace, will immediately return to Nigeria, while the remaining 68 pieces will remain on loan at the museum until a later date, per an agreement between the Horniman and the NCMM.

The Horniman’s Trustees voted in July to return the unethically-sourced objects, calling the move a “moral and appropriate” response to a formal request from the African country that came in January of this year.

“The decision of the Horniman trustees to return the objects looted from Benin City in 1897 culminates today in the signing over of ownership to Nigeria. However, it does not represent the end of the process,” said Michael Salter-Church, the chair of the institution’s trustees, in a statement. “We hope that actually, it marks the beginning of a long-term and mutually beneficial relationship between the Horniman and colleagues in Nigeria.”

The British Museum, in particular, owns 900 Benin objects—the largest collection of its kind in the world. However, it has repeatedly rejected calls for returning the items, citing the British Museum Act of 1963, which forbids the institution from disposing of its holdings. 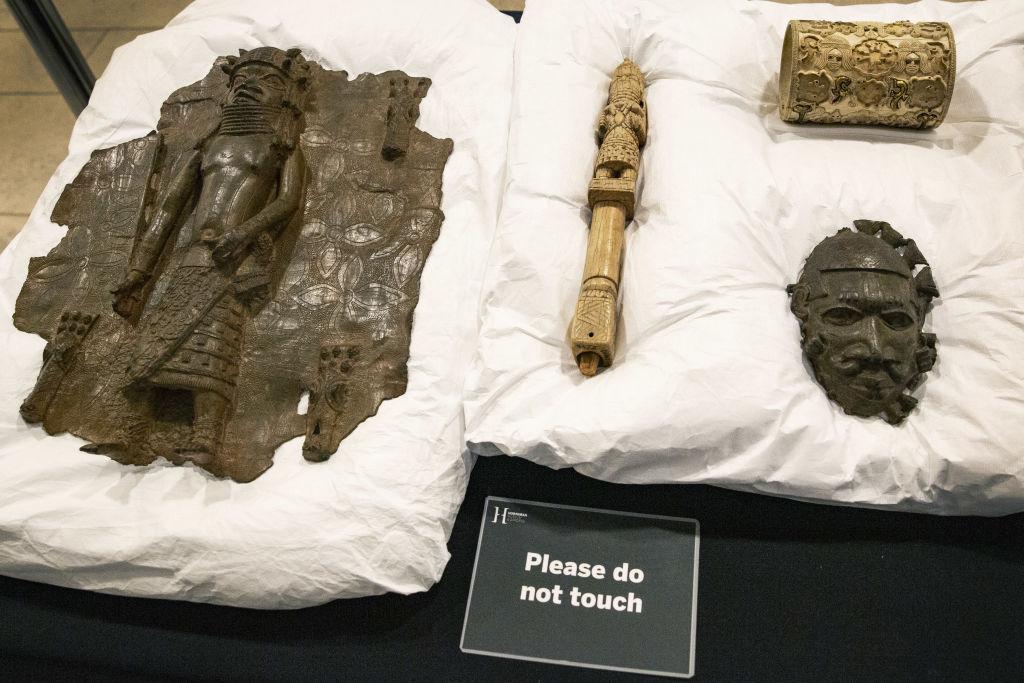 Benin artifacts from the Horniman Museum and Gardens on display at a ceremony on November 28, 2022. Photo: Joshua Bratt/PA Images via Getty Images.

“I think the British Museum is watching,” Tijani said at Monday’s event, according to the BBC. “I believe they are now taking it deeply to see that they do something, because every museum across the world is saying it is not right for them to hang on to these objects.”

The Horniman’s chief executive, Nick Merriman, told reporters at the ceremony that the museum trustees’ vote to return the Benin bronzes came after consulting with London’s Nigerian diaspora community and local schoolchildren.

“The overwhelming consensus was that the objects had been looted,” he said, per the Guardian. “They should be returned on the grounds that … they were acquired with force and under duress.”

The objects will likely end up at the Edo Museum of West African Art in Benin City, a new venue designed by British-Ghanaian architect David Adjaye to hold all returned Benin bronzes. It’s slated to open in 2026.

What I Buy and Why: London D.J.-Turned-Curator Henry Relph on Spotting the Latest Young Talent, and How He Shops the Fairs

Artist Ani Liu Has Some Radical Suggestions for What Pregnancy Could Look Like. It Begins With Artificial Wombs