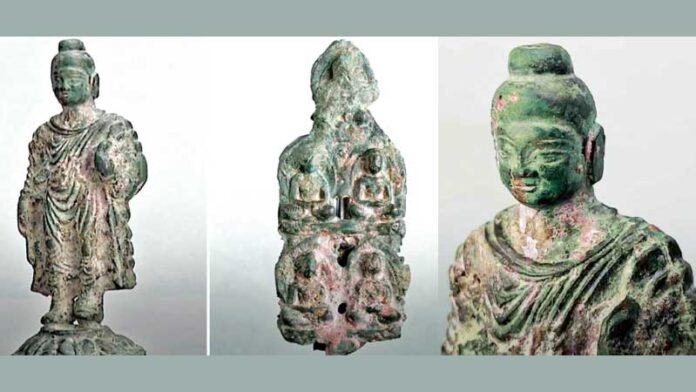 Two statues that archaeologists say are the oldest known gilded bronze Buddha statues found in China have been discovered in Shaanxi province. News about the statues appeared in Chinese state media last week.

According to the Xinhua news agency, the excavation was supervised by the Shaanxi Academy of Archaeology. Archaeologists have found objects in the village of Chengren, and they believe the statues date back to the Eastern Han Dynasty, which existed from 25 to 220 AD.Along with the Budha statues, archaeologists also found ancient pottery.

Both Budha statues are small enough to be held in the palm of your hand: one is just under six inches high, the other is about four inches. They were found in the tomb. Those involved in the dig, which is still ongoing, said the newly discovered Buddha statues could help historians understand when and how Buddhism arrived in southern China.

“The results show that Buddhism spread to China from South Asia along the ancient Silk Road during the heyday of this cultural exchange route, that is, the Han Dynasty,” a spokesman for the Shaanxi Academy of Archaeology told Deutsche Welle.

The finds come at a time when China is experiencing an archeology mania. Recent discoveries of artifacts such as two golden masks found in the Sanxingdui region have changed people’s understanding of Chinese history and sparked a growing interest in the distant past.

The South China Morning Post reports that authorities are interested in all that. Money is being poured into archaeological endeavors in the hope of developing tourism.

One of the statues is modeled after Shakyamuni Buddha, and the other is made of five Buddhas.

Strikingly, the Buddha statues seem to have been made by local Chinese craftsmen in the Gandharan style. Gandhara was a region of Central Asia that pioneered one of the earliest styles of Buddhist art. According to CGTN, this conclusion about their origin was based on preliminary results from performance modeling, analysis of the manufacturing process, and determination of the metal composition of the Buddhas.

This means that the Budha statues, already invaluable in their heritage, are of crucial research importance for the representation and Sinicization of Buddhist culture. “The results show that Buddhism spread to China from South Asia along the ancient Silk Road during the heyday of this cultural exchange route – that is, the Han Dynasty,” a spokesman for the Shaanxi Archaeological Academy told Deutsche Welle.

The Shaanxi Academy of Archaeology excavated 3,648 tombs and 16,000 sets of artifacts in Xianyang. Its teams work in the Hongduyuan Cemetery, which lies just north of Xi’an, once known as Chang’an, the capital of the Tang Dynasty (618-907).

The tombs and artifacts unearthed at Hongduyang span 2,200 years of history, from the Warring States period (475 BC–221 BC) to the Qing Dynasty (1644–1911). A large number of tombs at Hongduyang, the high quality of the items found at the site, and the long duration of the dynastic origin of these items are unparalleled in the country.

Li Ming, a researcher at the Shaanxi Archaeological Academy, said, “The owner of the tomb may have been a county official or landowner with a certain family influence and economic power,” Xinhua said. Most of those who are buried in the tombs turned out to be royal relatives, high-ranking officials, and dignitaries, all of whom are recorded in history books.

It is highly likely that these Buddha statues were part of the owner’s funerary and religious paraphernalia, indicating that he was familiar with the Buddhist religion and possibly its teachings. Buddha images formed part of the lay devotee’s collection, which, along with his large family tomb, boasted to the posterity of their wealth and status, fine taste, and spiritual piety.

Birthday Bash for Baselitz as He Turns 80

OpenSea, One of the Top NFT Platforms, Has Seen Trading Volume Fall by More Than 90 Percent Since January