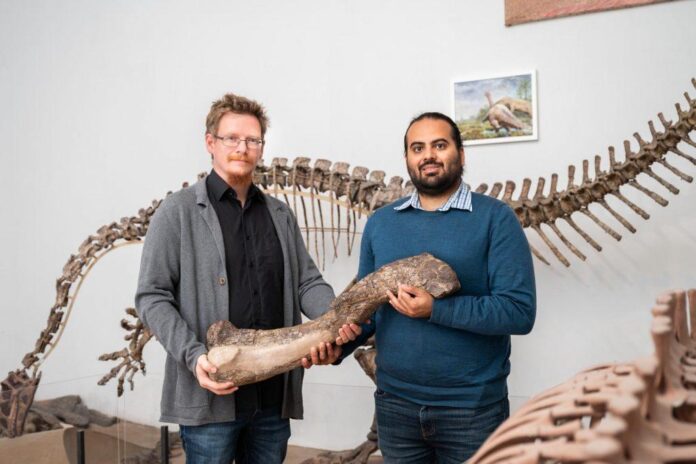 For the past century, a previously unknown dinosaur species lay hidden in a foundational cache of prehistoric bones held at the University of Tübingen in Germany. The newly identified dinosaur, Tuebingosaurus maierfritzorum, gives paleontologists a clearer picture of the diversity of prehistoric life on the European continent.

Led by Ingmar Werneburg and Omar Rafael Regalado Fernandez, paleontologists from the University’s Senckenberg Centre spent a year studying a collection of bones at the university. Of particular interest to researchers was a hindquarters skeleton first unearthed in a quarry near Trossingen, in 1922.

They found that a number of bones had been incorrectly classified as specimens of the Plateosaurus genus, a dinosaur species that was common to Europe 200 million years ago. According to a press release from the university, researchers saw disparities between the university’s partial skeleton and the average Plateosaurus. Their skeleton had broad, strong hip bones “with fused sacral vertebrae” that points to four-legged locomotion—while Plateosauridae were bipedal.

Over email, Regalado Fernandez also told Artnet News that “In Tuebingosaurus, the bone growth had stages, so the animal grew for some time, then stopped growing for a while before growing again; Plateosaurus seemed to have continuous growth.” 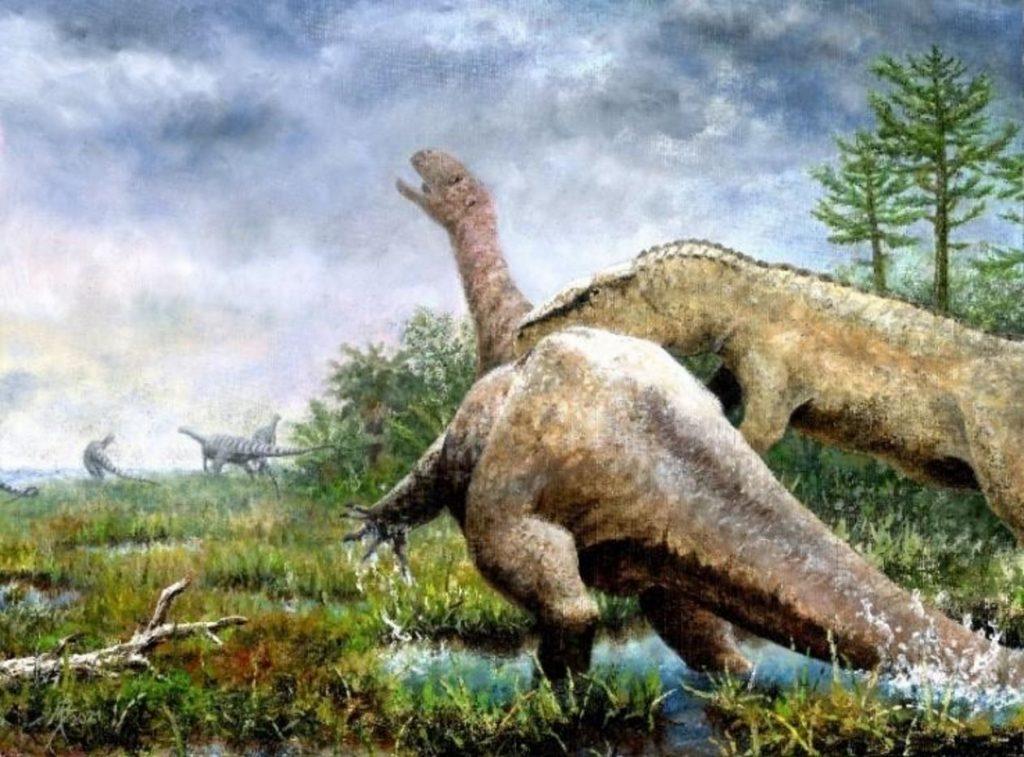 Reconstruction how the death of this particular Tuebingosaurus maierfritzorum may have occurred. Bones of the predatory dinosaur Teratosaurus were also found in Trossingen.

“The scientists recategorized the partial skeleton from Trossingen… and established that they had discovered a previously unknown species and genus,” the university release stated.

The team’s findings, published in Vertebrate Zoology on September 8, officially named the new species Tuebingosaurus maierfritzorum—to honor the university and two notable German zoologists. This long-necked herbivore lived about 203 to 211 million years ago in the southwest German region known today as Swabian Alb.

By analyzing the bones and surrounding sedimentary rock, researchers even determined this particular Tuebingosaurus died by sinking into a swamp.

Regalado Fernandez said the team’s work started in 2016, when he visited the University of Tübingen while earning his PhD at UCL, London. “I found the fossils of the hip of Tuebingosaurus in the collection without labels,” he recalled. When Regalado Fernandez returned to the U.K., Werneburg studied where the fossils were dug up in the first place. 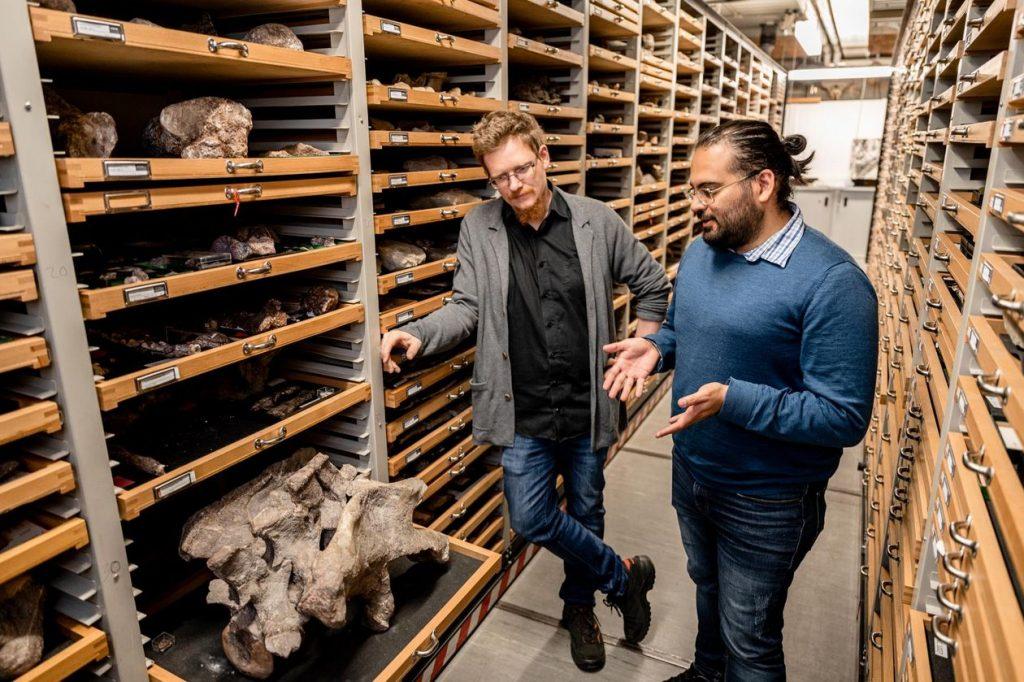 Ingmar Werneburg (left) and Omar Rafael Regalado Fernandez (right) in the archive of the paleontological collection at Tübingen. The hips of Tuebingosaurus maierfritzorum can be seen in the foreground.

“Fossils alone do not give us the whole story,” Regalado Fernandez said. “We need data regarding the locality, the layer, and the type of environment of the locality where they were found.”

After he finished his doctorate in 2019, Regalado Fernandez circled back with Werneburg, who had located the origins of the fossils. Now the team just needed to identify the species.

“Unfortunately, it became clear to us that all the specimens in the collection required a reorganization, primarily due to lost, unpublished or misplaced documents,” Regalado Fernandez noted. “It has taken one year to inventory everything we have—some specimens have been lost, and others were considered lost but were found relabelled or misplaced.”

But the researchers’ work is far from done. “Species are difficult to sort out because nature does not come into neatly defined boxes, and speciation—the process by which new species originate—can happen due to several factors,” Regalado Fernandez wrote. “Sometimes, differences in sexual behaviour generate a new species. Sometimes, they specialize in eating different things to avoid competition.”

But this study also brings insights for paleontologists on a grander scale. “Dinosaurs in Europe were more diverse than previously thought,” Regalado Fernandez surmised. “And we have understood that the transition from small bipedal dinosaurs to large quadrupedal ones, like Brachiosaurus, occurred more quickly than we first imagined.”

“We need more work on the collection, and we need to compare our specimens with other specimens from Europe,” he added, “so the project is still just starting.”