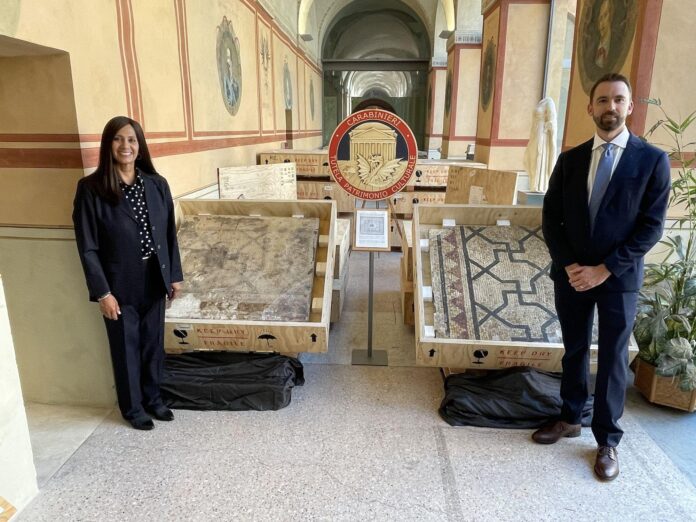 Nearly a century after its disappearance, a 2,000-year-old Italian mosaic was returned in April to the Italian government by the Federal Bureau of Investigation (FBI). The artwork features a portrait of Medusa and had been kept at a storage facility in Los Angeles since the 1980s, according to the FBI, which announced the repatriation on 2 September.

The bureau’s Art Crime Team has been working on the case since late 2020, when an attorney contacted a special agent about a client who had acquired the mosaic. According to the FBI, it had been “entered into cultural property records in 1909”. The paper trail goes cold until 1959, when an advertisement appeared in a newspaper showing the mosaic for sale in the Los Angeles area.

It is not clear how its last owner came to possess it. They offered to return the work because they were unable to sell it, since they had no provenance information. The art squad of Italy’s military police, the carabinieri, authenticated the mosaic.

“We worked with the owner and made sure we documented the condition and had everything we needed to ship it back to Italy,” FBI special agent Allen Grove said. “We then worked with the Italian consulate here in Los Angeles. This is something of great interest to Italy; they came and inspected the mosaic and helped us facilitate the logistics of actually getting it back to Italy.”

The mosaic had at some point been cut into 16 pieces, which had been individually stored on pallets in Los Angeles that weighed between 75 and 200 pounds. Several were termite-infested, the bureau said, but the pieces were “largely intact thanks to the climate-controlled facility they’d been kept in”.

Experts are now restoring the mosaic pieces so they can go on view one day.

“The mosaic was handcrafted from an age where people put an amazing amount of care and effort into it. It really speaks to the ingenuity and creativity of the time,” Grove said. “It’s not meant to be in Los Angeles. The mosaic belongs to the people of Rome. It allows us to understand a bit about the history of humans 2,000 years ago.”

Art Industry News: An Australian Art Dealer Has Gone Into Hiding to Escape From His Artists and Other Debtors + Other Stories

The Artist and Designer Thomas Badger Has Figured Out a Way to Create Electrifying Paintings (or Something?) Out of Furniture