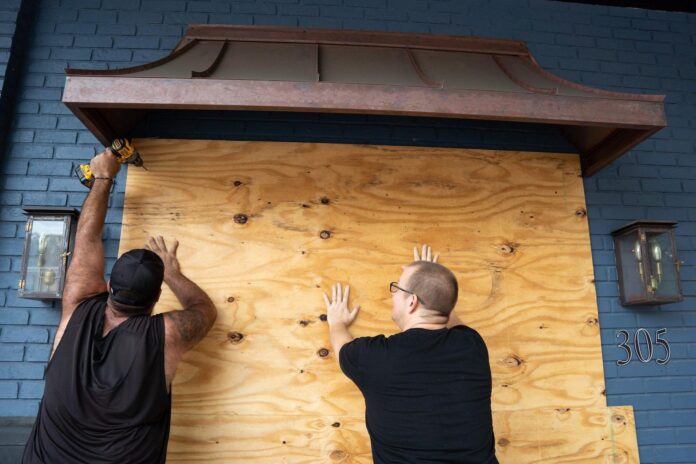 Hurricane Ian is expected to make landfall early in the morning on 29 September somewhere between Tampa Bay and Fort Myers, a stretch of Florida’s west coast that is home to more than 3 million residents and many museums. The hurricane, which could be as powerful as a category three when it makes landfall with winds in the range of 111-129 miles per hour (178-208km per hour), could also bring a storm surge of up to 10ft (about three metres). As a result, evacuation orders have been issued for many coastal communities and many of the region’s museums have closed so staff can safeguard their buildings and collections.

The region’s greatest concentration of museums is located in St Petersburg and Tampa Bay, where the last major direct hit from a hurricane (in 1921) brought an 11ft storm surge with it that flooded downtown Tampa. The Tampa Museum of Art closed on 26 September and will remain shuttered at least through 30 September.

“Hurricane preparations at the Tampa Museum of Art are already underway, and staff is diligently working to ensure the safety of our artwork and objects in the museum,” according to a statement posted on the museum’s website. Just across the Hillsborough River from the Tampa Museum of Art, the Henry B. Plant Museum is likewise closed indefinitely “due to the expected high winds across the region and potential storm surge that may occur along Tampa Bay’s coastal areas from Hurricane Ian”, per a statement on its website.

The Museum of Fine Arts St Petersburg—whose collection includes works by Claude Monet, Berthe Morisot, Elisabeth Vigée Le Brun and Georgia O’Keeffe—closed on 26 September to begin “extensive preparations ahead of Hurricane Ian to ensure the safety of the objects in the museum” and will reopen “after we assess the impact of the hurricane”.

The Ringling, a complex of museums, gardens and educational facilities in Sarasota, Florida, is “closed until further notice due to Hurricane Ian”, per a statement on its website. The nearby Sarasota Art Museum is likewise closed indefinitely “due to the current trajectory of Hurricane Ian”.

Artis-Naples, a cultural campus that is home to the Naples Philharmonic and the Baker Museum, is closed until further notice and an event planned for the evening of 28 September has been cancelled. “The safety of our employees and patrons is our top priority,” a statement posted by Artis-Naples reads, “and we will make future announcements about any changes and our reopening after we assess the impact of the hurricane.”

The Bob Rauschenberg Gallery at Florida Southwestern State College in Fort Myers is closed through 29 September, as are all other campus facilities. Also in Fort Myers, the historic winter estates of Thomas Edison and Henry Ford are closed 27 and 28 September.

Closures are not limited to coastal areas, either. Hurricane Ian expected to cut a path across the top of the Floridian peninsula toward Jacksonville, putting Orlando directly in its path. Museums there are also closing in anticipation. The Orlando Museum of Art, which has been embroiled in controversy of late, will be closed on 28 and 29 September, as will the Morse Museum of American Art—home to the most comprehensive collection of Louis Comfort Tiffany works in the world.

How Art Helps Students Find Themselves