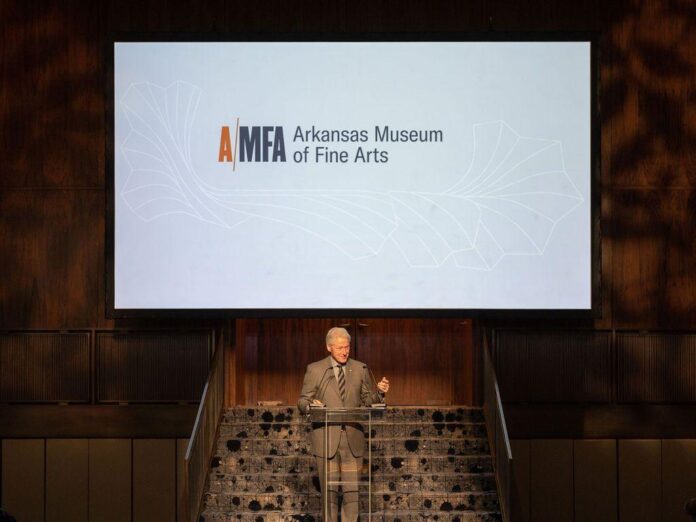 Former Arkansas governor and US president Bill Clinton joined leaders from the Arkansas Museum of Fine Arts (AMFA) for a luncheon at the Seagram Building in New York last week to reveal the extent of a transformative expansion of the museum, which has been closed for a $155m renovation since 2019 and will reopen in April next year.

The 11-acre campus in downtown Little Rock, Arkansas, has been reimagined by the American firm Studio Gang Architects, with landscape design that extends onto the adjoining MacArthur Park devised by the New York-based Kate Orff of Scape Landscape Architecture. The main addition to the 133,000 sq. ft building is a light-flooded space inspired by what the architecture firm’s principal Jeanne Gang describes as a “blossom” that connects the north and south axes of the museum.

During the event, Clinton―who is now based in New York, but was born in Arkansas and served as the governor and attorney general of the state between the late 1970s to the early 1990s―said he “gets the jitters” when he doesn’t frequently return to his home state, and that the AMFA was “always a special place even when it wasn’t in such a beautiful house”.

He also joked that “Studio Gang is a cool name”, and added, “I’m here today not only as a booster of my native state but also because I think this project comes with promise not only for Arkansas but for embodying the kinds of things that all of us who care about building and maintaining community should be thinking about doing everywhere in the country where it’s feasible.”

The AMFA holds a collection of around 14,000 artworks, with a significant strength being 20th century North American and European works on paper. Some cornerstones of the collection, including pieces by Georgia O’Keeffe and Diego Rivera, will be exhibited in the forthcoming collection exhibition titled Drawn to Paper.

In April, the museum will also unveil exhibitions by the artists Chakaia Booker and Sun Xun, and debut a series of large-scale works including pieces by Anne Lindberg and Natasha Bowdoin.