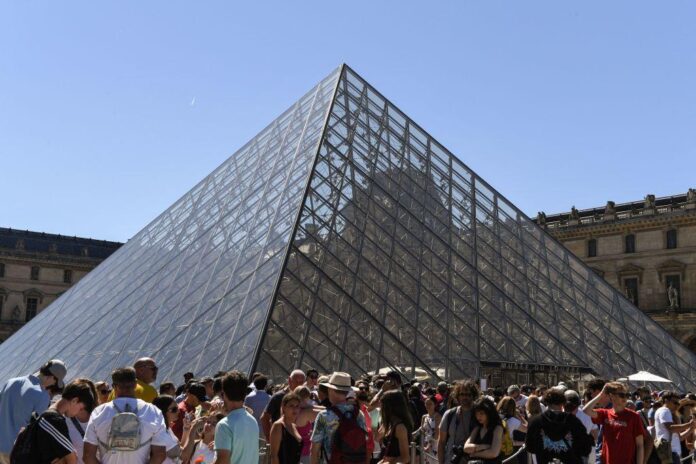 Two high-ranking archaeologists and curators are being held for questioning by French investigators as part of a probe into a global art-trafficking scandal that has implicated the Louvre Abu Dhabi, the Met, and former Louvre director Jean-Luc Martinez.

Jean-François Charnier and Noëmi Daucé are suspected of ignoring warnings about the questionable provenance of at least two allegedly stolen Egyptian antiquities worth millions, and urging the Louvre Abu Dhabi to acquire them, according to the French daily Liberation.

The pair are suspected of negligence when they worked at the private Agence France-Muséums (AFM), which was tasked with certifying the legality and provenance of ancient antiquities for the Louvre Abu Dhabi in time for its opening in 2017.

In May, Martinez was charged in France with “complicity of gang fraud and laundering” in the tangled trafficking case, which is being investigated in cooperation with the Manhattan District Attorney’s office. Though Martinez claims his innocence, the French government suspended his duties related to art trafficking, within his role as a cultural heritage ambassador in June.

Daucé, now a curator at the Louvre in Paris, was formerly head of the AFM’s archaeology department. Charnier, who was the scientific director of AFM and Martinez’s “right-hand man” according to Le Monde, is now an advisor at another French cultural agency, Afalula, for the cultural development of Saudi Arabia’s Al-Ula region.

Charnier and Daucé were questioned by the OCBC, the French office against art trafficking, but have not yet been charged with any crime. They may be held for questioning for up to 96 hours, beginning on Monday morning, according to Liberation, which broke the story.

Artnet News reached out to French authorities for confirmation and is awaiting their response.

The AFM was founded in 2007 as an international consultancy firm to help create the Louvre Abu Dahbi. Though private, it has shareholders in the public sector, the largest of which is the Louvre Museum. “This particular configuration—a private organization with public backing—means that France Muséums is able to support all kinds of projects,” according to the company’s website.

However, the AFM (often called France Muséums) has been in the spotlight for “real professional negligence” and “without a doubt, enabling criminal networks to sell the Egyptian antiquities” involved in the case, according to a report by the OCBC that was reviewed by Liberation.

In total, over €50 million worth of allegedly stolen ancient artworks are believed to have been approved by the AFM for acquisition by the Louvre Abu Dhabi, which is also a civil party in the case, along with the Louvre in Paris. An AFM spokesperson told Artnet News it has requested to be named a civil party as well.

According to the OCBC report quoted by Liberation, investigators found that Charnier, Daucé, and Martinez often appeared more concerned about pleasing their clients, filling up empty museum halls, and maintaining good diplomatic relations with the UAE, than with heeding the warnings of other experts.

According to Liberation, Charnier may have brushed aside concerns about at least one object: a rose granite stele referring to King Tutankhamun, later found to have been certified with multiple fake documents. The work was acquired for the museum, after Charnier reportedly gave into the wishes of Abu Dhabi’s chairman of the department of culture and tourism, Mohamed Khalifa al Mubarak, copresident of the Louvre Abu Dhabi’s acquisition commission.

As news broke earlier this spring of Charnier’s possible involvement with the acquisition of the suspect antiquities, he left his former job as scientific director of Afalula to take a quieter position as an advisor to the agency’s president, and has been preparing for questioning from authorities, according to Le Monde.

Contacted last month, the Louvre told Artnet News that Daucé could not comment on an ongoing investigation. Charnier could not be reached and Afalula did not respond to a request for comment.

Liberation also reported that authorities found several “abnormal” deposits made to Charnier’s bank account between 2016 and 2018 from a Belgian auction house run by brothers Ali and Hicham Aboutaam, whose Phoenix Ancient Art gallery in New York and Geneva has repeatedly been subject to police investigation in connection with illicit artifacts. The Aboutaam brothers also sold several works to the Louvre Abu Dhabi via Charnier, according to the French daily.