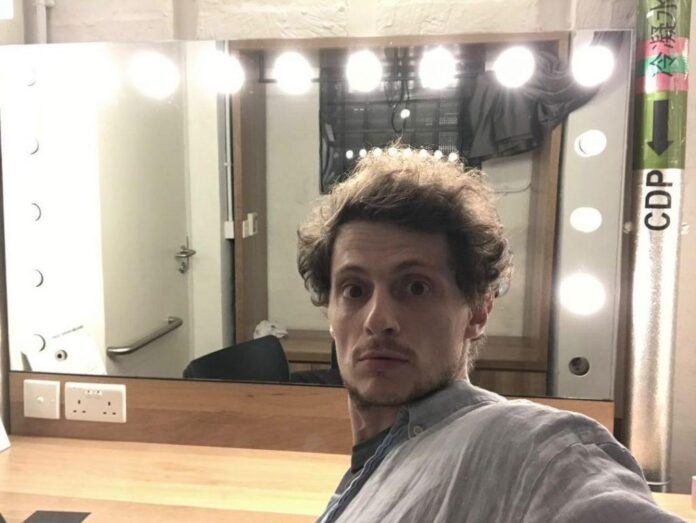 Gerosa orchestrated site-specific performances tailored to hot takes surrounding each event. In Venice, he staged the traveling “Scythian Pavilion” to comment on the Biennale’s nationalistic approach; in Basel, the second iteration of his “Ghost of the Author” booth concerned speculation in the art market; and in Kassel, a new group edition of his performance questioned who gets put into the art-historical canon.

“Many times I understand my performances either as alchemies or as initiation rituals,” Gerosa told Artnet News. “There is a transformation of the artwork.” That alchemy takes place when the institutions themselves intervene.

Gerosa grew up near Lake Como, Italy, where he tagged the name Cose from ages 12 to 17 before studying performing arts abroad between Holland, Italy, Ireland, and Denmark. He got his masters in visual anthropology between Slovenia and Sweden, and earned a PhD in religious and cultural studies from schools in Hong Kong and Tokyo.

“Whether it was a film, or graffiti, or theater,” Gerosa said. “I focus on the performative element.”

After spending six years in Mainland China, he moved to Hong Kong in 2013, and was hired five years later by the Tai Kwun Museum in Hong Kong as an art handler. There, he installed a 16-millimeter film by Korean video artist Nam June Paik that was inspired by John Cage’s “4’33.” Gerosa took the film—which is essentially white noise you can see—and carved his name into the celluloid as a comment on labor in the art world.

“I wanted to make a statement that art handlers are actually really ignored or invisible, but they do such a large part of the work,” Gerosa said. (He later told his supervisors about his deed.)

He continued his unsanctioned practice at Art Basel Hong Kong 2021, which he entered as an exhibitor with doctored credentials. There, he set up a “booth” titled “Ghost of the Author” in homage to Roland Barthes as a statement on ongoing debates in the art world about authenticity and its value.

“A mother with a three-year-old baby passed by,” Gerosa said. “I overheard that baby saying, ‘I want to see some ghosts’ in English.”

After the boy pulled a Basquiat catalogue from his stroller to show Gerosa some pictures, the artist gave the child a blank sheet of paper to make a drawing. Then he sold the boy’s work, convinced that Basquiat had possessed him.

Meanwhile, for a simultaneous work, he hired two women to hand out dried poppies at the event entrance in a performance titled that stood in as a remark on soft power and Britain’s role in the Opium Wars, which ravaged China between 1839 and 1860. 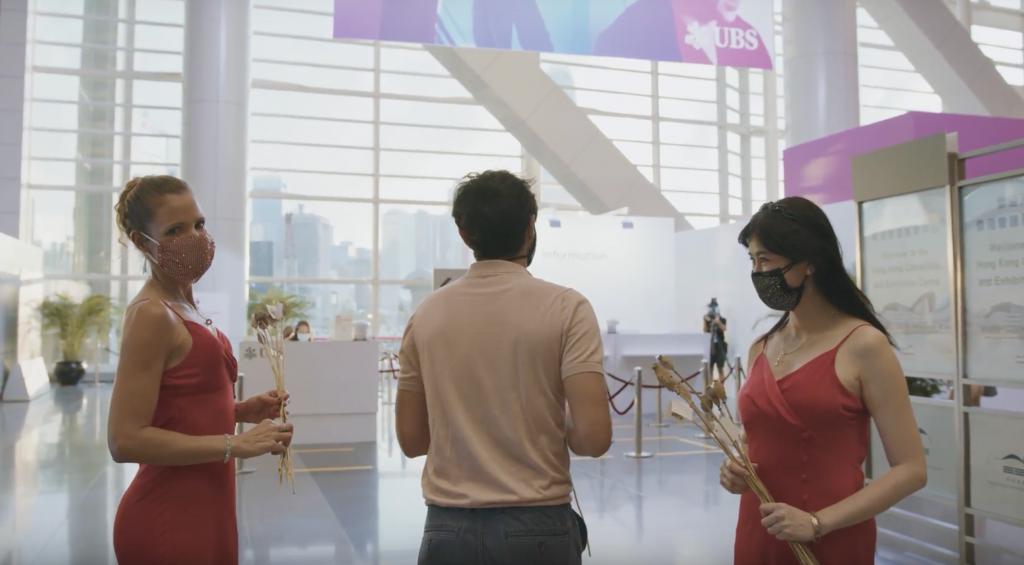 The third installment in Gerosa’s inaugural trilogy took place at the M+ museum in Hong Kong last November. For six months, he worked with museum interns on a surprise installation titled for which the group hid gummy bears throughout the building to represent the unseen efforts of interns. (One intern even produced a short film about their work experience from a gummy bear’s point of view.)

Gerosa then promised that any museum visitor who found one could bring it to his studio and receive a certificate of authenticity for the artwork, thus returning the institution to the people.

This year, Gerosa undertook a new project, the “Uninvited Trilogy,” which took advantage of the stars having aligned as the Venice Biennale and Documenta opened within weeks of each other.

In Venice, to challenge the event’s Eurocentric, nationalistic approach, Gerosa created the nomadic “Scythian Pavillion,” which took over the abandoned Russian pavilion for a bit.

There, he staged a one-woman pole dance adaptation of Stravinksy’s “Rite of Spring,” paying for the choreographer and performer from grants secured in Hong Kong. The dancer dressed modestly, but the spectacle provoked police to arrive, and Gerosa ended up with a €50 euro for organizing an unsanctioned event on Biennale territory.

“I used this fine as my formal confirmation that the performance happened,” he said. On a portion of the ticket allowing offenders to explain themselves, Gerosa wrote: “We’re sorry, we are nomads. We didn’t know we needed your permission.”

“Any national or non national participant in Venice has to pay a participation fee—€30,000 euro upwards,” he said. “So €50 was really much cheaper. It was really a bargain.” 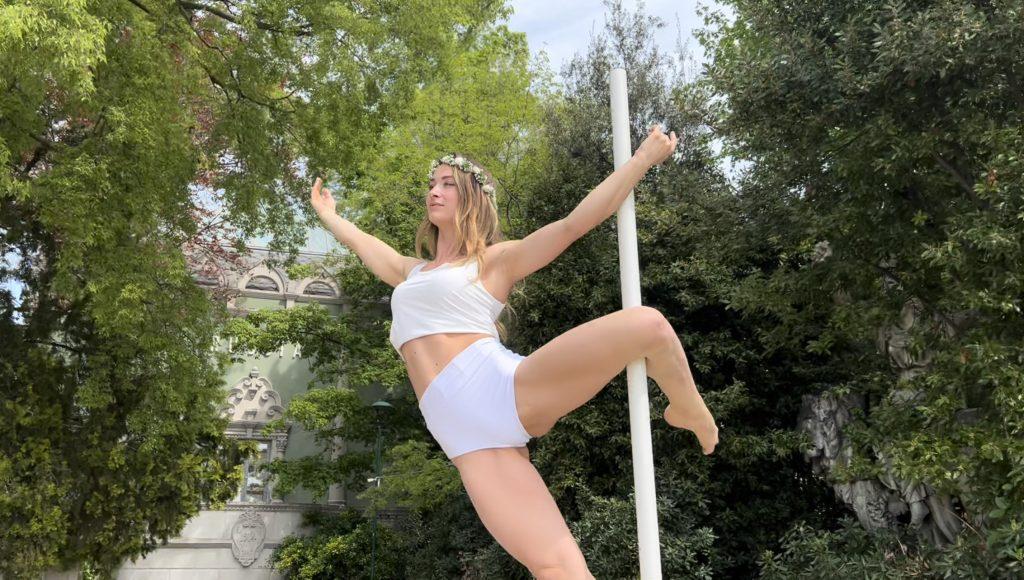 Dancer Louise Wawrzynska performing in  at Gerosa’s “Scythian Pavilion” before the empty Russian Pavilion at the 2022 Venice Bienniale. Photo courtesy of Alberto Gerosa.

At Documenta, Gerosa staged a performance titled that was inspired by a doctor from China’s Jiangsu province who injected workers with chicken blood throughout the 1950s to supercharge the labor force. The experiment stopped once it proved fatal, but its legend prevailed: migrant workers across China partake of the ritual still.

“It’s interesting because it shows that there is a very strong, irrational, and spiritual side of capitalism that is not often looked at,” Gerosa mused.

To avoid exoticizing the concept in Kassel, he forewent Chinese performers for a group of German artists pulled in through an open call. This time, there were no punitive measures, as Gerosa cleared his project with with ruangrupa, the collective that organized Documenta, ahead of time.

One member of the collective, however, told Gerosa that it would be a missed opportunity if the performance didn’t allow audiences to engage, share, and get involved. 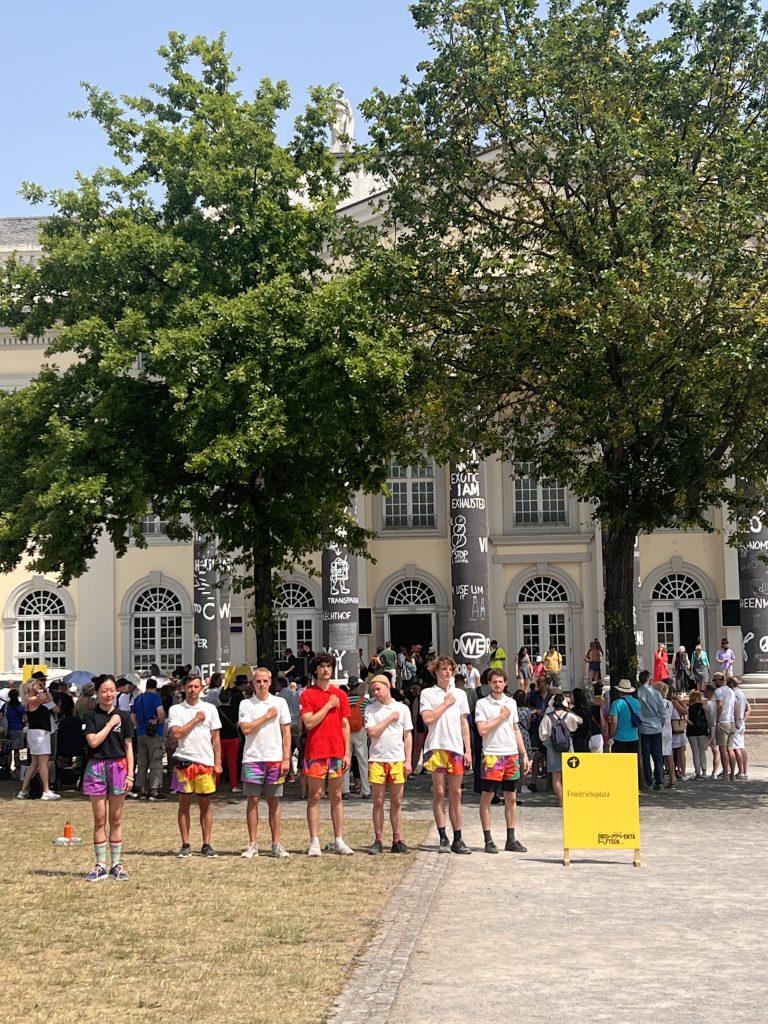 Performers putting on outside Documenta 2022. Photo courtesy of Alberto Gerosa.

“That inspired me,” Gerosa said. “I shouldn’t do performances for the sake of an aesthetically perfect little scheme. At the end of the day, it’s the emotional impact. You have to touch people.”

Now, Gerosa’s hitting New York for his next project, which will begin as an homage to his favorite artist, Tehching Hsieh, whom Gerosa will honor with events at the Met and another city museum before the summer is up.

Don’t say we didn’t warn you, and don’t even bother snitching. Getting caught is part of the plan.

Still, Gerosa doesn’t consider himself an antagonist. He’s simply seizing his power to participate in the art ecosystem. He wants to expose that power structures aren’t fixed.

“If you direct MoMA today, it doesn’t mean that you MoMA,” Gerosa said. “Your whole influence is temporary. It’s an agreement I can question anytime. If I make a better or more interesting use of your institution, then I am effectively hijacking.”

“I think people are quite passive,” Gerosa concluded. “Many art handlers don’t notice that they can carve on the artwork their name. It’s perfectly doable.”