Home News From a restituted Chagall painting to a family portrait by Freud: our... 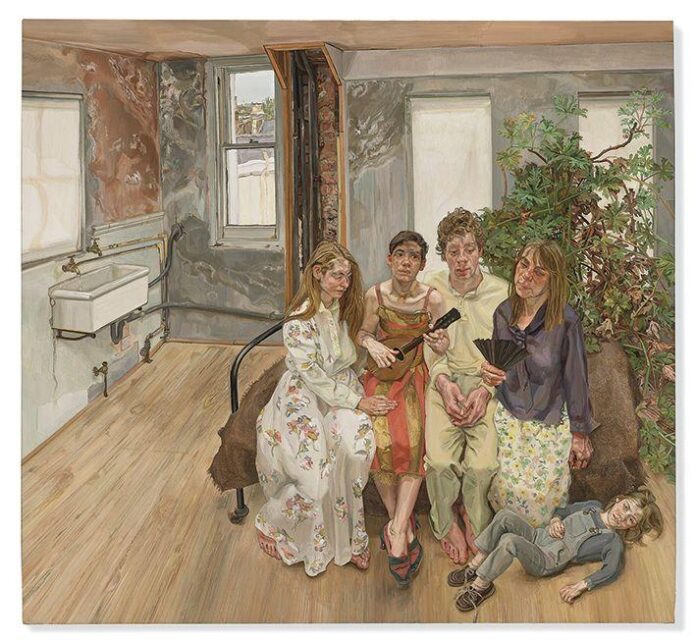 Estimate: On request and in excess of $75m

The term “masterpiece” may be overused in the market, but it is challenging to think of a better word to describe this 2m-wide group portrait by the British artist Lucian Freud. The scene includes two of his children and has not been on the market since it was bought by the Paul G Allen in 1998, setting a record for the artist at the time, when it achieved $5.8m. The title’s direct reference to Watteau is a fitting tribute to the Rococo artist’s wistful figure groupings (Fêtes Galantes and characters from the Commedia dell’Arte) as well as his palette and attention to surface detail. The canvas’s impressive exhibition history is also likely to prove appealing, having been shown in some of London’s top institutions including the Tate, the Royal Academy of Arts and the Whitechapel Art Gallery.

The painting is being sold in the first half of a two-part presentation of items owned by the late philanthropist, who co-founded the software giant Microsoft. Significant examples by Paul Cézanne, David Hockney and Georges Seurat are also on offer as part of the sale.

This celebrated example of the artist’s work takes centre stage in a 90-lot sale arriving direct from Claude and François-Xavier Lalanne’s daughter Dorothée, and includes numerous examples that have never been seen before in public. A selection of works from the sale were displayed during fashion week at the House of Dior (30 Avenue Montaigne), extending a relationship between the artists and the fashion house, which first began when the former were asked to design displays for the same venue in 1957.

“This sale allows us, once again, to highlight the creative skill of these two world-renowned French artists,” says Florent Jeanniard, the co-worldwide head of 20th-century design at Sotheby’s. Two online sales will follow the main event, representing a total of 200 works on offer.

This arresting portrait of the artist’s father is one of 15 works of art that the French National Assembly restituted earlier this year (also including Gustav Klimt’s Roses under the Trees). It has been consigned by the heirs of David Cender, a violin maker who lived in Łódź, Poland, before being sent to Auschwitz in 1940. In an unusual twist, the artist is known to have bought the painting back after the war (with no knowledge of its recent history), before it eventually ended up at the Centre Pompidou in Paris, via the artist’s estate. “The rarity of this exceptional painting, coupled with its storied provenance, will create strong resonance and reaction in this marketplace,” says Jeremiah Evarts, Phillips’s deputy chairman, Americas.

A young woman dominates her interior in this classic work by the major South African artist who represented the country at the Venice Biennale in the 1950s.

“Unlike [Irma Stern’s] depictions of restrained Arab clergy and beguiling Watusi royalty, all in traditional dress, African Woman is remarkably contemporary in spirit. The sitter wears a shimmering blue dress with white polka dots, and her gentle gaze and demeanour evoke a moving sense of familiarity,” says Alastair Meredith, a senior art specialist at Strauss & Co. “The long-overdue interest in women Modernists drives demand for her paintings, both in her native South Africa and elsewhere,” he adds.

These striking vases have enjoyed a somewhat luxurious past, having once stood in the Château de Ferrières owned by Baron James de Rothschild (1792-1868), and later taking pride of place in the collection of a Parisian collector, housed in the French capital’s Golden Triangle.

Believed to have been commissioned by the Chinese Emperor Qianlong (1711-1799), the blue gourds (or vessels—this shape is often equated with blessings) are positioned on mounts thought to have been made by the English craftsman Benjamin Lewis Vulliamy. “These magnificent gourds, rarely presented as a pair, will not fail to arouse the interest of collectors of Asian art from all continents,” says Stéphane Aubert, an associate director and auctioneer at Artcurial. The total estimate for the sale is €1m.