SHEPARD IN NEED OF FAIREY GODMOTHER

I hate to burst anyone’s bubble about Germany’s famously generous cultural budget, but it seems that there is some trouble brewing in Bavaria.

This fall, street art legend Shepard Fairey—the artist known for appropriating the aesthetic of propaganda to create his OBEY clothing line featuring Andre the Giant’s face and Barack Obama’s famous “Hope” campaign posters—got his first solo show in Germany at a new non-profit museum called Amuseum in Munich. The space, which specializes in urban art and is run by arts organization Positive Propaganda, was able to put on its inaugural show, “New Clear Power” (get it?), thanks to the German office of arts and culture’s pledge to bankroll the institution to the tune of €200,000.

The show opened on November 5, and all was well and great until last week, when the funding was unceremoniously slashed to just an quarter of what was promised. “The decision came to us as a shock,” the museum’s founder, Sebastian Pohl, told Wet Paint. “They’re saying there’s not enough money, which is not true… They just put the money aside.”

Pohl says that the show, originally scheduled to run through May, will have to close early on January 1, as the new €50,000 budget is not enough to keep the museum running beyond then. (Amuseum, we hardly knew ye!) “The fact is we can’t afford to run a museum if we can’t afford to pay the people,” Pohl explained. “It’s not that I want to close, it’s that I need to.”

Why would the local government renege on their commitment to the arts, you may ask? Well, apparently, other local art spaces and artists complained that the Amuseum was eating up the entire cultural budget, and the Green Party took away the money in order to redistribute it to some squeakier wheels.

Sources close to the issue told Wet Paint that many felt frustrated that the Amuseum wasn’t using the funds to show a local artist’s work (Fairey is from South Carolina) and complained that they didn’t have enough money to fund their own initiatives targeting artists closer to home. The Amuseum is currently petitioning to get the full pledge reallocated to their space, with two weeks left for the people of Munich to go see the show if nothing changes.

Fairey addressed the matter himself in a letter to Munich’s deputy mayor, Katrin Habenschaden, writing, “With the closure of this museum you not only deprive the residents of your city the posterity of a unique temple of inspiration and encounter…you are missing an opportunity to enhance the reputation of Munich and Bavaria as a liberal and progressive place in the international arena of art and culture.”

Fairey wrote in an email to Wet Paint, “I don’t have a detailed understanding of all the workings between the museum and the city, but generally speaking, I think it’s amazing that the city would provide support for a non-profit doing the kind of work that Amuseum has just begun attempting to do.” He stressed that his concern was above all for the museum and not the dulling of his own spotlight: “I would be disappointed if my show ends early but more disappointed in how it impacts other artists and the Munich community.”

THE BOWERY IS GETTING A NEW GALLERY 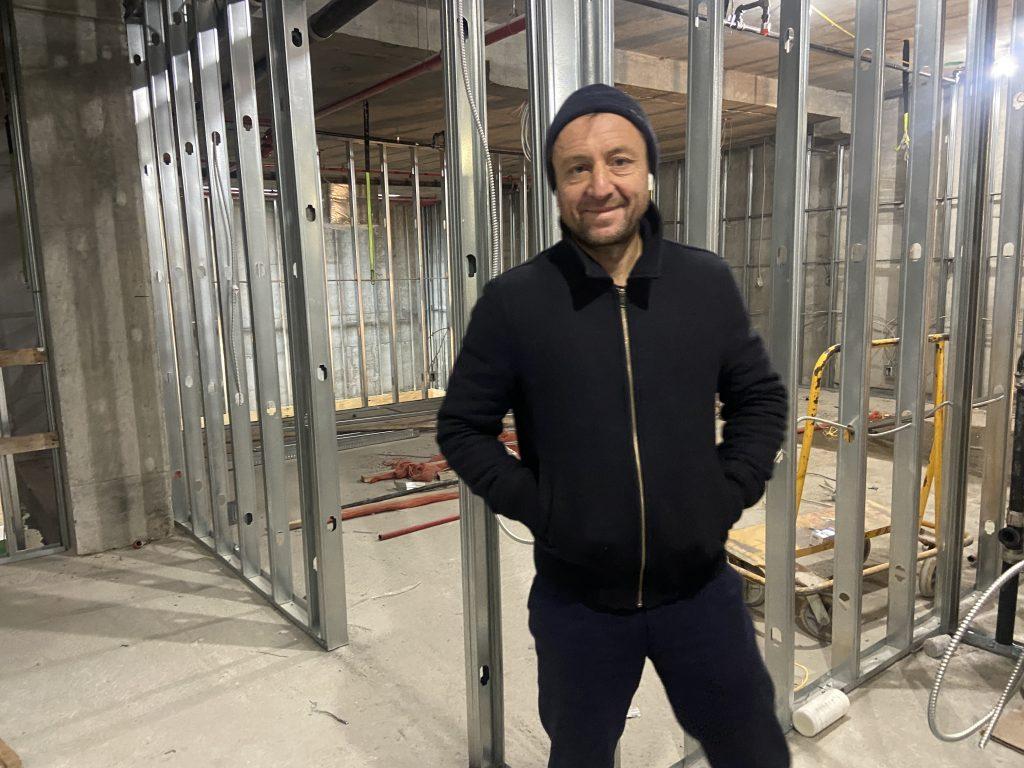 Olivier Babin in his new space on the Bowery. Photo by Annie Armstrong.

It was about time that Clearing, the tastemaking gallery that has launched the careers of Korakrit Arunanondchai, Hugh Hayden, and Harold Ancart, among others, left Bushwick. After ten years in what I like to affectionately call Grimes Square, the gallery announced that it was abandoning Brooklyn for a nice new space in the pulsating art-world ecosystem that is Manhattan. When I read that a while back, I wondered what area the gallery’s proprietor, Olivier Babin, would choose. The gallery’s existence in Bushwick reminded me a bit of Gavin Brown’s intrepid venture uptown—you have to be cool in order to seduce people away from Manhattan’s gallery hubs.

Wet Paint got the details of Clearing’s new home in New York. Yesterday morning, I strolled over to the Bowery where I laid eyes on three stories and 6,000 square feet of raw space that will eventually host videos by Meriem Bennani, laser projections by Matt Copson, and Calvin Marcus’s face on a chicken carcass, for instance.

“People just weren’t really coming to Bushwick,” Babin told me amid the noise of construction. “I’d have people that told me they love my gallery’s programming, and I’d ask what the last show they saw there was, and it would have been 18 months ago.” They’d been shopping around for a space for over a year and a half before deciding on a three-story just across the street from the New Museum, just up the way from Mark Rothko’s former studio and the John Giorno Foundation, and spitting distance from other Bowery mainstays such as the Hole, Andrew Edlin Gallery, and Arsenal Contemporary. (Blind item: it’s right next to my pilates studio, so Babin can look forward to a certain sweaty journalist coming by periodically.)

All this to say, the art world seems to have its eyes on Clearing as a gallery with the potential to level up into the blue-chip big leagues. Its arrival into Manhattan feels like a marker of the gallery’s rise. The new space opens with a group show titled “Maiden Voyage” on February 1 of next year, followed by a string of solo shows by Adam Alessi, Sedrick Chisom, and Matt Copson. A fun detail of the new space, which is significantly larger than the former Bushwick locale, is that Babin plans to create programming for the street-facing window that will be lit up at night. “Lamps!” he told me with a glint in his eye. “I’m going to bring in some lamps.”

The Rubell Museum seems to be open for weddings, and Yayoi Kusama’s Narcissus Garden is a natural backdrop for a bride …Anton Svyatsky is parting ways with Fragment and changing his gallery name to Management … Gstaad Guy, the auction world’s favorite TikTok celebrity, is back with a new paid post about buying a George Condo from Sotheby’s … Somebody paid a whopping $6,000 to a scalper outside of Art Basel Miami Beach’s VIP opening for a ticket, woof … Of all the victims to choose, the Metropolitan Opera’s booking website crashed due to a cyberattack, presumably at the hands of the Grinch attempting to foil my holiday plans … Before Sam Bankman-Fried was convicted, he was apparently in talks to purchase Kendall Jenner’s tequila brand 818 … Apparently Alain Servais is a Rosalia fan, which I did not see coming … White Cube is taking up 3,122 square feet of office space at 980 Madison to accompany its forthcoming New York gallery at 1002 Madison Avenue …

I love karaoke. A few of you are misfortunate enough to know this. After a recent rendition of my favorite Bruce Springsteen song, I couldn’t help but wonder, who else in the art world loves karaoke? Furthermore, who’s actually good at it?

We’ve got one more column before the holiday season, and selfishly, I’d like to know: Which Wet Paint from this year did you think was the most scandalous? Email your response to [email protected].