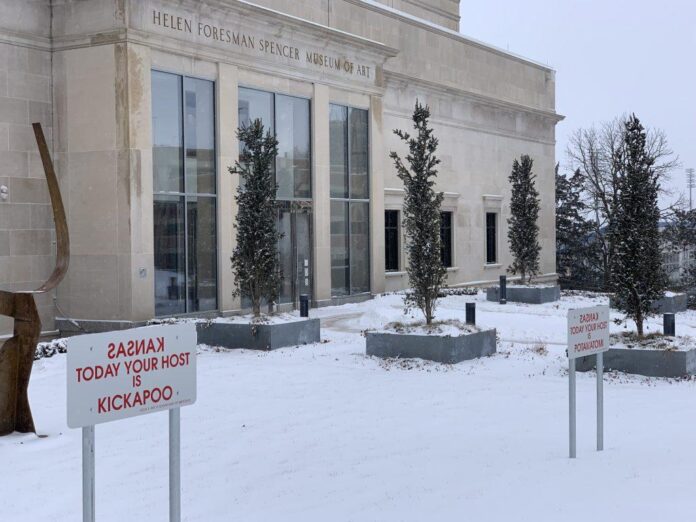 The crowd that gathered outside the Spencer Museum of Art at the University of Kansas on December 10 wasn’t there to visit a new exhibition, but to witness an apology—two, to be precise.

Back in September 2021, a pair of 23-year-old students had stolen an artwork by Native American artist Edgar Heap of Birds installed outside the Spencer Museum of Art. The piece was one of five comprising “Native Hosts,” a series of panel signs with the word “Kansas” written backwards followed by the name of a tribe native to the state written underneath.

The other four signs were vandalized, forcing the museum to reinstall “Native Hosts” one month after first opening the display. The thieves were quickly identified by KU Public Safety using CCTV images. They duly returned the work, claiming it had been stolen on aesthetic, rather than political grounds: they thought it would make a nice decoration for their apartment.

Rather than face public charges however, John Wichlenski and Samuel McKnight agreed to diversions, a year-long process that included attending a restorative justice circle attended by representatives from the museum and the University of Kansas’ First Nations Student Association. Then, they were required to make a public apology.

“We are here to apologize to anyone who felt the ripple effects of the situation,” Wichlenski said, standing next to McKnight. “Sorry for the angst, the suffering, the somberness, and the overall opacity over the past 14 months. There is truthfully not a second that goes by that I don’t unconditionally regret our actions and the damage they caused.”

The attack on Heap of Birds’ work echoes one that took place on University of Illinois’ Urbana-Champaign campus in 2009. “The crime has shown that in America university communities there is much work to be done towards Indigenous respect and equity,” the artist told Artnet over email, “regarding the defendants, an apology is totally appropriate and a way to begin again, a positive step with more good efforts to follow.”

“Native Hosts” was created by Heap of Birds, a member of the Cheyenne and Arapaho Nation, for “The Power of Place,” a 2019 exhibition which celebrated work by 30 artists who had received degrees from the University. The artist, who was born in Wichita, received his BFA from the University of Kansas in 1976. “Native Hosts” is part of an ongoing series in which Heap of Birds places steel signs in public places around the United States.

“The visual and emotional tension that Heap of Birds creates means to remind of us of the displacement of Native Americans from their homelands,” Saralyn Reece Hardy, the museum’s director, said at the December 10 meeting. “I want to pledge our [the museum’s] ongoing stewardship of this work and our commitment to working with and learning from indigenous artists and communities.”

Never-Before-Seen Paul McCartney Photos from the Height of Beatlemania Will Reopen...