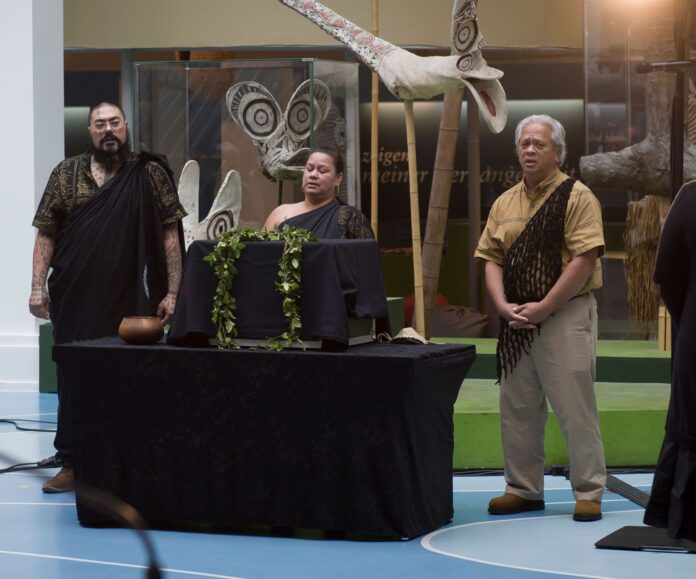 Eleven years after the Prussian Cultural Heritage Foundation took over the Luschan Collection, the anthropological collection of Berlin’s Charité hospital, the first human remains from it will be repatriated to their country of origin.

In a handover ceremony in Berlin today, 32 skulls from the Museum for Pre- and Early History in Berlin will be returned to representatives of the Office of Hawaiian Affairs.

These ancestral Hawaiian skeletal remains called iwi kūpuna are estimated to be several hundred years old. They were acquired for the Luschan Collection in a colonial context when Otto Finsch (1839-1917), a naturalist working for the German New Guinea Company, collected them during one of his South Sea expeditions around 1880.

Once repatriated to Hawaii, the iwi kūpuna will be reburied close to the areas from which they were originally taken, including the Waimãnalo prehistoric burial place on O’ahu Island.

This restitution is the result of a collaboration between the Prussian Cultural Heritage Foundation (Stiftung Preussischer Kulturbesitz, SPK) and the Office of Hawaiian Affairs (OHA) that started in 2017, and a decision by the SPK’s board of trustees, taken in December 2021. The handover of iwi kūpuna is the first of two repatriations to the archipelago, as the SPK has also decided to return Hawaiian funerary items (moepū) kept by Berlin’s Ethnological Museum.

SPK officials view this first restitution of human remains from the Luschan Collection as an opportunity for Germany to take responsibility for its colonial past. “Repatriation is only one step towards building a new relationship with the countries of origin. Ideally, our museums can take it as a starting point to work together, learn from each other and to enhance our mutual understanding,” they tell The Art Newspaper.

For OHA representative Edward Halealoha Ayau, the repatriation of these human remains is an expression of kuleana (responsibility) as well as “re-humanisation” that will enable descendants to “restore their ancestral foundation”.

This semi-autonomous state agency has a mandate to improve the wellbeing of Native Hawaiians. During its current mission in Europe this month, the OHA is due to oversee repatriation of 58 iwi kūpuna from four institutions in Germany—the Museum for Pre- and Early History in Berlin, the Overseas Museum in Bremen, Georg-August University in Göttingen and Friedrich Schiller University in Jena—and one in Austria, the Natural History Museum in Vienna.

The return of iwi kūpuna takes place within the broader context of Germany’s ambition to come to terms with its colonial past and pay respect to human remains kept in different collections across the country’s museums and universities.

A significant starting point for scientific research came in 2011 when the SPK became responsibile for around 7,700 human remains in the Charité hospital’s Museum of Medical History Berlin. The acquisition led the foundation to develop an official stance on human remains in 2015, prioritising provenance research and acquisition conditions in order for Germany to work with countries and Indigenous communities to jointly decide which items should be repatriated. Researchers estimate that around 40% of items in the Luschan Collection were acquired in colonial contexts.

The SPK adds: “[We] believe that the process of repatriation needs to be done with great care and sensitivity. There must be no unresearched returns with the result that remains of human beings are once again sent where they do not belong. It must also be clear that the descendants, communities or countries of origin welcome the repatriation. In our experience, this is not always the case and it is not for us as Germans to impose our ideas and wishes at this point.”

Heading to Seoul for Frieze? Here’s Where to Go, Where to Stay, and Where to Eat Korean Fried Chicken, According to Art-World Insiders

What is Digital Art