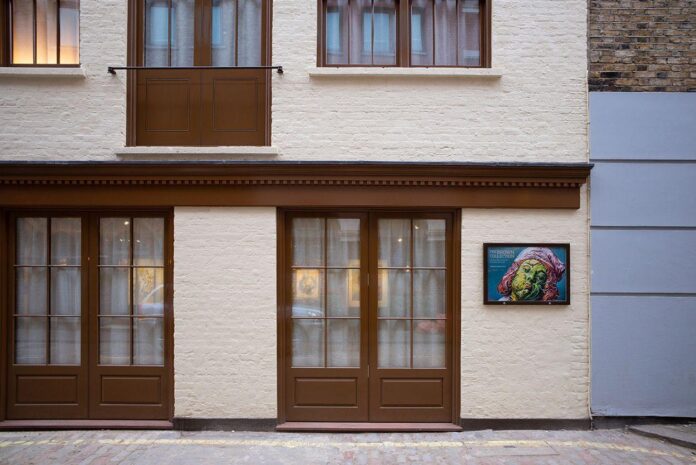 The artist Glenn Brown will open a museum of his own work in London during Frieze Week in October. The British painter and sculptor—who we interviewed for the 50th episode of our A brush with… podcast—will show paintings, sculptures and drawings he has kept from across his career in a house in Bentinck Mews in Marylebone, central London. In time, he will bring them together with works by historic artists in his private collection.

The Brown Collection, as the space will be called, is a stone’s throw from the Wallace Collection, whose paintings have been the source for some of Brown’s best-known works. The artist has funded the purchase and restoration of the building and will pay for the new museum himself, he says.

The idea emerged unexpectedly, he explains. He bought the house six years ago, after initially just looking for offices. “It quite quickly became apparent that it would be nice to have somewhere that I actually wanted to show my work in,” he says, “because I was frustrated that people couldn’t see my work anywhere in London”.

Brown’s art, particularly his finely worked paintings that appropriate and reimagine other artists’ images and language, is much in demand. He is represented by the Gagosian and Max Hetzler galleries and his auction record, for his 1998 painting The Tragic Conversion of Salvador Dalí (after John Martin), is £5.1m (with fees). Yet Brown owns many of his most significant pieces. “I’ve always tried to keep my work as much as possible,” he says. “I probably didn’t keep enough of it in the early days and, to that end, we have bought some back. If I have the paintings, they get continually lent out and borrowed by museums and collections around the world. So it feels that they’re not hidden away and people can see them.”

So why does he feel that it still isn’t visible enough? “I do a commercial show every two to three years,” he says. “So by the time I do a sort of rotation of New York, London, Berlin, maybe Los Angeles or Paris, it’s usually nine or 10 years before I come back. I’m just about to do a show in New York [at Gagosian in November] and it’s more than nine years since I last showed there. The rotation of the commercial shows I do is very slow, just by the nature of the work.” In addition, only one of his paintings—Sex (2003), discussed at length on the podcast—is in the Tate Collection. It is not currently on display.

Among the works that will hang in The Brown Collection when it opens are Searched Hard for You and Your Special Ways (1995), the first of several Brown paintings in which Jean-Honoré Fragonard’s A Boy as Pierrot (around 1785) in the Wallace Collection is turned upside down. Also on view will be International Velvet (2004), a landmark example of Brown’s “blob paintings”, based on a Georg Baselitz work. The blobs “were more surreal in terms of the way they presented the human face”, he says. “Things didn’t necessarily have to be in the right order, orifices didn’t have to be in the right place. I started to have far more fun with the composition and colour and texture of the work. Everything was far less prescribed. And that was one of the first ones where I really felt more freed up, hence why I kept it.”

He had been considering “giving work to various institutions towards their collections”, he says. But a friend, who is an accountant, suggested that he kept the works and open his own space so that “it was flexible and you could still have people see it, rather than giving the work away”, Brown recalls. “So it was actually an accountant that came up with the idea and I couldn’t really argue with him financially, even though, logically, it seems like an odd thing to do.”

The Marylebone space took four years to restore. Originally two mews buildings—stables with living quarters for coachmen and stable hands—it had been a furniture workshop with a ground-floor showroom. “We basically took it back to its four external walls,” he says, after it “had been messed around with a great deal over the last 100 years. But I wanted to make it look like nothing much has happened to it. We tried to get it back to its original state as much as possible.” He wants it to be “the ideal space to show my paintings in, which is not big and vacuous and alienating, but not too cosy and domestic”.

When it opens in October, it will feature just Brown’s work, but he will gradually begin to introduce paintings, drawings and prints by other artists from his private collection, though not in discrete shows. “I just want to mix it in with my work,” he says. The first historic group will be of the 18th-century artist brothers, Ubaldo and Gaetano Gandolfi, “because it has a relevance to portraiture”, Brown says. On A brush with… he explains that the Gandolfis were “not artists particularly known outside of Bologna, where they came from. Their drawing is mindblowingly good and clever and funny.” He hopes to follow them with Abraham Bloemaert, the Dutch Mannerist. “I have some nice paintings, and especially drawings, of his that it’d be nice to mix in.” Bloemaert’s drawing style “is absolutely exquisite” he says. “Bloemaert can draw Rembrandt out of the room.”

It is important to him that The Brown Collection is open to all rather than viewable by appointment. “The art world is full of exclusivity. And that’s one of the worst aspects of it. It should be as welcoming to all manner of people as possible, especially when it comes to education. As art education has become so expensive, it becomes so exclusive. And I’m part of a generation where further education was free and enabled an awful lot of people to go to art school that wouldn’t have otherwise gone. And I’m fully aware that that’s gone now and will have a big effect on culture, in a bad way.”