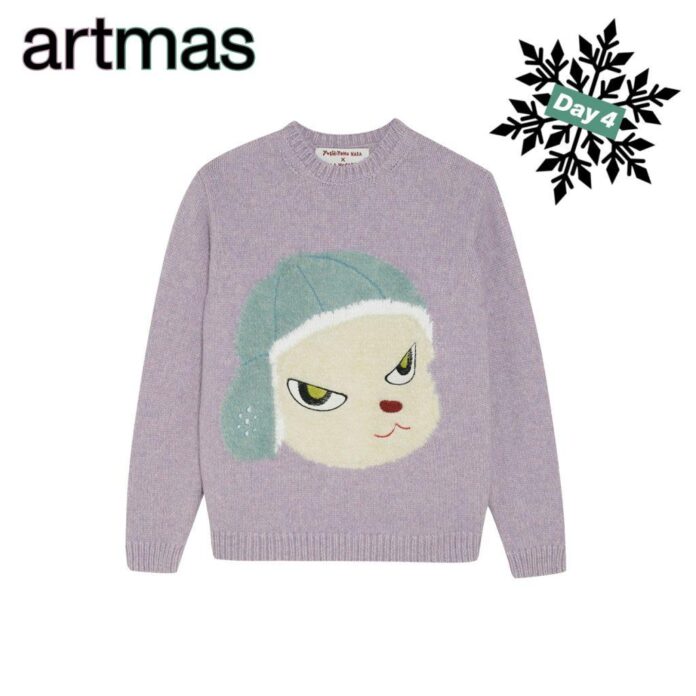 Since his first solo exhibition in 1984, Japanese Neo-Pop artist Yoshitomo Nara has imbued the small protagonists of his paintings and drawings with an emotional intelligence far beyond their years. His so-called “big-headed girls” revel in a sarcastic kawaii, a droll petulance à la Wednesday Addams that has earned the artist an international cult following.

The endearingly puckish children that have defiantly stomped about Nara’s canvases through his roughly 40 solo shows since that debut have been given new life courtesy of Stella McCartney. (This is the duo’s second collaboration—their first foray was unveiled at the Centre Pompidou in 2021, during Paris Fashion week.)

Herself no wallflower, especially vocal on issues regarding animal cruelty and sustainability, the British designer forms a natural yin to Nara’s yang. Both are disruptors in their respective fields, united in their non-conformist approach.

Part of McCartney’s spring 2023 collection, the spirited capsule of tee shirts, hoodies, denims, cardigans, and pajamas features Nara’s intrepid little warriors emblazoned with imperatives such as “Don’t Waste Another Day” and ​“Stop the Bombs.” Every piece in the collection is cruelty-free with sustainability in mind, down to the vegan-leather accessories, “fur-free fur” pool slides, and organic-cotton canvas hats.

Among the unisex looks (why limit who could wear that glam message?), this wool-blend jumper feels especially appropriate for the season. You can think of it as an update to the ironic Christmas sweater; who needs a dowdy Santa when you can have a sassy, intarsia-knit “Mission” sheep?