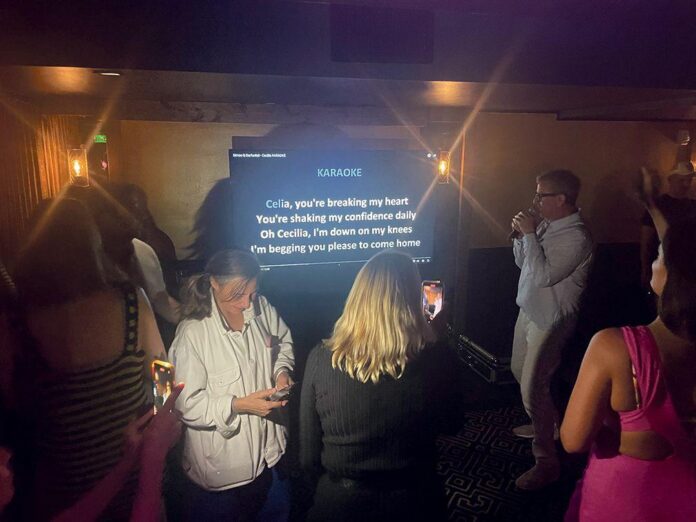 Keeping pace with the karaoke king

Guests at Pace gallery’s party this week were treated to the dulcet tones of Marc Glimcher, who we can now proudly declare is Miami’s new karaoke king. The gallery boss stole the show at the Regent Cocktail Club, crooning away to Cecilia by Simon & Garfunkel and Sweet Caroline by Neil Diamond—a classic for fans of both karaoke and English football. In between his soaring solos, Glimcher threw some impressive shapes on the dance floor, surrounded by clients and adoring fans. We asked outgoing Art Basel chief Marc Spiegler if he would also be taking the mic but he politely declined (shame—we would love to have seen him give a rousing rendition of Gloria Gaynor’s I Will Survive).

Showing (and buying) works at Art Basel in Miami Beach is always a bit of a “gamble”—which is probably why visitors to the fair are loving a working casino at Meredith Rosen Gallery in the Survey section. Collectors and curators darting up and down the aisles can step into a world of decadence, indulging in a game of blackjack or roulette. Visitors especially like the friendly croupiers who dole out cards and life advice—and who doesn’t like the odd flutter alongside some art shopping? The casino, by the Belgian artist Guillaume Bijl, was first exhibited in 1984 at the Friends Society of S.M.A.K. art museum in Ghent. “Since its first exhibition… Casino has revealed our desperate attempts at fame and fortune, with humour and incisive critique,” a press statement says. At the original opening, police officers staged a real intervention, because they were convinced Bijl’s installation was an illegal casino. Let’s hope the Miami Beach police aren’t called to the convention centre.

Birthday bashes often end with a cake topped with sparklers—a fireworks display if you’re lucky. But on its 20th birthday, Art Basel in Miami Beach went one better with a “drone sculpture” display in the night sky, by the Amsterdam-based artist duo Studio Drift, called Franchise Freedom. Bystanders at the Miami Beach Convention Center were taken aback by the dramatic deluge of lights, which looked like a mass of shooting stars. The drones eventually spelt out “20 years—Art Basel Miami Beach”, eliciting gasps from onlookers.

The New York branch of the Fotografiska museum amped up the publicity for its upcoming show Hip Hop: Conscious, Unconscious with a Miami performance by the rapper Jadakiss. He took to the stage at the Temple Beth Shmuel, a synagogue usually used by Jewish Cuban expatriates, delivering some classics, including Ruff Ryders Anthem in homage to his late collaborator DMX. The travelling exhibition opens next January and celebrates what is considered to be the 50th anniversary of the hip-hop generation.

One of the hottest party tickets in town this week was the Hauser & Wirth bash at the celebrated Italian restaurant Carbone, which was attended by art world royalty—including the outgoing and incoming Art Basel heads Marc Spiegler and Noah Horowitz—and sporty superstars such as the tennis goddess Venus Williams. But there was genuine excitement when a certain Jonas turned up. “Oh my god, I love Joan Jonas,” shrieked a party-goer. “You didn’t hear me—it’s Joe Jonas,” responded a colleague above the din, who was at pains to point out that the dreamy pop singer was in the room rather than the established US performance artist (we know who we prefer).