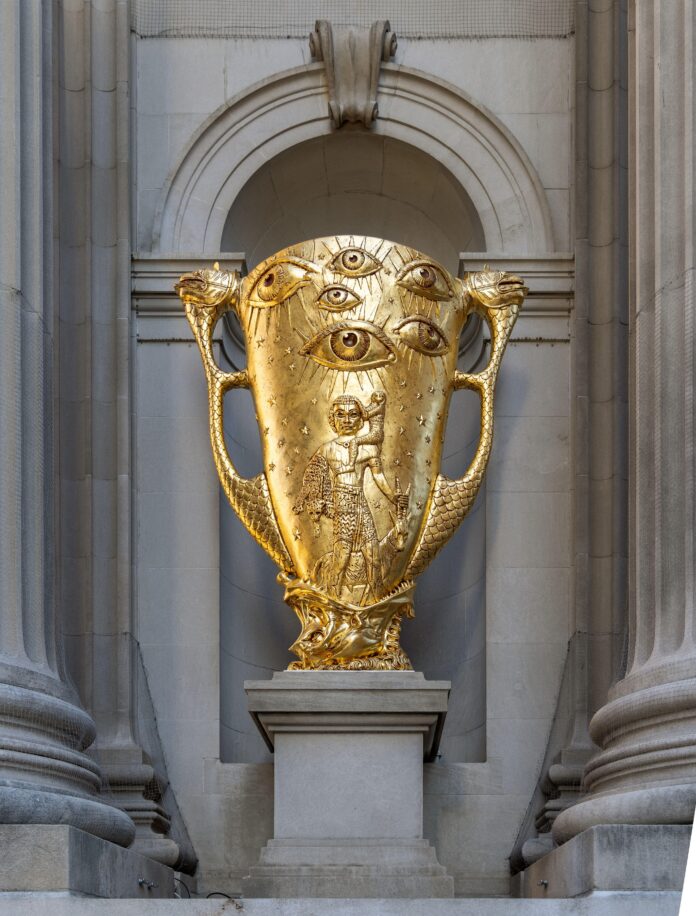 The Metropolitan Museum of Art in New York has unveiled the third installment of its annual façade commission, a suite of sculptures by the Guyanese-British artist Hew Locke titled Gilt, a pun on the word “guilt”, that theatrically reference the complex history of prized artefacts in the museum’s collection.

The installation features four remarkable gilded “trophies”, some of which are fragmented, that appropriate elements of pieces such as Domenico Guidi’s marble sculpture Andromeda and the Sea Monster (1694); the Hellenistic 2nd century BC “Fragmentary colossal head of a youth”, a cornerstone of the Met’s collection that was excavated in Pergamon in 1879; and a portrait of Alexander Helios, the son of Mark Anthony and Cleopatra, in Eastern dress.

The installation aims to consider the colonial entanglements of these treasured objects, deconstructing iconographies that reinforce the Eurocentric narrative through which history has been historically told.

“A façade is a face but not just any kind of face; a façade sits on top of another face, concealing and disguising at the same time,” Kelly Baum, the Met’s acting curator in charge and curator of contemporary art, said at a press conference today (15 September). “The stakes are high when it comes to façades. Power, wealth, prestige, status—these are just some of the very serious games façades play.”

She adds: “Hew’s sculptures are also façades—relatively thin reliefs that are unfinished on the back, two of them propped up by metal poles. Hew’s façades face hundreds of others. They are striking but also brilliant, smart, opinionated and incisive.”

The London-based artist, who was born in Edinburgh and raised in Guyana, often explores themes related to conquest and migration in his work. His work The Wine Dark Sea, H (2016)—which was acquired by the Met and featured in the Met Breuer’s exhibition Home Is a Foreign Place: Recent Acquisitions in Context in 2019-2020—evokes boats used in military and colonial expeditions and the slave trade. His commission The Procession at the Tate Britain in London features a carnivalesque gathering of life-sized figures that reference the displacement of refugees and communities impacted by resource extraction.

The Met’s façade commission series was launched in 2019 with works by the Kenyan-American artist Wangechi Mutu, followed by works by the American artist Carol Bove in 2021. “You couldn’t imagine, on one hand, a more prominent place that we can provide fine art, but on the other hand it’s a challenging place,” says the Met’s director, Max Hollein. “It’s a charged environment, and a charged question that we posed to the artist.”