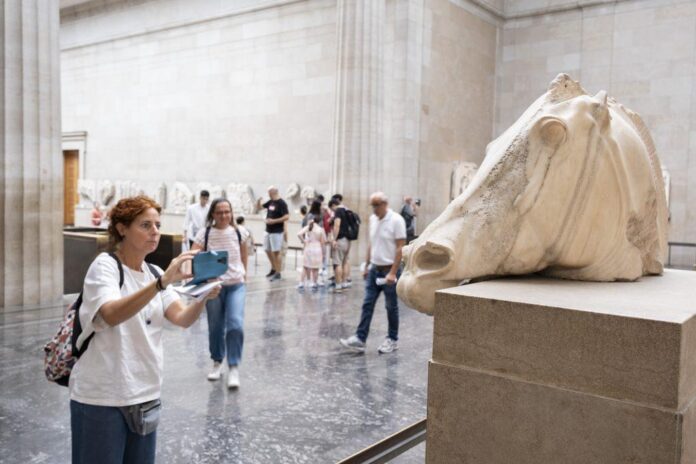 As arguments between the U.K. and Greece rage over who rightfully owns the Parthenon Marbles, the Institute of Digital Archaeology (IDA) has come up with a solution for the meantime: a near-perfect replica—made by a robot—which will go on view at the Freud Museum in London.

In January, the Oxford-based institute announced plans to replicate the Parthenon marbles, which originally adorned a temple to Athena atop the Acropolis, with a cutting-edge stone sculpting technology known as Robotor.

They wanted to forge a win-win solution for both the U.K. and Greece by making copies for the British Museum’s educational purposes, while returning the original, culturally significant artifacts home to Greece.

By August, the institute had taken 3D scans of the marbles, which have lived at the British Museum since Lord Elgin took them from Greece in 1801, under the auspices of the Ottoman Empire, as a gift to Queen Victoria.

British Museum staff denied IDA director Rogel Michel’s request to take those scans, but he and his team surreptitiously captured them anyways on tablets and smartphones—with help from security guards and floor staff.

“We regularly receive requests to scan the collection,” a spokesperson from the British Museum told Artnet News. “It is not possible to routinely accommodate all of these.​”

At last, the IDA has now completed a full-scale reproduction of the marbles’ Selene Horse, along with a metope depicting centaurs and lapiths battling at Peirithoos’s marriage feast, all from the same Pentelic marble as the originals.

ONE WEEK TO GO!!  Our exquisite Pentelic recreation of the Selene horse will go on public display in London on November 1st at the Freud Museum.  Stay tuned for details! https://t.co/dXLL5GjsEI pic.twitter.com/GHbW6SCR9z

The unveiling coincides with news of two antiquity-themed exhibitions coming to the Freud Museum in 2023: “Freud’s Antiquity,” and “Tracing Freud on the Acropolis,” director Giuseppe Albano told Artnet News.

An undated open letter on the IDA’s website notes that the British Museum says its goal is to educate, and then pointed to a comment from the institution’s deputy director, Jonathan Williams, saying that “People come to the British Museum to see the real thing,” referring to the IDA’s replicas.

Michel went on to point out that the museum already houses replica Parthenon marbles in two rooms adjacent to the Elgin Galleries.

If they do intend to teach, Michel pointed out that the IDA’s specimens would prove more useful—there’s pieces missing in the British Museum’s displays, and the marbles’ pure white hues misrepresent their original vivid colors. IDA copies can also pair with virtual reality, and be painted to closer match antiquity.

The British Museum’s spokesperson told Artnet News that it is “not in any discussions to replace the Parthenon Sculptures with replicas.”

When asked whether these replicas could in fact offer more utility to the institution, they replied, “There were visits from the Acropolis Museum facilitated in 2013 and 2017 for 3D scanning. These demonstrate the collaborative and enduring relationships that the British Museum enjoys with leading academics, museum partners, and communities across the globe.​”

Meanwhile, repatriation negotiations between the British Museum and Greek government are allegedly underway.

“A very sensible deal has been worked out and there is a fast and furious timetable for their conclusion,” Michel told The National, estimating negotiations will conclude before the Greek elections in 2023.

“The reality is that the British Museum is going to have [to] return a lot of things,” Michel continued. “It’s great to think that something that has been festering for 200 years can be resolved with technology.”