Home News How Ted Cruz Accidentally Got Caught Up in a Publicity Stunt for... 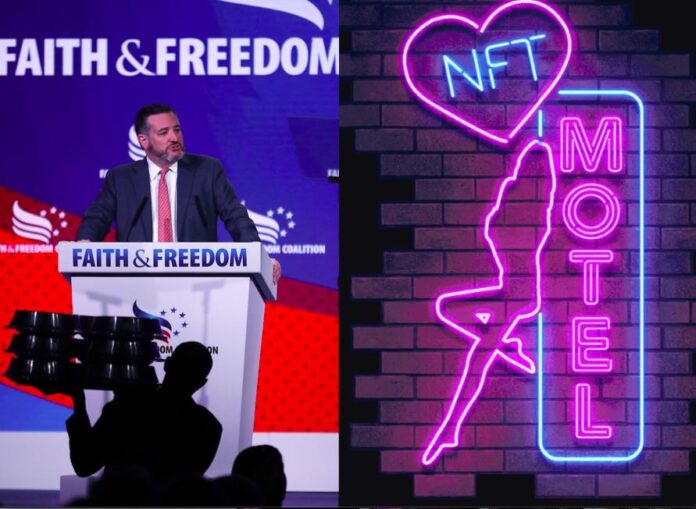 Remember that time Ted Cruz accidentally liked an adult-video Tweet? The incident was somewhat swept from sight when Cruz’s office blamed the incident on a rogue staffer. But the internet remembers, and there’s a reason people might be recirculating all the gifs from that incident now.

The Republican senator finds himself once again entangled with adult entertainment. This time, NFTs are involved.

It all began at a Yankees game last week, where the jumbotron panned to Cruz in the crowd and he was met with a chorus of boos. The ballgame visit was brought up on his podcast—yes, Ted Cruz has his own podcast called “Verdict with Ted Cruz,” and I listen to it religiously—and the conversation turned to a scantily-clad woman behind him at the game.

Co-host Ben Ferguson, who was not at the Yankees-Astros match-up, explained that the woman was a hot topic in the Cruz-overse during the game: “everybody’s tweeting me or texting me going, ‘Who is that sitting behind him?’”

As for Cruz himself, he explained. “My buddy Jeff leaning next to me, he sort of leans over and tells me, ‘Okay, she’s behind you. ‘She’s selling an NFT.’ So she had some sign and she’s selling it and she has—to use the Monty Python phrase, ‘She has great tracts of land.’”

He then remembered, “she was actually very nice—she and I took a selfie.”

Cruz, who once said that his life goal was to star in a “teen tit film,” talks about the enormous act of will it took not to stare at the woman’s bosom, which was printed with the pink text “NFT,” fearing that the image would be caught on camera and used to embarass him.

The senator’s comments on the NFT model drew a lot of attention this week. But who was the mystery woman? And what was the NFT project she was promoting? Some kind of Bored Ape thing? Was it World of Women? Was it art?

Some internet sleuthing determined that the woman’s shirt said either “NFT Hotel” or “NFT Hotel.” And sure enough, on Instagram we discovered an obscure NFT project called NFTmotel.io. The account was ecstatic for the attention that their model, who goes by Pippin DDD, had received by her proximity to Cruz.

What, you may wonder, is NFTmotel.io (besides a really bad idea for a motel)?

As it turns out, it is a start-up that promises to be an NFT-powered version of OnlyFans. “With never-before-seen blockchain technology,” it boasts, “NFTmotel.io is bringing Web3 Adult Entertainment to the next level, allowing customers to experience their favourite stars and models up close and personal like never before.” 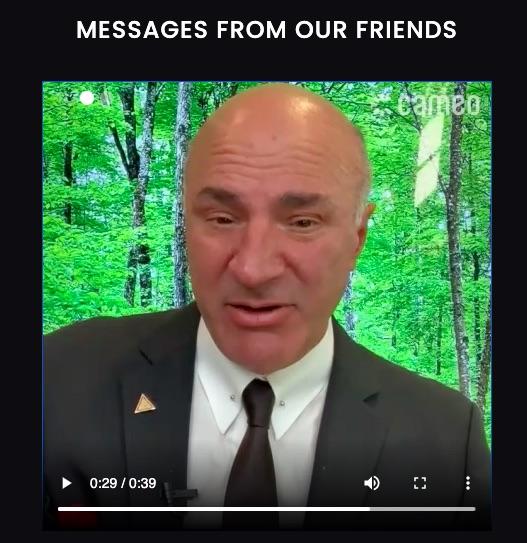 “Check it out—it’s entrepreneurial!” says Kevin O’Leary of Shark Tank in a pitch for NFTmotel featured on the project website.

Weirdly, the website also highlights video endorsements from two judges, Kevin “Mr. Wonderful” O’Leary and For Us By Us businessman Daymond John. In their shout-out to NFTmotel, neither man mentions the adult content part of the business. Both seem to think that they are endorsing an NFT experience that somehow supports “military families.”

So, on top of being an adult NFT, Cruz seems to have entered into an unwitting flirtation with a crypto-project of an at least mildly scammy nature.

The irony here comes from the fact that Cruz himself actually is a fanatical crypto booster. The senator made headlines when he introduced legislation that would limit the Federal Government’s ability to regulate digital currency. “I want Texas to be oasis on planet Earth for bitcoin and crypto,” he said earlier this year.