Home News How the Fine Dining Satire ‘The Menu’ Transformed the Film’s Kitchen Into...

The Menu, which opened in theaters in November 2022 and began streaming online earlier this month, has gathered critical acclaim for taking the slogan, “Eat the rich,” to its sinister—and literal—conclusion.

Directed by Mark Mylod, the satirical film sees a group of diners setting out by ferry for a $1,250 fine dining experience Hawthorn, a restaurant owned and run by a celebrity chef played by Ralph Fiennes. “Chef Julian Slowik worships in this place,” set decorator Gretchen Gattuso told Artnet News of the movie’s exacting antagonist. “His kitchen represents his church. It is a religious experience for him and all the chefs that work under him.”

As such, actual places of worship inspired the design of the kitchen at Hawthorn. In fact, two sizable metal beams situated on the back wall of the kitchen are meant to evoke “a sense of worship,” said Gattuso.

The kitchen set on , with metal beams forming a cross behind actor Ralph Fiennes who plays chef Julian Slowik. Photo: Screenshot from .

“Backlit, they created a cross shape that you see at the center. It also serves as a piece of symmetry that also reflects the symmetry with nature. It’s what drives our chef and the dishes he creates.”

One restaurant that was used as a reference point was Spanish chef Ferran Adrià’s restaurant, El Bulli, in Catalonia, Spain, “where there is a constant experimentation with dishes and spices.” Indeed, a spice wall composed of various small bottles can be seen in The Menu, which is a nod to El Bulli. 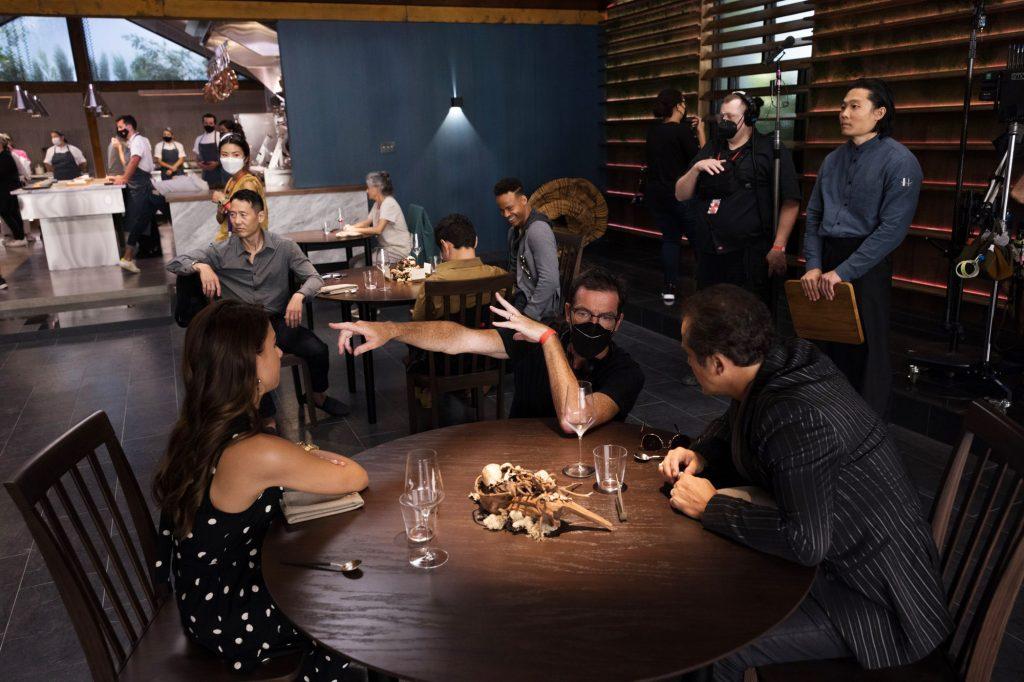 A key design element of the fictional restaurant is its open concept, allowing the customers to fully take in the cooking experience without any visual obstructions. While this certainly serves as an ideal way to film most scenes in one setting, it also established a clear juxtaposition.

On the chef’s side is a perfectly symmetrical layout—complete with marble countertops and an open flame grill, which added “a dangerous element and fit in with the story”—while the diners’ side boasts an asymmetrical glass window that overlooks the nearby shore. One side is perfectly manicured, while the other is a bit off-kilter.

Additionally, “materials used for the set and the decoration were all meant to feel organic; something that was harvested and available in nature.” The table centerpieces featured organic mushrooms, while wood clad with moss hangs from the ceiling.

Given that the film was shot on location at coastal locations like the Jekyll Island shore in Georgia, nature was also woven into the film’s biggest stars: the food. The point was “to create dishes that mimic the island itself,” said Gattuso; the results were veritable works of art.

Ethan Tobman, The Menu’s production designer, worked alongside chef Dominique Crenn of Atelier Crenn, a three-Michelin-star restaurant in San Francisco, to bring these dishes to life, creating plates that reflected the film’s narrative and character arcs. “Every item incorporated onto the plates,” Gattuso added, “went through an approval process.”

Food stylist Kendell Gensler, in addition to the film’s prop master, had to further make sure the dishes would be able to withstand the rigors of filming, from high-intensity lights to the long hours.

One standout dish is a roll of tortillas that have been customized for each guest, the flatbread imprinted with graphically depictions of their deepest sins and secrets. “The tortillas were a series of photo shoots and created graphics from our graphic designer,” said Gattuso. “They were etched with a laser using edible ink on actual tortillas that the actors ate.”

Of course, “the taste of the food wouldn’t be experienced on film,” he pointed out, so the visual presentation of the meals had to serve as “an extension of the dish itself.”