Home News Los Angeles Has Selected Six Finalists to Design a Memorial to the... 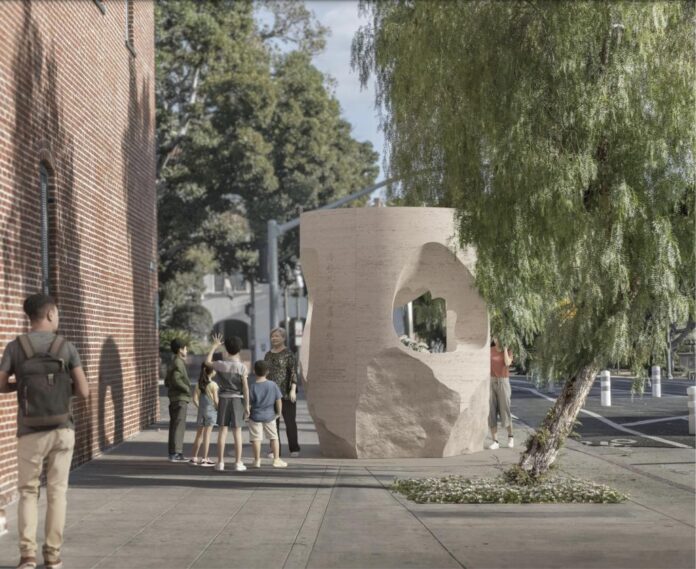 A major monument to one of the darkest chapters in Los Angeles history is now one step closer to realization, with the city selecting the finalists to design the 1871 Chinese Massacre Memorial.

The group is rounded out by a proposal from the Seattle architectural team of Sonam Lhamo, Jiawei Yao, Yiying, and the San Francisco architecture collective Figure x J. Jih, led by James Leng and Jennifer Ly in collaboration with J. Roc Jih.

“We recognize that facing injustices that occurred in our city’s history is not easy, yet it is important to remind future generations of the lessons embodied in the tragic Chinese Massacre of 1871,” Michael Truong, executive director of Los Angeles’s Chinese American Museum, said in a statement. “When the finished work is unveiled, we look forward to joining together in reflection and healing.”

On October 24, 1871, a mob of hundreds murdered at least 18 Los Angeles residents—or about 10 percent of the city’s Chinese community. The memorial to this racially motivated mass killing will be erected near the site of the massacre and the Chinese American Museum on the 400 block of North Los Angeles Street.

The massacre has not been widely remembered, with the only public memorial currently a bronze plaque in the sidewalk outside the Chinese American Museum. In recent years, efforts to bring the story out of the shadows have grown. In 2021, on the 150th anniversary of the tragedy, Mayor Eric Garcetti issued an official apology for the horrific event, calling for the city to build a memorial in his annual State of the City address. 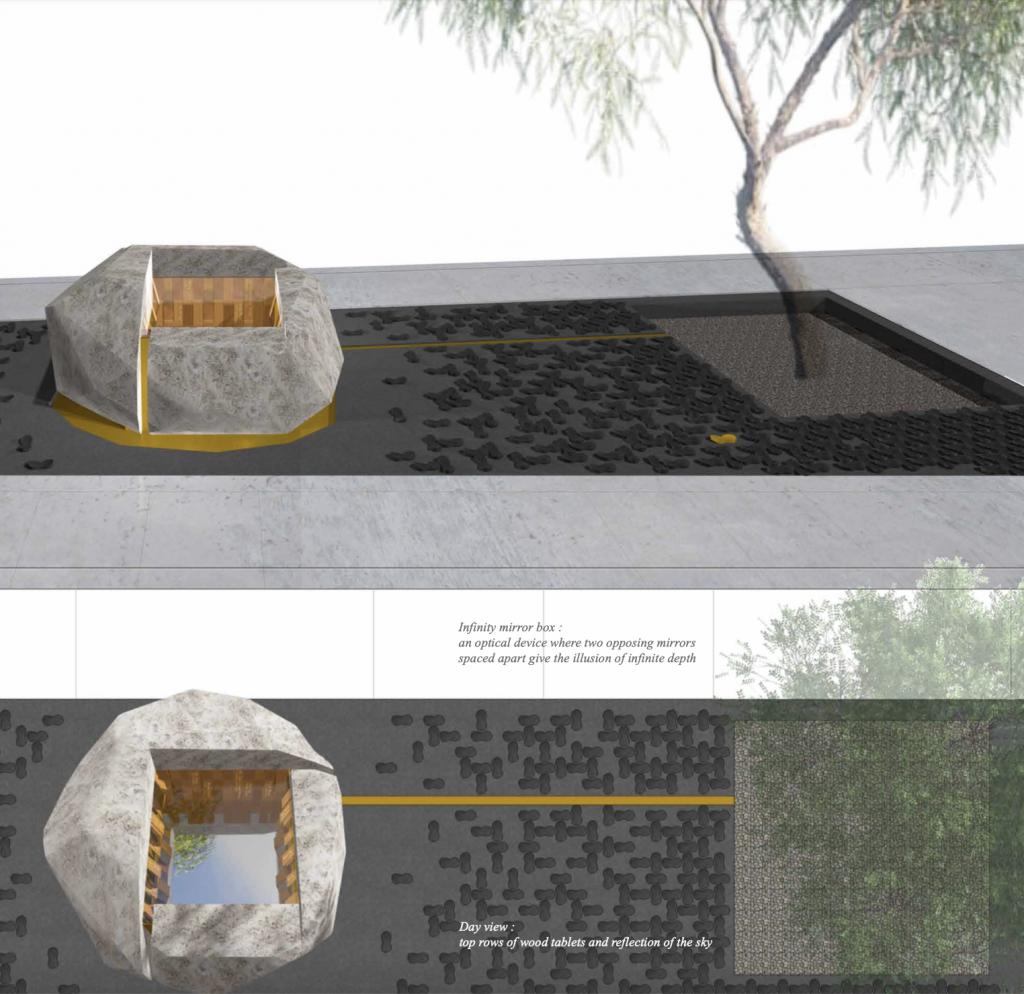 Fung and Blatt Architects, rendering for proposal for the 1871 Chinese Massacre Memorial in Los Angeles.

“Our Chinese and Chinese-American communities—then and now—are critical threads in the fabric of our rich cultural tapestry,” Garcetti said. “The 1871 massacre of innocent lives is a stain in our history that no monument can begin to erase. This memorial will serve as a public commemoration of the lives lost and a warning against senseless violence within our own communities.”

The project was announced by the Los Angeles Department of Cultural Affairs in August, with the submission period running through October 12. A panel of arts and design experts, including Museum of Contemporary Art, Los Angeles chief curator Clara Kim, rapper and activist Jason Chu, and Harvard Graduate School of Design architecture chair Mark Lee, reviewed the submissions during the “Request for Ideas” period.

The visions of each of the chosen finalists and dramatically different, in part because proposals could choose from two primary sites as well as a number of secondary sites as locations.

Some are quite compact. Fung and Blatt would set an infinity mirror box inside a broken boulder, placed on the ground amid a field of black ingots to reflect the sky. 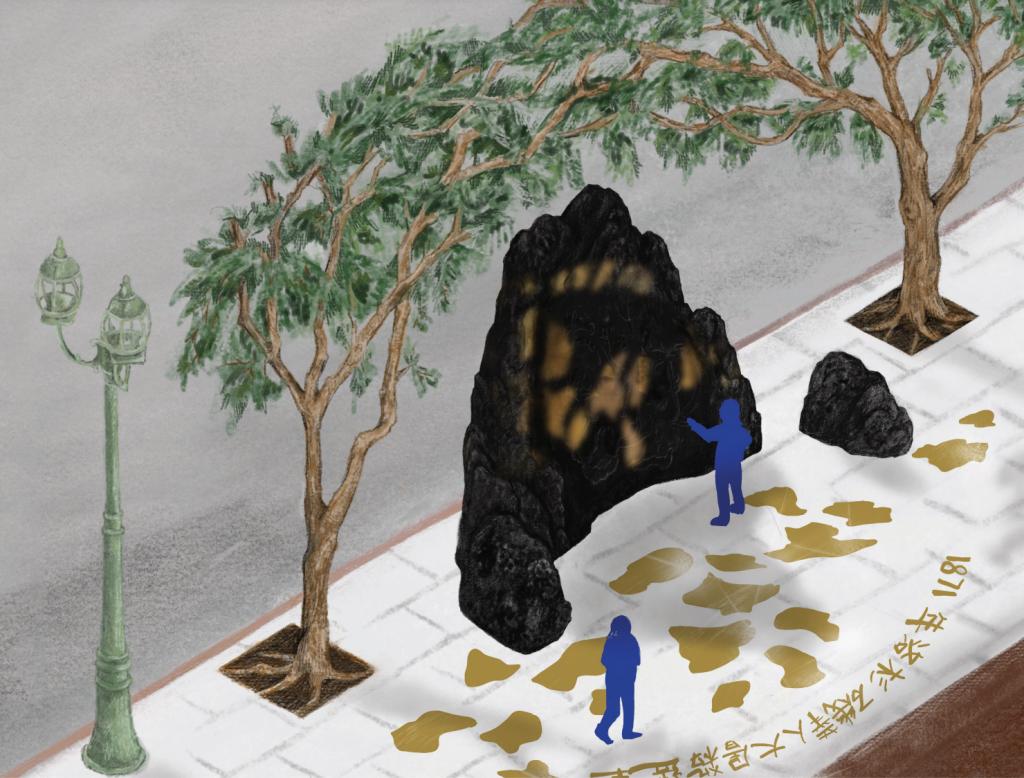 Frederick Fisher and Partners and Candice Lin, concept art for proposal for the 1871 Chinese Massacre Memorial in Los Angeles.

For her design with Frederick Fisher, Lin wants to place a monolithic black stone sculpture outside the Chinese American Museum, carved with a map of the spirit world to guide the victims of the massacre to peace in the afterlife.

Others are sprawling. Sonam Lhamo, Jiawei Yao, and Yiying envision a massive intervention called that would span the street, replacing brick with asphalt. Sew Hoy, Zhu, and Formation envision a “Memorial Colonnade” that stretches nearly a city block, with a “Flying Cord” connecting a set of 18 “Memorial Stelae” that make a chronology of the events of the massacre. 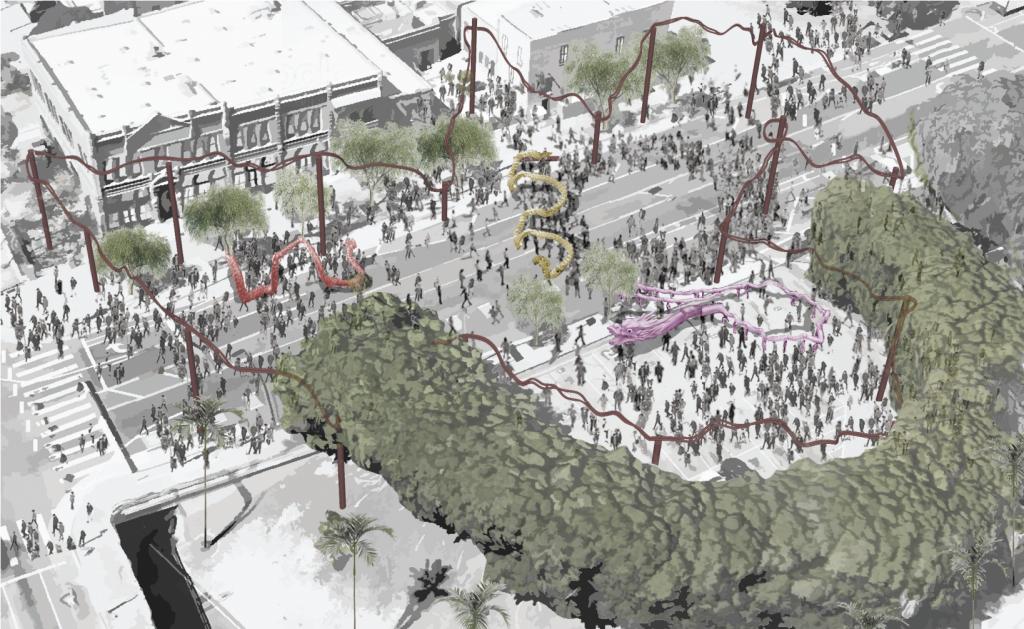 The proposals also draw on Chinese heritage. Inspired by the guardian banyan trees traditionally planted in Sze Yup in Kwangtung, from which many early Asian immigrants came to the West Coast, Leong and Chung would erect a petrified grove of stone trunks along a memorial path. The design from the J. Jih collective plants a garden within a circular limestone vessel, in an example of bonsai, the ancient Chinese art of creating miniature trees and landscapes.

Each of the finalists will receive a $15,000 stipend to further develop their ideas and present them to the community for review. A Zoom public engagement session is schedule for February, and the concepts can be viewed on the DCA website.