Home News I Put Lensa A.I. to Work on My Self-Portrait. The Results Were... 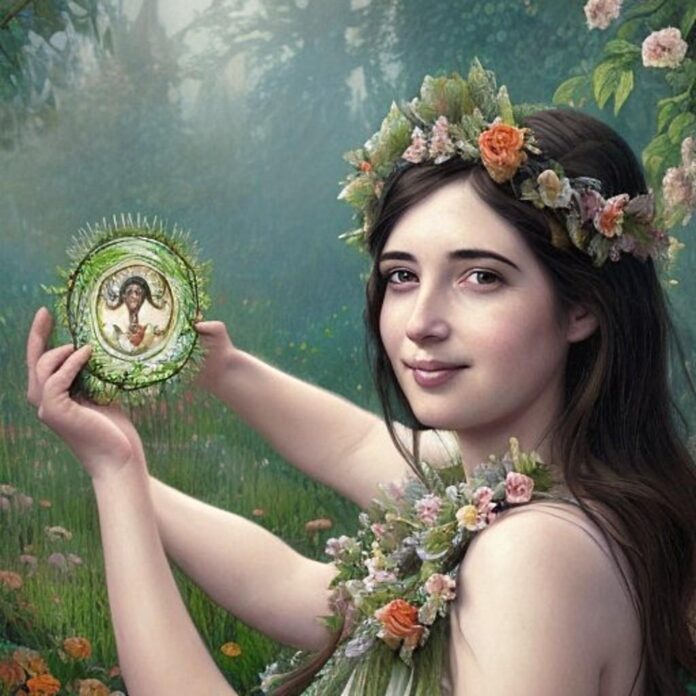 Like everyone, I’d been seeing the images on social media: A.I.-generated portraits that had turned your photographs into glamorous, fanciful, and vaguely airbrushed likenesses. I had no intention of using Lensa—but then my husband called my name excitedly across the apartment, asking me to check out the 100 artworks the app had just created based on 20 images of my face.

Neither my husband, Nathan, nor I had downloaded the Lensa photo editing app, but a friend had a trial period 50 percent discount on image packs, which normally cost $12 for 100. He had offered to run our faces through the app, and, without consulting me, Nathan eagerly sent over our photos. (H/T Vinh Trinh.)

There was no chance for me to weigh the moral implications of using the app—was the A.I. ripping off hardworking artists and potentially even putting them out of a job?—or the possibility that I’d be turning over my likeness to some kind of sinister advertising project.

Instead, I was already scrolling through what the app calls Magic Avatars, marveling at what Lensa had come with in a mere 20 minutes. 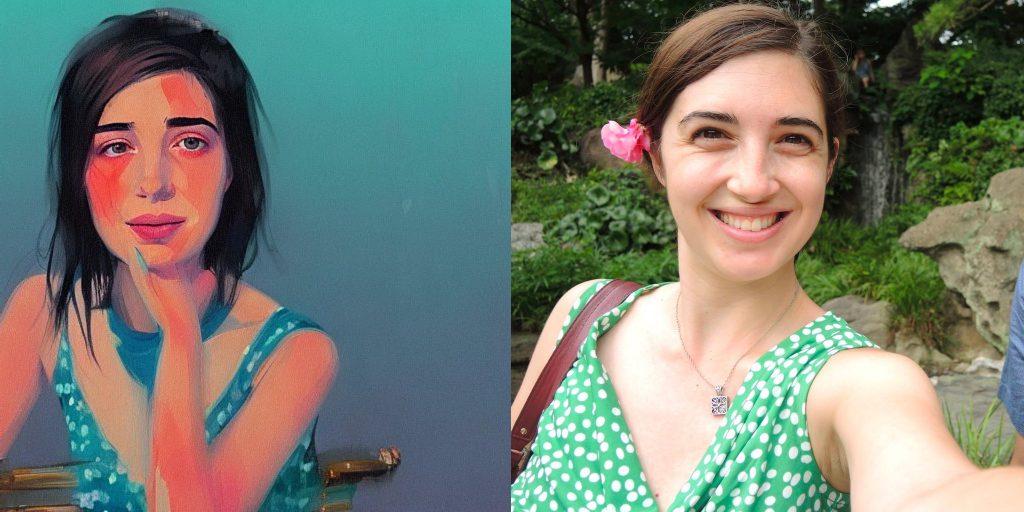 This Lensa Magic Avatar of Artnet News senior writer Sarah Cascone in what appears to be the “Pop” style compared to a dress she really owns—but was not wearing in any of the images used to train the app’s Stable Diffusion A.I. model. Image courtesy of Lensa, photo by Sarah Cascone.

While I’m not 100 percent sure which portraits matched each style, the results were, to put it mildly, a mixed bag. Some were downright remarkable likenesses—and there were even a couple that Nathan and I swore had recreated actual outfits we own but hadn’t been wearing in the photographs we provided. With others, it would have been a stretch to say we shared even the barest resemblance.

Regardless of whether or not the Magic Avatars looked like me, many were quite beautiful.

The cosmic ones, if I am identifying the themes correctly, had a bit of a space-age Art Nouveau vibe, with ornate ornamental costumes and backgrounds that vaguely recalled Alphonse Mucha. One, possibly one of the pop avatars, even looked a bit like an Alex Katz. (I am not sure if the resolution is high enough for it to work, but I’m tempted to print it on canvas!) 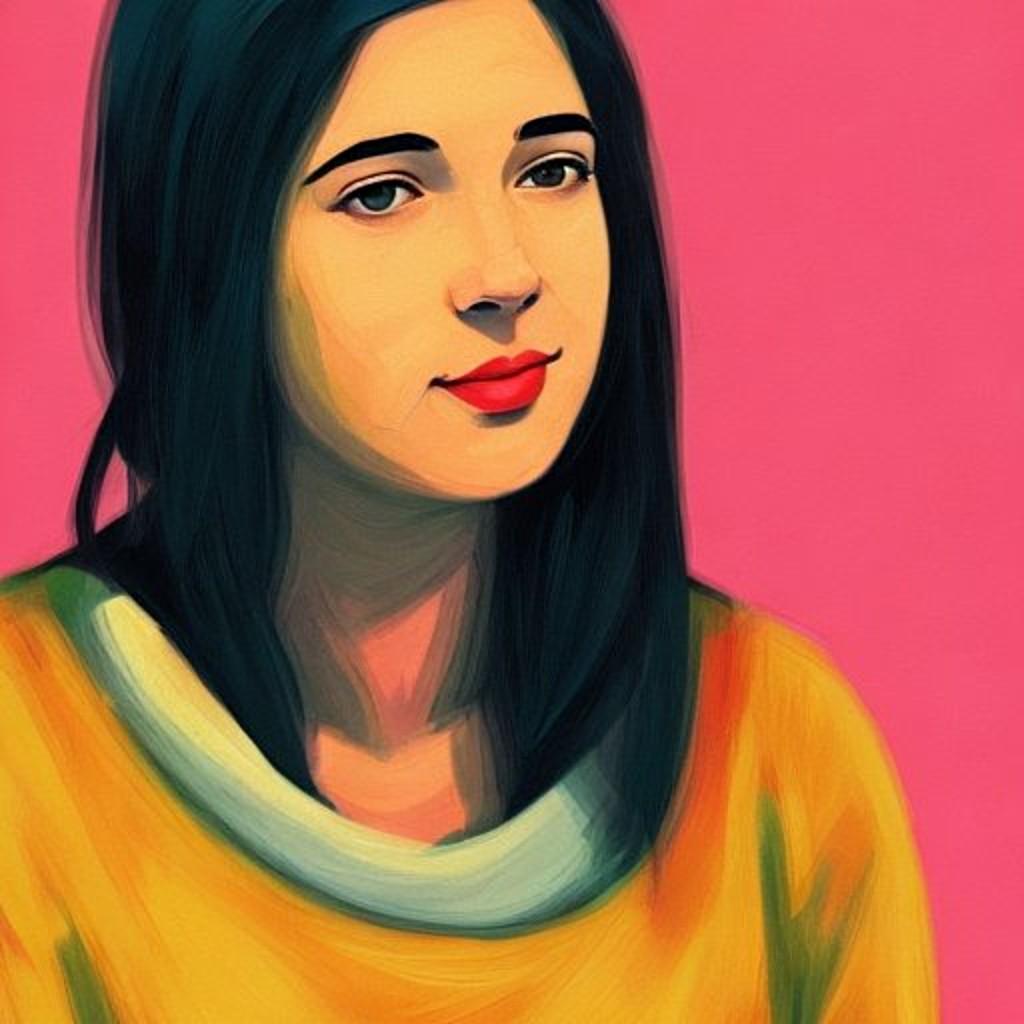 This Lensa Magic Avatar of Artnet News senior writer Sarah Cascone in what appears to be the “Pop” style is vaguely reminiscent of the work of Alex Katz. Image courtesy of Lensa.

Others had bizarre glitches, with distorted bodies and faces—one even had a creepy second set of eyes beneath the collarbone. And even the good ones often had extra fingers or limbs, or other strange mistakes.

My favorite, which I used as the featured image for this story, features the spitting image of my face wearing a flower crown, but with three arms. I look like an alien fairy goddess conducting some sort of ritual with a mysterious talisman, and I love it. 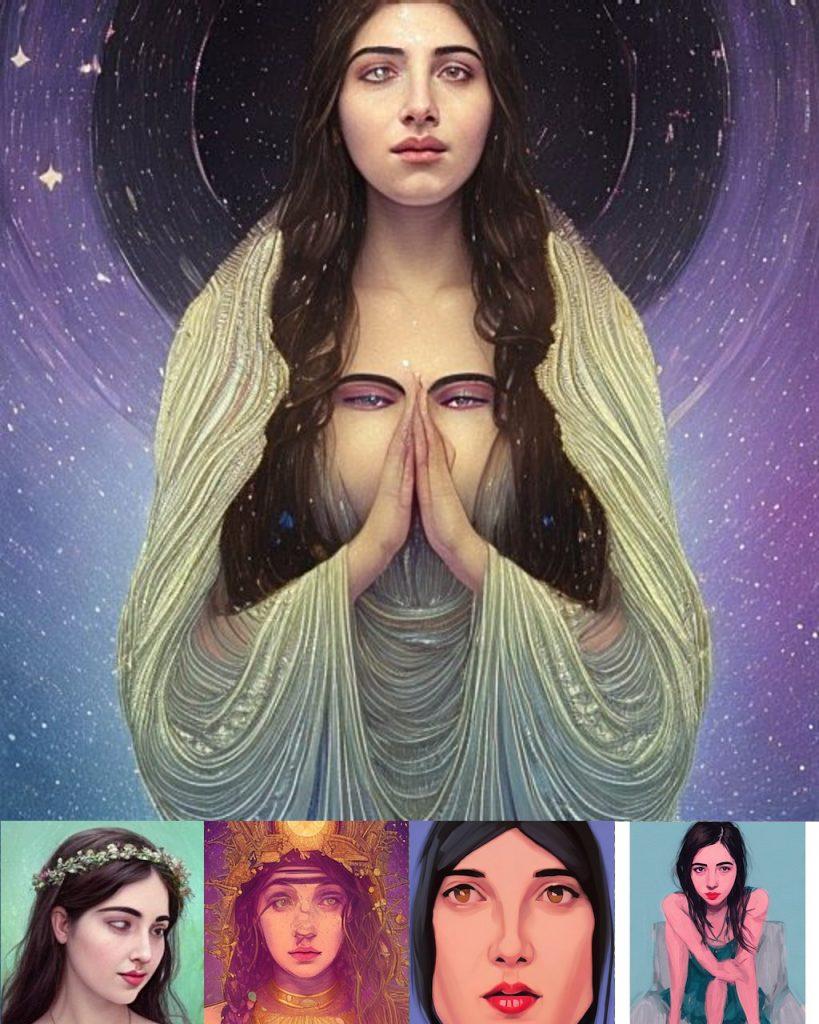 A Lensa Magic Avatar of Artnet News senior writer Sarah Cascone with an extra set of eyes, and other distorted faces. Image courtesy of Lensa.

The app trains the neural network anew on each user’s individual images, a process that involves an immense amount of computational power, conducting roughly 120 million billion mathematical operations every time.

Lensa promises that your photos and the model generated with them are permanently deleted from its servers after avatar delivery. (The Magic Avatar files for each user clock in at 4Gb, storage space which would add up quickly given the app’s current popularity!) 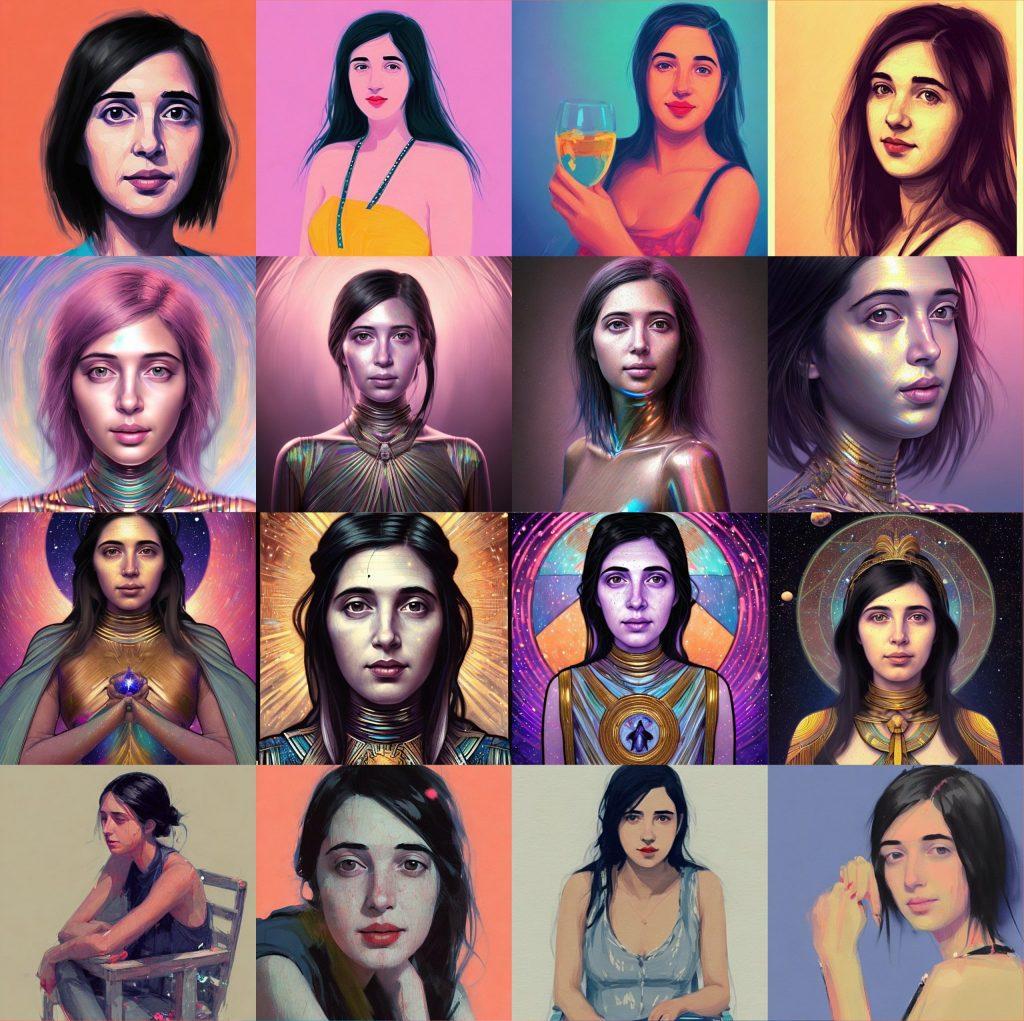 Some of the best Lensa Magic Avatars of Artnet News senior writer Sarah Cascone. By row, these appear to be the pop, iridescent, cosmic, and stylish themes. Images courtesy of Lensa.

There have also been some complaints, however, that Lensa is misogynistic, spitting out sexualized female portraits that are all-too-often scantily clad and well-endowed. There’s a reason for that.

The Stable Diffusion model was trained LAION 5B, a dataset of 5.85 billion image/data pairs, and the images it produces therefore reflect the societal biases present in its training material.

I will confirm that there was a fair amount of cleavage in my generated images, some bare shoulders suggesting out-of-frame nudity, and even one full-fledged topless shot with a robotic flair which I, uh, will not be showing you. (I already get the occasional creepy Instagram DM when I post a photo from a day on the beach, thank you very much!) 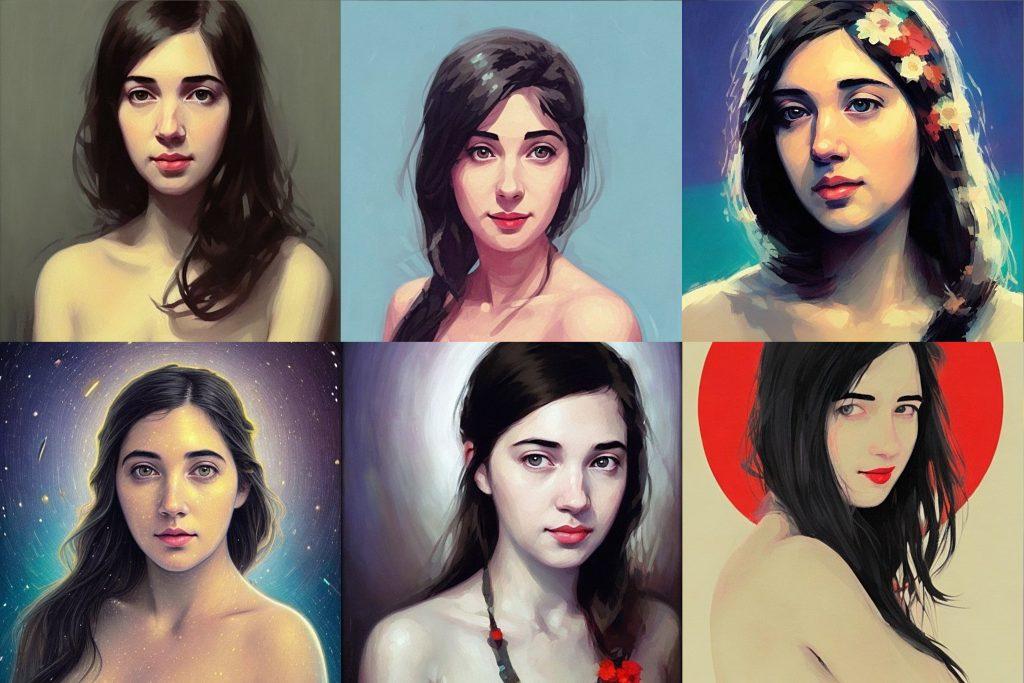 Prisma told Tech Crunch that it is working to create filters that will prevent the creation of nude Magic Avatars.

Other users have questioned the A.I.’s ability to accurately render non-white subjects. I was surprised to find that several of my avatars looked distinctly Asian, especially, if perhaps unsurprisingly, in the kawaii, cyborg, and anime themes.

Lensa Magic Avatars of Artnet News senior writer Sarah Cascone, from what appear to be the kawaii, cosmic, cyborg, and fantasy themes. Images courtesy of Lensa.

Lensa has also addressed concerns that some avatars contain what appear to be artists’ signatures, stating in its FAQ that Stable Diffusion is merely attempting to create images that look like paintings, and that it learned through trainings that paintings often have signatures.

What appears in a Magic Avatar, therefore, isn’t the remains of a signature from a real artist’s work, but fake letters that mimic one. 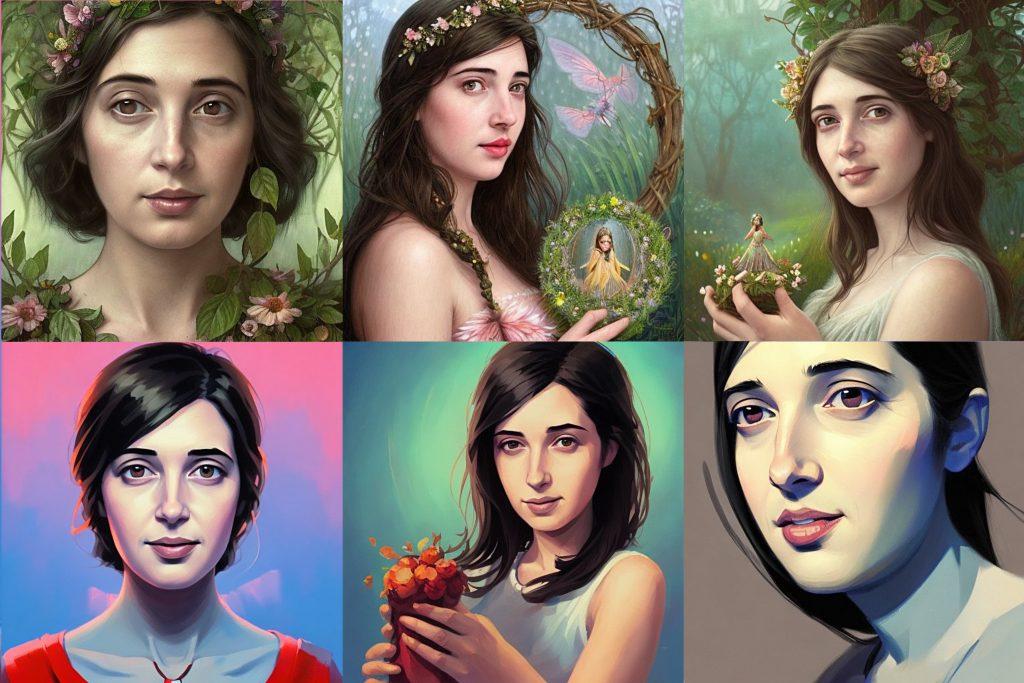 Some of the best Lensa Magic Avatars of Artnet News senior writer Sarah Cascone, from what appear to be the fairy princess and anime themes. Images courtesy of Lensa.

In the end, I ended up running two different sets of photographs through Lensa—the ones Nathan threw together, and a carefully curated set I compiled being sure to provide a variety of different angles of my face. The former actually had more accurate results, perhaps because most of the images were more tightly cropped to my face.

In my first glance at my Lensa results, I really did feel like I was staring at a (highly stylized) reflection with some of the images.

But now, the more I look through them, my sense of self is becoming less certain. Is that actually my mouth? Do my eyes really look like that? I feel as though I’m starting to doubt my ability to recognize my own face—a reminder that A.I. art remains strange new frontier, even as it grows more omnipresent.

What Are The Different Forms Of Arts In Canada?

‘The value of what was destroyed is incalculable’: Brazilian authorities assess artworks damaged by rioting Bolsonaro supporters