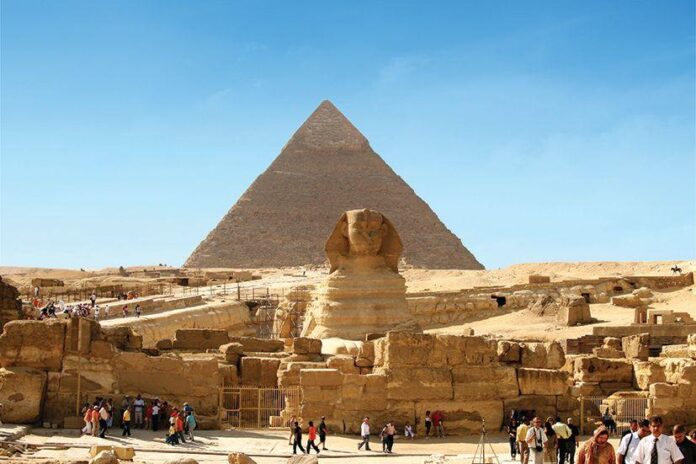 On 6 November, the 27th United Nations Climate Change Conference, Cop27, opens in Sharm el-Sheikh, Egypt. The location is telling: never before has a Cop summit taken place in a country so intimately connected to ancient antiquities, from the pyramids to the Sphinx and the tomb of Tutankhamun, all of which face growing threats from harsher weather, hotter temperatures and rising seas.

Zahi Hawass, Egypt’s former minister of state for antiquities affairs, warns that virtually all open-air archaeological sites in Egypt are at serious risk. “In my view, in 100 years, all these antiquities will be gone because of climate change,” he says.

At Cop27, delegates will consider whether museums should move away from their historic position of “climate neutrality” and towards climate action. But is the debate still necessary?

In 2021 the American Alliance of Museums commissioned a study that found museums ranked second only to friends and family as a trusted source, and significantly ahead of scientists, NGOs, the media, the government and businesses. Should this store of trust be deployed for the common good?

Robert Janes is a researcher at the School of Museum Studies in Leicester and was editor-in-chief of the Museum Management and Curatorship journal from 2003 to 2014. In the online publication The Beam, he writes: “Why is the global museum community not confronting climate change with its collective will and intelligence? One explanation is that climate change is a taboo subject—not to be talked about with family, friends and colleagues.”

This taboo must be demolished. “Radical changes are needed across society to ensure global heating remains below 1.5°C,” says Rodney Harrison, the professor of heritage studies at University College London. “Museums could play a leading role in these transformations, but they can only do so if they make significant changes to the way they operate and communicate.”

“The frustrating thing is—this is all already agreed,” says Henry McGhie, founder of climate consultancy Curating Tomorrow. “The governments of all the countries that are party to the UN Framework Convention on Climate Change [UNFCCC] and Paris Agreement already recognise this. They have adopted a new programme, but this doesn’t seem to have bled down to the workings of many museums. We have a golden opportunity to act on climate change as a sector, but we’re not making use of it.”

Beyond the Cop summits, the UN also played host to Mondiacult (the Unesco World Conference on Cultural Policies and Sustainable Development) in Mexico City this September. Held 40 years after the first Mondiacult conference, it focused purely on Unesco’s cultural policy, and how that relates to globally agreed sustainable development and climate change policies.

Speaking at Mondiacult, Audrey Azoulay, the director-general of Unesco, recognised that “despite progress, culture still does not have the place it deserves in public policies and international cooperation,” even though it plays a “fundamental role” in our lives. She welcomed the Mondiacult decision that culture should be included “as a specific objective in its own right” among the United Nations’ sustainable development goals. It was, she said, “a powerful signal” and “a commitment to action.”

Ernesto Ottone Ramirez, Unesco’s assistant director-general for culture and a former culture minister for Chile, told The Art Newspaper: “All ministers agreed we should leverage culture as part of sustainable development and environmental issues.”

However, some commentators believe Mondia­cult could have done much more. “It asked for culture to be operationalised in the UNFCCC, but that already exists,” says McGhie. “Rather than expecting other policy areas to change to incorporate culture, cultural policy should be much more overt about its role in existing agreements. This is a typical situation where policy development is not backed up with clear action.”

A new definition for museums was agreed at the annual meeting of the International Council of Museums in Prague in August 2022. Climate action was not included in the definition. The debate, then, continues, even as the pyramids crumble.