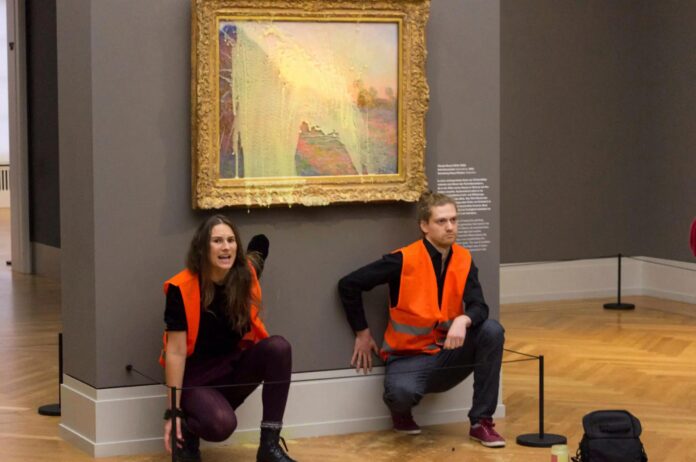 Two activists from the German environmental group Letzte Generation (left generation) threw mashed potatoes at a painting by Monet on 22 October. Haystacks (1890) was protected by glass and hangs in the Museum Barberini in Potsdam, west of Berlin. It is loaned to the museum by the German software billionaire Hasso Plattner, who bought it at Sotheby’s New York in 2019 for £97m (with fees)—a record for a work by Monet and the most valuable Impressionist work ever sold at auction.

A statement posted online by the museum said that the painting “had not suffered any damage according to the immediate conservation examination… on 26 October the work will be back on display in the galleries”. “While I understand the activists’ urgent concern in the face of the climate catastrophe, I am shocked by the means with which they are trying to lend weight to their demands,” says the museum’s director Ortrud Westheider.

The German group is following the lead of Just Stop Oil, another activist group which provoked intense public debate over whether important works of art should be targeted by protestors to further a cause after two of its members doused Vincent van Gogh’s Sunflowers (1888) in tomato sauce. The group says it attacked the painting in response to the UK government’s inaction on the cost-of-living and climate crises.

“We are in a climate catastrophe and all you are afraid of is tomato soup or mashed potatoes on a painting,” one of protestors at the Museum Barberini said, according to the Guardian. “You know what I’m afraid of? I’m afraid because science tells us that we won’t be able to feed our families in 2050.”

In August, protestors from Letzte Generation attached themselves to four masterpieces beginning with Raphael’s Sistine Madonna (1512-13) in the Gemäldegalerie Alte Meister in Dresden.

Letzte Generation has confirmed that it receives “financial support” from the Climate Emergency Fund, which was co-founded by Aileen Getty, the granddaughter of J. Paul Getty the oil tycoon and founder of the Getty Museum in Los Angeles. Getty has reportedly donated $1m of her personal wealth to be used to support environmental activist groups, including Just Stop Oil and Extinction Rebellion.