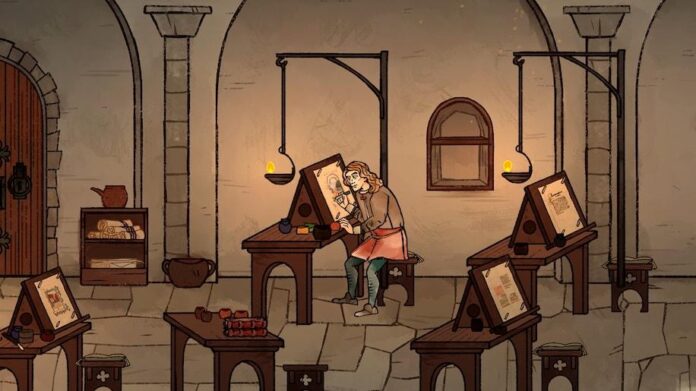 Art history buffs and video gamers don’t tend to have much in common, but Microsoft’s Xbox could help bridge that divide with a new game called “Pentiment.”

Inspired by illuminated manuscripts, the game’s title refers to an art-historical term that describes the reappearance on canvas of a previously painted-over image.

The narrative adventure game, as developers call it, allows players to assume the role of an artist working in 16th-century Bavaria, Germany, a time of social and political upheaval.

Players are tasked with solving a series of murders, and along the way can make dialogue choices that affect the story’s eventual outcome, kind of like a choose-your-own-adventure novel.

In a demo shown to media last week, the game’s developers at Obsidian Entertainment said they were pleased Microsoft gave them enough leeway to develop a setting that wouldn’t appear out of place in a Northern Renaissance art history textbook.

“Art history had a huge impact on the creation of this game, in part because it is a history game,” art director Hannah Kennedy told the . “At its core, this is a story about the experience of working artists at the time. So there was a lot to learn from art history, to inform that character and how they exist within this world about also inform how the space looks. It was fun to get to directly reference different art pieces within the story, make little nods to that because we feel that our audience will share a lot of interest with those same things that we find interesting.”

This isn’t the first time the usually disparate worlds of contemporary art and video games have found common ground. Earlier this year, for example, Hans Ulrich Obrist curated an exhibition called “World Building” at the the Julia Stoschek Collection in Düsseldorf that looked at how the expanded role of video games are finding fertile ground in certain strands of contemporary art.

That exhibition, which is up until December, includes work by artist and software engineer Sarah Friend, multimedia artist Lawrence Lek, and video artist Lu Yang, among others, many of whom deploy some aspect of play and programming into installations for the screen or console.

“I have this intuition that the future of public art is becoming more orientated towards games,” Obrist, the show’s curator, told Artnet News at the time.

So perhaps the contrast between art historians and gamers is like night and day—but maybe that makes for a beautiful chiaroscuro.

Dispelling Rumors, Greece Has Rejected the British Museum’s Offer to Return the Parthenon Marbles as a Long-Term Loan