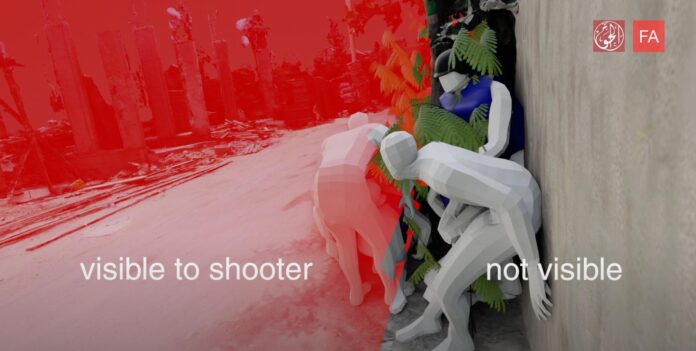 A report by the Turner Prize-nominated research agency Forensic Architecture and the human rights organisation Al-Haq has reached a damning judgement on the shooting of the Al-Jazeera reporter Shireen Abu Akleh. Drawing on new evidence and a spatial analysis of the site, Forensic Architecture and Al-Haq say they have “conclusively” demonstrated that Abu Akleh and other members of the press were deliberately targeted by Israeli forces on 11 May 2022 in Jenin. The findings were presented today at a press conference at the International Center for Justice Palestine at the Hague.

The report is based previously unseen footage and advanced spatial and audio analysis, and counters the report published in September by the Israeli Defence Forces, which found that the Israeli shots came as part of “indiscriminate” fire from “armed Palestinian gunmen”. The Forensic Architecture and Al-Haq report holds, instead, that there were no armed Palestinians present when the journalists were shot.

A spatial analysis of the site allowed them to create a 3D photogrammetry model of the scene, in which they reconstructed the positions of Abu Akleh and the other journalists, on the one hand, and the military vehicles, on the other.

The killing of Abu Akleh was a shocking event in the ongoing Israeli-Palestinian conflict, as it flouted the long-standing convention not to target the media. Abu Akleh, a Palestinian-American reporter, had been with Al-Jazeera for 25 years and was a well-known figure across the Arab world. A number of investigations have looked into her death, including one from the United Nations (UN) in June that found that she was killed by an Israeli soldier—which went against Israel’s original position that she was killed by Palestinian fire.

Abu Akleh and five other journalists were in Jenin to report on an Israeli raid of a refugee camp. They were wearing signs identifying them as members of the media, and were shot at by Israeli forces within armoured vehicles who were also stationed at the site, which the Forensic Architecture and Al-Haq report states was a distance of around 200m. Most accounts here confirm that snipers then opened fire with a series of “well-aimed bullets”, as described by the UN. Abu Akleh was shot in the head, and the journalist Ali Al-Samoudi in the shoulder, and an unarmed civilian who attempted to administer first aid to Abu Akleh was also hit.

Forensic Architecture, who are based at Goldsmiths, University of London, has opened a new Forensic Architecture Investigation Unit (FAI Unit) at Al-Haq in Ramallah. This is the FAI Unit’s second investigation, and the two groups gathered together new evidence and deployed new methodologies. These included previously unseen videos by Al-Jazeera correspondents and witnesses as well as drone and ground imagery of the site taken after the event.