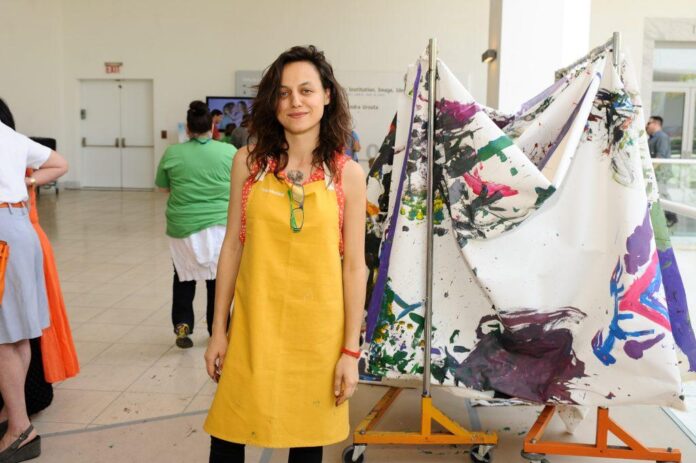 Iran-born, Los Angeles-based artist Tala Madani‘s artworks are nothing if not purposeful. Her images are incisive and witty, homing in on themes of geopolitical conflict through an art historical lens. Madani’s animations and paintings reflect a portrait of humanity as a cruel, beautiful, and conflicted species.

Right now, the Museum of Contemporary Art, Los Angeles is presenting the first-ever North American survey of Madani’s work from the past twenty years. In an exclusive interview filmed as part of Art21’s “Extended Play” series back in 2017, she explained how sketching plays a key role in her process.

“It’s the most immediate record of a thinking process, isn’t it?” Madani explains, adding that the act is a “great way of keeping track of your ideas, because you don’t necessarily have time or the space to investigate each idea as fully as you’d want.” Using her sketchbook as a sort of visual diary, the artist often returns to earlier pages to find gestures or characters to incorporate into future paintings.

When it comes to her most recent works, Madani uses the messiness of her medium to help dictate the arc of a narrative. “If there’s drips happening, I really engage those drips into bringing the audience quite close to where I am,” she says.

The resulting paintings are animated both by the process of their making and the story she illustrates. “I really love this idea that the painting itself has a life,” Madani says. “In a way, it’s about transference of energy.”