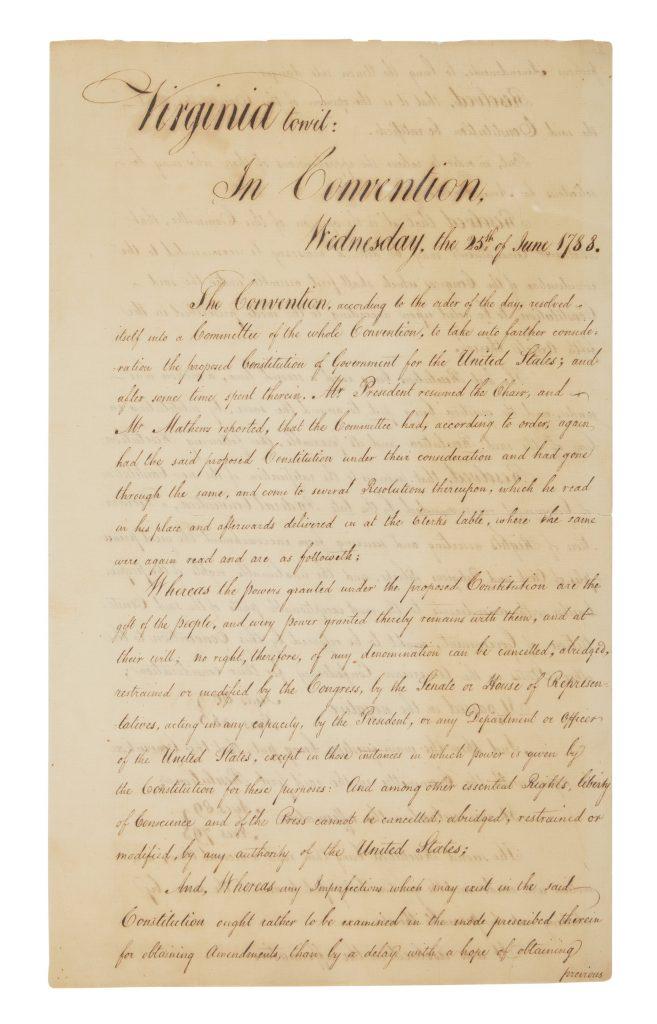 The 4th of July is normally a day Americans light fireworks, gather for cookouts and celebrate the nation’s independence from Britain. This year, Sotheby’s has a special historic sale in store to add to the celebrations.

To mark the nation’s founding, the auction house is offering a rare, direct precursor to the Bill of Rights, the list of 10 amendments to the U.S. Constitution, set within a copy of Virginia’s official ratification of the founding document. With a pre-sale estimate of between $3 million-$5 million, the historic object will be on public view at Sotheby’s York Avenue galleries in Manhattan from July 12–20, ahead of the live auction on July 21 in New York.

Signed and dated to June 1788, the document is part of the auction house’s sale of fine books and manuscripts including Americana. It includes important passages that were submitted to Congress of concepts that would later form the backbone of the Bill of Rights, which was ratified in 1791.

“This copy of Virginia’s Official Ratification of the United States Constitution holds immense significance, as it includes an enumerated proposal for a Declaration of Rights,” says Selby Kiffer, Sotheby’s International Senior Specialist for Books & Manuscripts. “This integral document provided a precursor for the Bill of Rights—one of the nation’s three founding documents—and solidified the nation’s future upon Virginia’s ratification.”

For the last 30 years, the item had been in the collection of the renowned manuscript collector David Karpeles, who died in Santa Barbara in January, aged 86. The proceeds from the sale will benefit the Karpeles Manuscript Library Museums, one of the largest and most important private manuscript collections in the world, with locations around the U.S.

This sale follows the record-breaking auction of a first edition of the U.S. Constitution for $43.2 million at Sotheby’s last year. That document went viral after a group of cryptocurrency populists called the ConstitutionDAO raised $46 million in less than a week to try and buy it. But billionaire art collector Ken Griffin swooped in to place the winning bid on the item, making it the most expensive book, manuscript, historical document or printed text to ever hit the auction block.

Art during the plague. How artists around the world depict the coronavirus